Hillary the Hawk does it again: Asked about her Wall Street ties, Clinton again invoked 9/11

When CBS asked her about the millions she received from Wall Street, Hillary Clinton yet again invoked September 11 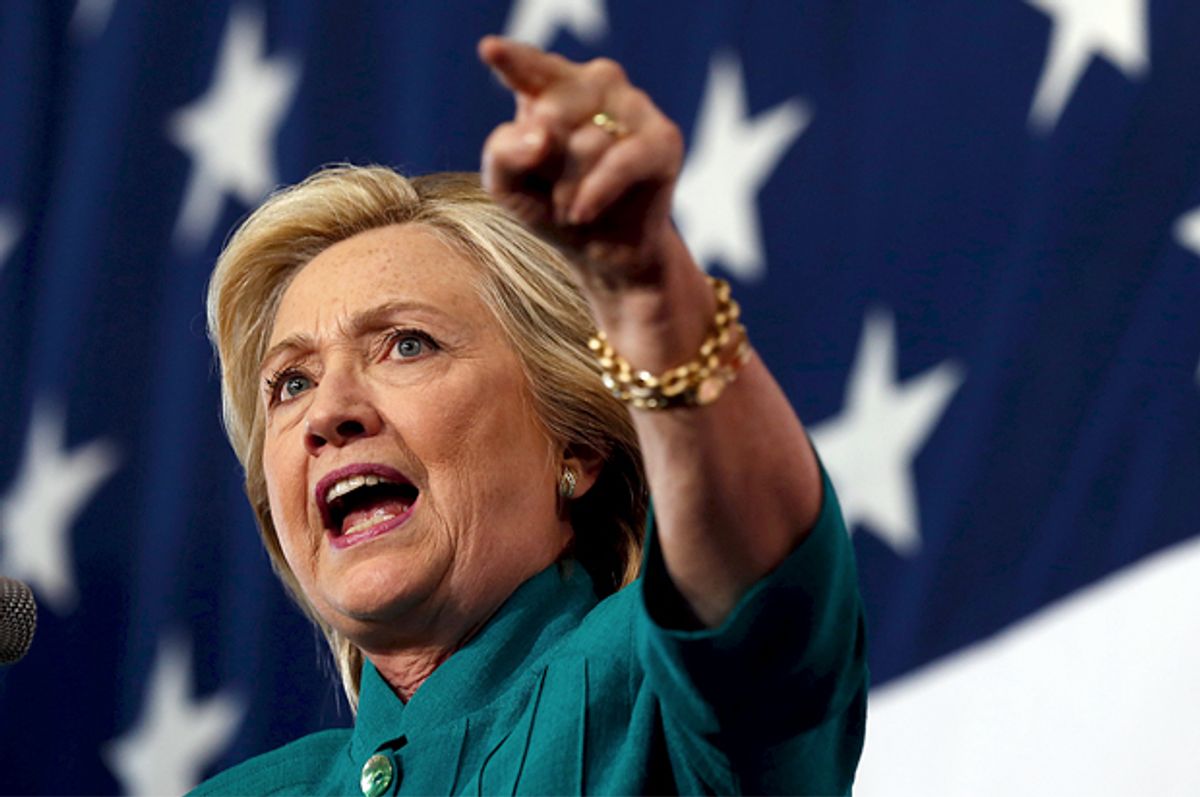 Hillary Clinton is by far the most hawkish of the Democratic presidential candidates. She supported the internationally illegal Iraq War; helped lead the NATO bombing of Libya, famously remarking "We came, we saw, he died" when Muammar Qadhafi was killed; oversaw the U.S. drone war, in which targets are assassinated without charge or trial; previously defended torture; and said in her 2007 campaign for president she would consider dropping nuclear bombs on militants in South Asia.

In the first Democratic presidential debate, Clinton's hawkishness was made loud and clear. She boasted about being an enemy of Iran, and about having imposed harsh sanctions on the Islamic Republic. She also called for a military-backed no-fly zone in Syria.

In the second debate, Clinton stood behind her hard-line militarist stance. Perhaps the most controversial moment of the night was when Clinton, when asked about her close ties to Wall Street, from which she has received millions of dollars in contributions and speaking fees, responded by invoking the September 11, 2001 attacks.

"I have never heard of a candidate, never, who has received huge amounts of money from oil, from coal, from Wall Street, from the military-industrial complex, not one candidate say, oh, these campaign contributions will not influence me," remarked fellow presidential candidate Bernie Sanders in the debate. "Why do they make millions of dollars of campaign contributions? They expect to get something. Everybody knows that."

Clinton immediately replied, "I represented New York on 9/11, when we were attacked. Where were we attacked? We were attacked in downtown Manhattan, where Wall Street is. I did spend a whole lot of time and effort helping them rebuild. That was good for New York. It was good for the economy, and it was a way to rebuke the terrorists who had attacked our country."

The response was widely recognized as the worst gaffe of the night. Many of Clinton's supporters admitted it was a mistake -- but only that, a mere mistake -- and moved on.

Although Clinton's campaign and advocates may have tried to reduce the hawkish Freudian slip to a slip of the tongue, however, Hillary has yet again fallen back on the 9/11 attacks when asked about her ties to Wall Street.

In an interview with CBS released today, her first TV interview since the November 13 Paris attacks, Clinton defends both her hawkish positions and her closeness to Wall Street.

Host Charlie Rose asks, "Have you suffered from the fact that they say you are too close to Wall Street? Has that hurt your image, in your judgement, running for president?"

"I have stood for a lot of regulation on big banks and on the financial services sector. I also represented New York and represented everybody from the dairy farmers to the fishermen," Clinton replied, adding, "And did I help rebuild after 9/11? Yes, I did."

Clinton's latter response is not as angry and belligerent as her former answer in the debate, but she still resorted to base jingoism to justify her political record and to distract from her close ties to Wall Street -- which has made her a multimillionaire.

You can watch the aforementioned clip from the exclusive CBS interview here: