What "Jessica Jones" lost in the move to TV: We'd rather watch a woman be abused than heal

The comic "Alias" is about recovering from trauma—but in the acclaimed Netflix adaptation, it hasn't stopped 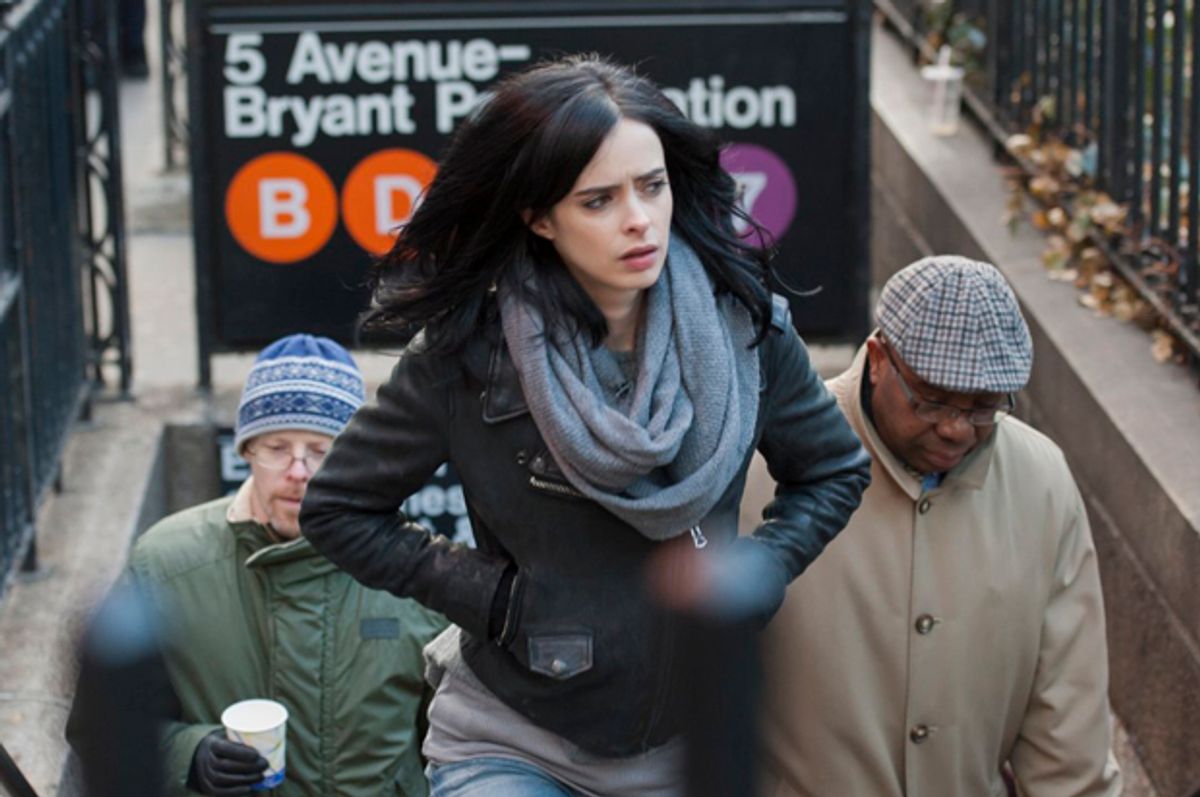 Most comic adaptations come with some headaches. There may be decades of continuity, multiple versions of a character, reboots, retcons and a slew of creative teams who have completely shifted the tone and feeling behind a character several times. Netflix’s newest Marvel Comics adaptation, “Jessica Jones,” based on the comic “Alias,” should have a relatively smooth path to adaptation. The titular Jones starred in “Alias,” created in 2001 by Brian Michael Bendis and Michael Gaydos, for 28 issues. Bendis wrote every issue, and Gaydos drew everything except a few highly stylized flashback sequences. It was an incredible and fully complete story, with thematic explorations that were way ahead of the pop culture curve. At 22 pages per issue, "Jessica Jones" showrunner Melissa Rosenberg and the writing team (including Gaydos and Bendis, who according to IMBD have writing credits on every episode) could have fit every page of the series into 13 hours of TV.

Even if some events had to be changed due to rights issues (Fox is still hoarding the “X-men”), and actor price tags (Thor can show up in any comic that gets drawn, but Chris Hemsworth is pricey), it should have at least been easy to transfer the tones and the themes of the source material to the small screen. But the show adopted a different approach instead. The comic “Alias” is about healing from trauma. The show “Jessica Jones” is about watching someone’s ongoing abuse.

In “Alias,” Jessica Jones is a former superhero turned private eye. She drinks hard, smokes and self-sabotages. She has some sex with Luke Cage that she regrets, and has some other embarrassing interactions with men caused by alcohol. Calling Jones an alcoholic is complicated, but it’s definitely fair to say booze isn’t her friend. And yet she helps people. It’s never epic or expansive. She takes on low-level cases that sometimes have a connection to the larger Marvel Universe, but she never saves the world — not even the neighborhood.

After 23 issues of Jones struggling with her own destructive tendencies, and doing her best to be a good person despite her deep-down suspicion that she is a piece of crap, The Purple Man, AKA Kevin Kilgrave, is introduced. Over the course of the next five issues readers learn that Jones is self-destructive because she was held under Kilgrave’s mind control for eight months, and the abuse and trauma she experienced during that time led her to a very dark place. That story line (and the series) ends with Jones punching Kilgrave through a car window, but it’s worth noting that the action starts with Kilgrave safely locked up. Fellow survivors seek Jones out and ask her to help them get Kilgrave to admit to some of his crimes that haven’t officially gone on record. The families of his victims feel like they need the closure of Kilgrave admitting what he did. Jones can go to the Marvel Universe’s worst prison, The Raft, and interrogate Kilgrave. Or she can not go. She can choose between facing her greatest fear and telling the grieving families to fuck off. In a powerful moment of agency Jones chooses, with no impending threat or violence, to face her greatest fear in order to help people.

Throughout its run, “Alias” is about Jessica Jones employing this agency to make choices that help her heal emotionally. This self-healing is accomplished by helping others, an action that a great many belief systems suggest is key to being a good person. It’s about the real after-effects of trauma, and how difficult it is for survivors to pull themselves back to a place of strength and normalcy.

In contrast to the comic, in the first episode of Netflix’s “Jessica Jones,” we find out that Kilgrave is loose and stalking Jones. From that point on, every episode of “Jessica Jones” is about the epic battle between them. People die and are tortured, Jessica is beaten and assaulted multiple times. She sees people killing themselves or attempting to, which Kilgrave always attempts to blame on her. Every single episode features some traumatic event that can trigger PTSD symptoms, and almost every one of these events happens because Kilgrave is still actively torturing Jessica Jones. Jones only takes on three or four cases in the entire show (depending on how you define “case”), all linked to Kilgrave and the horrible things he is doing to Jones. “Alias” told the story of a woman healing from abuse. In “Jessica Jones,” we're still watching the abuse unfold.

The purposes and depictions of abuse of women on TV have come under greater scrutiny in the last few years as shows like “Mad Men,” “Game of Thrones” and other prestige adult dramas have ratcheted up the instances of sexual assault. “Game of Thrones” has particularly come under fire as an adaptation, as the show has written in rape scenes that didn’t exist in the books, and even sex acts that were consensual in prose have transformed to assaults on-screen. But the controversies surrounding its rape hasn’t diminished its viewership, or lessened its critical praise. People may be sickened and upset by what they watch, but by God they watch it.

Hitchcock is famous for his dictate to “torture the women.” It’s a suggestion that the “Jessica Jones” writers have taken to heart. While sexual assault isn’t shown in "Jessica Jones," rape is discussed, and when Jones confronts Kilgrave, it’s revealed that he raped her multiple times while she was under his thrall. In the comic “Alias,” Jones strongly denies that she was sexually assaulted by Kilgrave, and points instead to other mind games and tortures that Kilgrave was fond of. Of course it could be argued that Jones is in denial in the comic, but that seems to be missing the point. Why did the producers feel that Jones needed to have been explicitly raped? Are other formats of trauma not high-stakes enough for prestige TV? Does emotional abuse not translate to the small screen? Abuse comes in many different forms, and each kind of trauma is cataclysmic for its survivors. But every kind of abuse shares one common factor: the removal of choice and agency from the person being abused.

Lack of character agency and poor character development of on-screen survivors is often cited by critics as a reason that on-screen sexual violence is exploitive and unacceptable — not to mention that on-screen rape is too frequently used to forward a male character’s development. That isn’t the case in “Jessica Jones,” thankfully. But her agency is at risk with every turn in the show, to the point where it is structurally and thematically central to the show — Kilgrave obliterates his victims’ free will. That in and of itself is abuse, before he ever commits any further violence.

Compare to the comic: Due to Kilgrave’s late introduction in the comic series, Jessica makes her own choices in “Alias,” though her life choices are, of course, influenced by what happened while she was under Kilgrave’s control prior to the opening of the series. But thanks to the cat-and-mouse game dynamic established in the first episode of “Jessica Jones,” Jessica is never really making her own choices in the show — she's reacting to Kilgrave. There is a fairly typical scene where Jones “chooses” to sit down and have dinner with Kilgrave, because two people are standing by holding razors to their own throats. Jones can “choose” not to eat with Kilgrave, and then he will use his mind control to make the bystanders slit their own throats. Everything Jones does is in response to Kilgrave’s actions. He is the center of the plot, and Jones revolves around him. Her agency isn’t completely removed, but it is greatly compromised.

The choice by Rosenberg to ratchet up the active depictions of Jones’ abuse may come down, in the end, to tone, pace and expectations for a successful, binge-worthy TV show in today's crowded "peak TV" landscape. “Alias” was meditative and slow, full of wry humor and depth. It was tucked away in a sleepy little corner of the Marvel Comics universe, and its competitors were indie comics with small print runs. In contrast, “Jessica Jones” is part of the Marvel/Netflix slate that is hoping to compete with the heavy-hitters of cable — its competition is “Game of Thrones,” not “Love and Rockets.” When it comes to high-stakes drama, the suspense and shock of an action-packed conflict is more likely to get the audience’s pulses racing than a lost soul slowly finding peace. If “Alias” is about healing, the creators of “Jessica Jones” are betting that audiences would rather watch a woman be further abused and traumatized first. The positive critical reception and strong viewership of “Jessica Jones” seems to suggest that they are right.