White shooters live and maybe get a Whopper on the way to jail. Black suspects don't get the same royal treatment 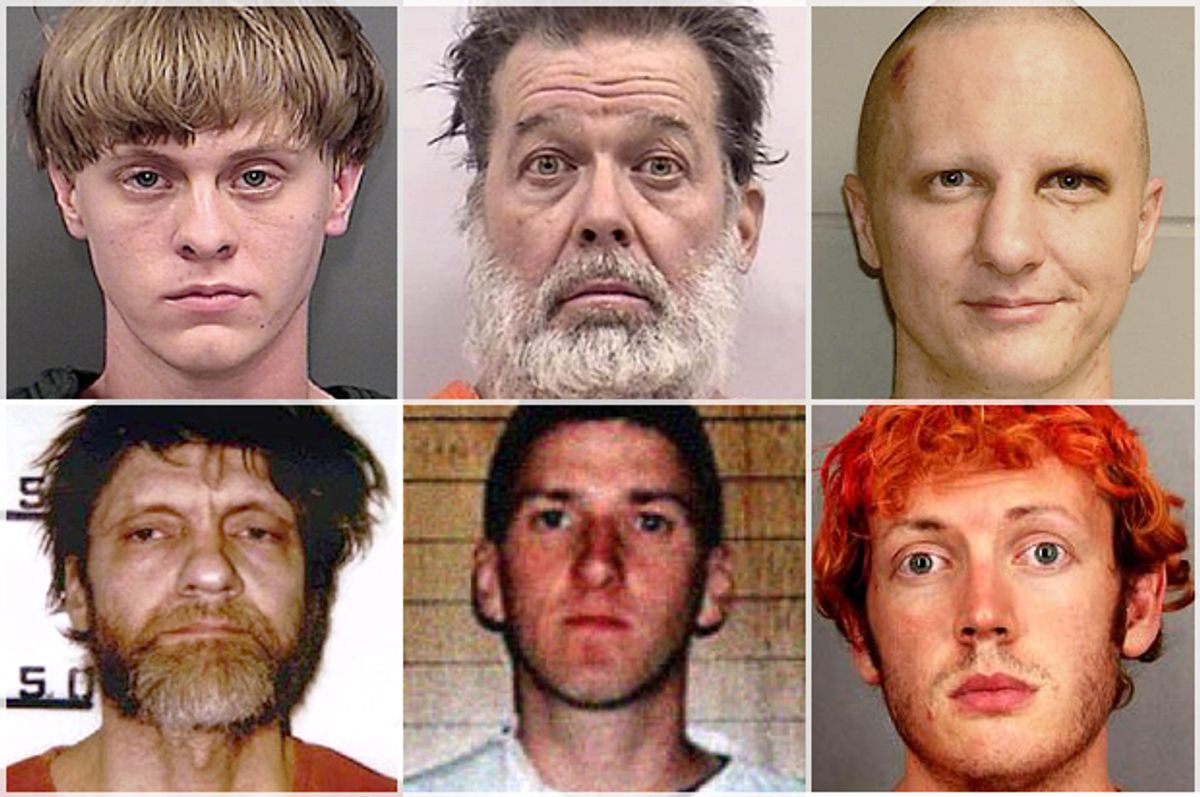 On Friday afternoon, a white man named Robert Lewis Dear attacked a Planned Parenthood office in Colorado Springs, Colorado. He killed three people and injured 11 others. One of the dead is a police officer. Dear then engaged in a several hours-long gun battle and standoff with local authorities. He was captured alive.

Robert Lewis Dear reportedly told police “no more baby parts” after being arrested. Apparently, Friday’s attack on Planned Parenthood is part of a longer pattern of violence by right-wing terrorists against the providers of women’s reproductive health services in the United States.

White privilege takes many forms. As was seen in Colorado Springs on Friday, white privilege also consists of being able to kill three people (including one cop), injure 11 more, and then survive unscathed.

Robert Lewis Dear is not the only white man to have used this unique and near exclusive type of privilege in American society. James Eagan Holmes killed 12 people and injured 70 in a mass shooting at a Colorado-area movie theater. He was not killed by the police. Jared Lee Loughner shot 18 people, killing six of them. He was taken alive by the police.

White people also have the unique privilege of brandishing guns in public without consequence—and to even aim them at America’s police and other authorities without being killed. White gun fetishists Islamophobes in Texas harass Muslims attending religious services.

“Open carry” advocates, almost all of them white men, routinely march in public with weapons.

Cliven Bundy, the Nevada rancher who refused to pay his grazing fees, used an armed militia to stop federal agents from arresting him.

In all of these instances—and many more—white people are not killed (and usually not even arrested or detained) by the police.

And in the case of Dylann Roof, the white supremacist who killed nine black Americans at Emanuel African Methodist Episcopal Church in Charleston, South Carolina, the police both arrested him without incident and then took him to Burger King for a meal.

By contrast, black and brown people are not treated so kindly by America’s police. Black Americans are shot, abused and beaten up by America’s police and other white-identified vigilantes while surrendering, sleeping, seeking help after being in a car accident, walking down the street, with their hands up, showing identification, standing in a crowd, listening to music, riding bicycles, playing in the park, and being totally submissive and compliant.

When a white person commits an act of mass violence he or she is “a lone gunman,” “mentally ill” or “disturbed.”

White men commit a disproportionate percentage of the mass shootings and domestic terrorism in the United States. Yet, their actions are never taken to be reflective of white men as a group. The mere suggestion of this basic fact is met with outrage by Republicans and the right-wing news entertainment complex. However, when an “Arab” or a “Muslim” commits a crime, said event is processed by the White Gaze as an indictment of an entire population and to summon the boogeyman of “Muslim Terrorism.”

In all, whiteness is freedom from collective responsibility and indictment; to be the Other is an a priori assumption where the actions of one non-white person means that all members of the group should be punished and made suspect.

White people, even those who have committed horrific crimes, survive their encounters with America’s police for a variety of reasons. Primarily, the lives of black and brown people are systematically devalued in American society. This is demonstrated by how black Americans have shorter life spans, earn less money, possess less wealth, receive substandard medical care, go to worse schools, and live in under-resourced neighborhoods as compared to white Americans. The police, like Americans as a whole, are taught to devalue the lives of black people by a news media and broader popular culture that routinely circulates stereotypical, racist, debased, and derogatory images of non-whites.

American society also suffers from very high levels of racial segregation—research from the Public Religion Research Institute shows that 75 percent of white people do not have one non-white friend. Other research shows that white Americans lack empathy for the suffering, pain and humanity of non-whites.

The sum effect of all these cultural forces is that America’s police are much more likely to kill and abuse black and brown people than they are whites. Police are enabled in this routine violation of the human rights of black and brown people because the former are rarely if ever prosecuted (or even charged) for their crimes. America’s police are also protected by a white American public that supports a racist criminal justice system.

People chant “Hands Up, Don’t Shoot” and “Black Lives Matter” because they know that every encounter--however mundane--between a black citizen and America’s police could end in unprovoked death and violence.

The Planned Parenthood shooting in Colorado, and how the gunman was subsequently captured alive even after killing a police officer, is more proof of comedian Louis C.K.’s wisdom that there is no better deal than being white, straight and male in America. As he suggests, it is one hell of a deal if you can get it.

The ways in which white people can commit monstrously violent acts and survive, while people of color are killed by the state for far less serious offenses ( if they have committed any “crime” at all), is a ledger of death across the color line.

This balance sheet of death has existed for centuries in the United States. In the post-civil rights era and the Age of Obama, it still shows no signs of equaling out.