At least he's not a Koch Brother: Mark Zuckerberg's plan to give away $45 billion is good news

It would be nice if we didn't have to rely on rich people to save us, but Zuckerberg says he learned from mistakes 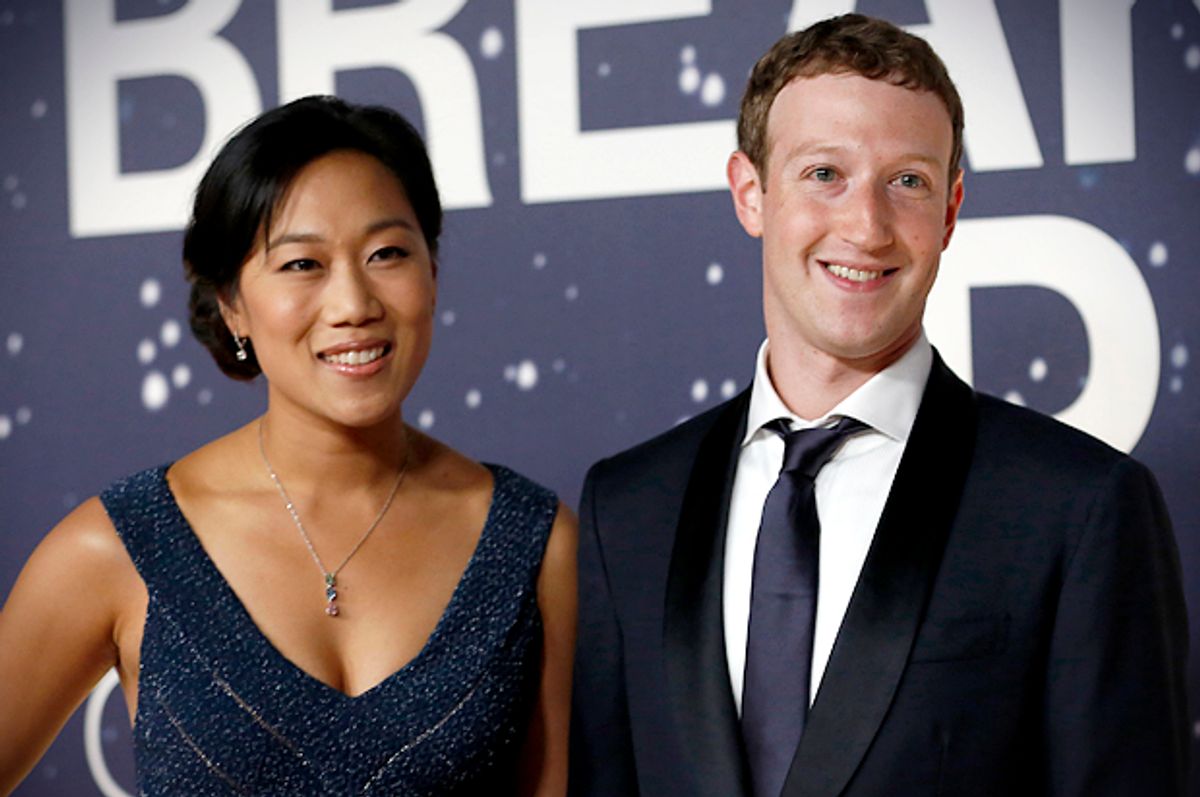 Let’s we get a few things out of the way first, shall we?

Decades of bleeding the government dry with tax cuts and lavish military spending has not exactly left federal or state governments in shape to educate and protect its citizens. We’d be better off with a stronger safety net and less income inequality. Billionaires on a mission can be dangerous, and Silicon Valley is not a gathering of angels. The world would be a better place if we did not rely on rich people to save us.

But even with all this, I’m cautiously optimistic about the news that Mark Zuckerberg and his wife, Dr. Priscilla Chan, will donate 99 percent of their Facebook stock – at this point, that comes to about $45 billion – to charity. In an open letter to their baby daughter, they described their interest in “personalized learning, curing disease, connecting people and building strong communities.”

More on what that means in a minute. But you don’t have to love Zuckerberg or Facebook – I don’t! -- to hope that giving away $45 billion dollars on even vague, utopian sounding goals could be better than sitting on the money.

Zuckerberg, admittedly, doesn’t exactly have a flawless track record when it comes to philanthropy. But part of what makes me hopeful here is the mess he got into in Newark, New Jersey, where he spent $100 million on charter schools and ended up alienating a huge number of people. Zuckerberg came out of it chastened, and if he’s learned anything – he’s said he has – he won’t do anything similarly heavy-handed again.

If the gods are smiling, the Chan-Zuckerberg commitment could drive a philanthropic arms race in which young tech moguls compete to give increasingly large parts of their fortunes away. (Zuckerberg’s interest seems inspired at least in part by the charitable work of Bill and Melinda Gates.) They don’t have to be good people: The philanthropists of the earlier Gilded Age, like Andrew Carnegie, certainly weren’t. But the rest of us are better having some of that money circulating than sitting in family coffers. Are they motivated by inherent virtue or the need to show off? Who knows. But Silicon Valley’s commitment to family leave policies –- where it tends to lead corporate America – are both PR-driven and good for the people who take advantage of them.

What will the Zuckerberg charitable commitment looks like? Here’s the part that makes a lot of observers skeptical. As the New York Times reports:

By using a limited liability company instead of a nonprofit corporation or foundation, the Zuckerberg family will be able to go beyond making philanthropic grants. They will invest in companies, lobby for legislation and seek to influence public policy debates, which nonprofits are restricted from doing under tax laws. A spokeswoman for the family said that any profits from the investments would be plowed back into the Chan Zuckerberg Initiative for future projects.

Clearly, we need to keep our eyes on what happens here, and judging from jaundiced media coverage, there will be plenty of suspicion no matter what the couple does with this money. But their priorities have so far not been cruel or reactionary. The Koch Brothers, for instance, have funded not only unpleasant political candidates but think tanks that deny climate change. The Facebook founder has been a bit misguided at times, as with his charter-school disaster. But he’s not a right-winger or a libertarian kook.

Zuckerberg will probably make some mistakes in how he spends his money. But he seems less of an ideologue and more like someone trying to massage his image as a heartless nebbish, which dates at least as far back as “The Social Network” and has been amplified by the basic creepiness of Facebook.

When it comes to tech moguls, let’s face it: Most of them are a bit odd. Dan Price of Gravity Payments turns out – according to a devastating story in Bloomberg Businessweek –not to be a messiah who decided to raise wages across his company out of the goodness of his heart. Instead, he’s an embattled guy who may have announced the wage hike as a way of deflecting a lawsuit. He also may have physically abused his ex-wife, according to a talk she gave in October. (The TEDx Talk will be public on December 7.)

Compared to oligarchs like the Kochs and to flashy viral sensations like Dan Price, Zuckerberg come out smelling pretty good. Let’s keep our eyes on what this LLC and its lobbying arm amounts to. But let’s pick our battles. This could actually be good.