The AP changed its style after Clinton's campaign dropped her maiden name. Will it up her so-called "likability?" 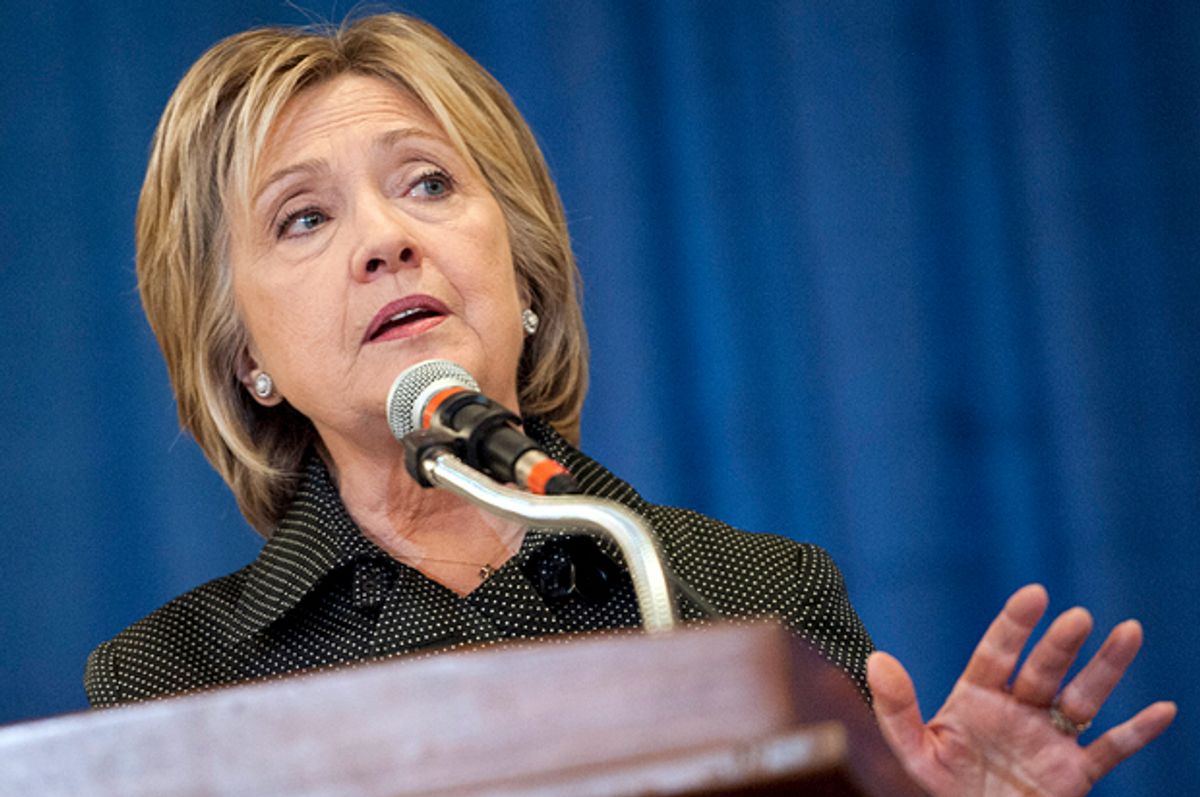 My favorite game as a little girl was dress up. I had a trunk of my mom’s old clothes that I’d use to help me imagine my life as a grown-up with a poker hand’s-worth of careers: a white coat and stethoscope transformed me into “Dr. Coulehan,” aviators and khakis morphed me into “Pilot Coulehan,” and a sharp blazer and skirt combination gave me the sartorial authority to be “President Coulehan.”

I liked imagining myself in these roles, and the titles had nice rings to them. But at a certain point I became interested in boys, marriage, having a family, and grew privy to the tradition of dropping my last name to take on my husband’s, earning the title of “Mrs.” I was never very comfortable with the concept, but would still pair my first name with a boy’s last name to see if it fit. If it sounded right, then maybe it would be OK to marry the boy and change my name. “Erin DiCaprio” always had a nice ring to it.

As an adult, now that the stakes are higher, I realize how important my name is. As a journalist, it’s how I’ve established myself and my work. In many ways, it’s who I am. I still fantasize about marriage, happily ever after, and all that hoopla when I’m mindlessly clicking through Pinterest. It makes me think about the type of partner I want to be. If marriage were to factor in at some point, I’ll have to decide what to do with my name.

It’s a question all women face after marriage. Does dropping our last names strip us of our individual identities after we’ve spent our lives developing them? Is it too old-fashioned to take our man’s name as well as his hand in marriage? What does it matter?

According to Shakespeare, “a rose by any other name would still smell as sweet.” But for women, we’re pricked by thorns of criticism no matter what we decide.

Earlier this week the AP style guide announced that from here on out, Hillary Clinton will be referred to without using “Rodham,” which it had been for years. Throughout the years, her relationship with her name has evolved from maintaining her maiden name to adding her husband’s name after her own, to now officially being referred to as “Clinton.”

“I learned the hard way that some voters in Arkansas were seriously offended by the fact that I kept my maiden name,” wrote Clinton, née Rodham, after her husband lost the governor’s seat in 1980. The AP notes that their style is to refer to public figures as they refer to themselves, however, "the campaign has branded itself from the start as Hillary Clinton. When asked, the campaign says to go with Hillary Clinton. She is filing for ballots as Hillary Clinton and signing her name that way."

Thirty years after Rodham was criticized for not being a Clinton already, people are similarly offended by a woman opting to take her husband’s name. Take Amal Clooney (formerly Alamuddin) — after tying the knot with George Clooney, the lawyer, activist and all-around badass followed tradition and took Clooney’s name as her own, and people were not happy.

It’s an interesting paradox: we admire and trust women like Hillary Clinton and Amal Clooney when it comes to carving out what’s considered to be a modern woman. Powerful, intelligent, capable -- yet chastise them for their decisions about their names, as if that has any effect on their competency. The decision to take a husband’s last name doesn’t really change the person as much as other people's perception of her. This might be why 30 percent of women married within the last year have opted to keep their maiden names.

In 2010, researchers surveyed a group of Dutch subjects on hypothetical cases where a woman changed her last name after marriage and published the results in the journal of Basic and Applied Social Psychology. The study found participants believed women who changed their names after marriage are more “emotional, caring and dependent,” whereas women who kept their names were described as “ambitious” and “smarter” than others.

The terms “emotional” and “caring” are often viewed as pejoratives in our culture, especially when talking about professional women. I’d much rather be referred to as “ambitious” than “emotional,” and think many other women would, too. The problem isn’t that being emotional is a bad thing. We’re human, and guess what? Emoting is part of the human experience, and not something that should be taken away. I fear the day a Margaret Atwood poem doesn’t move me, or a picture of foxes doesn’t cause me to squeal with delight. And yet, Clinton's presidential campaign has been plagued by hand-wringing over whether she is "likable" enough to win the election— it's not her ambition and her intelligence that are being questioned. The problem is that we’ve been conditioned to believe that “emotional/caring” and “ambitious/intelligent” are mutually exclusive. They don’t have to be.

We should respect women -- all women -- for their decisions to keep their last name, adopt their husband’s, figure out a way of hyphenating the two, or dropping the last name all together like Cher.

Descriptors like last names and more general terms like “emotional,” “ambitious,” or any of the other simple words we use to reduce complex women to singular entities shouldn’t matter, but unfortunately carry a lot of weight. The only descriptors that should matter are whether a person -- man or woman -- is happy and fulfilled. We forget that most of a time “what’s in a name” is an actual person.