"We're all refugees": What teaching displaced Syrians taught me about my calling and my country

I'd read The Odyssey many times, but didn't really understand it until I taught it to Syrians who'd lost everything 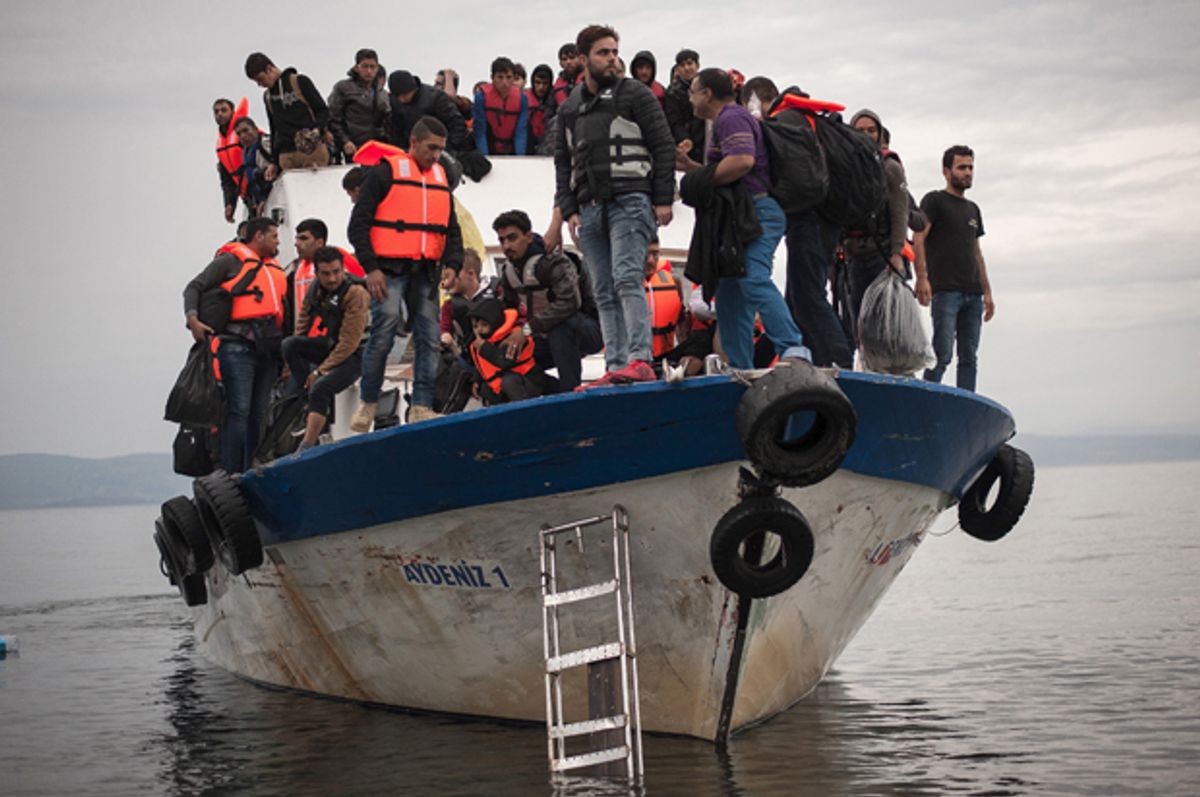 In my first class on "The Odyssey" at the University of Jordan, my students surprised me with readings far darker than any I’d encountered in my classes in the U.S. I have taught this work in translation perhaps a dozen times. In teaching the work, I like to focus on depictions of terrain: lush Ogygia, rocky Ithaka, the perilous wilderness of the wine-dark sea. And still smoldering on the shore behind them, the ruins of Troy. There are nymphs and witches, seduction and intrigues, gruesome violence and angry gods. There is an awkward adolescent becoming a man, a clever hero taking vengeance on his enemies, and a crafty wife thwarting the designs of boorish suitors. There is the joyful reunion of a loving, long-parted couple, and the restoration of order to a troubled oikos. "The Odyssey" is romance and comedy.

But that’s not how my students in Jordan read it at all. Many of them are Syrian, or Iraqi, or Palestinian refugees. In their written responses to the first three books, much of the class wrote some variation of: “We know this story. We know what it is to be unable to go home, to show up with nothing at the door of strangers and hope they greet us with kindness instead of anger. We know what it’s like to wonder about the fate of family members, caught up in wars that seem to go on forever, and to hope that one day we will see them again.”

In its depiction of Odysseus'  journey, "The Odyssey" is a survey of the Ancient Greek practice of xenia—reciprocal hospitality. But for my students, it depicts the exile’s anxiety in a world in which the principle of xenia is threatened, in which the stranger’s welcome is in doubt. Odysseus asks himself many times about the inhabitants of the unknown islands: “Savages are they, strangers to courtesy? Or gentle folk who know and fear the gods?” Today, this set of questions from an ancient work has surfaced again in the political debates in the U.S. and the rest of the world: What is the morally appropriate way to respond to a stranger in need, a person from a distant land who arrives on your shore in need of aid and shelter? What obligations do civilized people owe to the destitute stranger in a world aflame with slaughter and destruction? And how are we to think about those who refuse to acknowledge any such obligations?

Like many residents of Amman, I came to Jordan from elsewhere. But I am no refugee. Instead of Odysseus, I’m more like an aged Telémakhos: unsure of custom, timid about my language, cautious about my actions, fearful of giving offense, but backed by a power that wishes me well (though the Fulbright Commission is perhaps somewhat limited in power compared to Athena). I came to Jordan in search of adventure, wisdom, the opportunity to do my country a service, though I am not a soldier or diplomat. I had grown comfortable in my home state, living on the family farm, teaching at the local university. I wanted a chance to revive and practice my Arabic, which I had studied 10 years ago in an attempt to read the poetry of medieval al-Andalus. I wanted to make friends, meet colleagues and read literature with students in a place that seemed the stable center of a chaotic region. My decision also was, I suppose, part of my ongoing search for perspective on why humanists go on doing what we do: paying close attention to poetry, philosophy, music and art, while others around us do all they can to convince us that such pursuits are pointless frivolities in the face of incontestable economic and political demands.

My neighborhood is known for its large Iraqi population. They own or work in the shops and restaurants. They live in neighboring buildings. My students are Syrian and Palestinian. They speak English, and they smile indulgently at my clumsy attempts to communicate in Fusha— which sounds to them the way a toddler attempting to declaim Spenserian English might sound to us. I do not blend. Where are you from? they ask me. I tell them that I’m from the U.S., from New Orleans. Some of them say: “Jazz!” and their faces light up. Some remember seeing reports about Hurricane Katrina. "Welcome," they always say. "You are welcome here."

It wasn’t long ago—10 years— that my graduate school apartment in Baton Rouge was a refuge for those fleeing my flooded hometown. I am one of those who happily took “refugees” into my home. Family, then friends, then friends of friends, then people I didn’t know. The possibility of refusing never occurred to me. I was volunteering as a first responder at a shelter. I handed my key to my cousin, a Tulane medical student coordinating emergency healthcare in the storm’s aftermath. I said she should make copies if she needed to, and hand them out to anyone who needed a floor to sleep on and a roof to sleep under. She did. They, too, were welcome. I know and love the ruined city they were fleeing. It was my city once, laid waste by what might have been ascribed 2,800 years ago to Poseidon’s rage. And I remember the stories told at the time about how dangerous—or lazy—or thieving—Katrina refugees were supposed to be—stories that seemed to me then and now as invented as any ancient tale or fable.

Now I live, work and teach among people whose lives have been disrupted—and sometimes all but destroyed—in part by policies my country has adopted in pursuit of its interests. Whether that cause was just or wise or necessary for reasons of state is of secondary concern to people who have had to separate from family, or flee their home, possibly never to return. As policy debates rage and rhetoric flies, it’s easy to forget that for millions of people, statelessness, persecution and displacement are not abstract. They are not issues of political discourse but of life, death, love, family and immeasurable personal loss.

For many of my students, "The Odyssey" is not just a story because Troy still burns on the shore behind them, and home is far away. These are people who have fled the threat of actual daily violence—not in some far-off land, but in the place where they live. They could justifiably hold me at least partially responsible for what has happened to them. I have a vote. I am a citizen. Thanks to my profession, I have a voice. I have some (theoretical and minuscule) effect on my nation's policies abroad. Yet, never have any of them treated me as if their misfortune were my fault, or as if I might be an agent of further violence and destruction. Never have any of them made me feel anything other than warmly welcomed. In that sense, my students grasped the principles of xenia quickly. They are simple: when strangers arrive at the door, the host is to offer them food and drink, and perhaps a wash, before even asking who they are. Only after their needs are met may the host ask questions. In turn, the guest is to behave respectfully, show appreciation and not make demands that cannot be met. These rules, my students said, are a lot like the rules their grandparents follow about guests. The Odyssey presents an array of examples of the treatment of strangers. There is windy Nestor, humble Eumaios, graceful Nausikaa, and anthropophagous Polyphêmos. The expansive (if slightly tacky) Menelaus gives a retainer a tongue-lashing for being too slow to offer hospitality to Telémakhos and his companions. In "The Odyssey," generous hospitality marks the greatness of a ruler.

I remember this when I read the news out of my home country, when I read about how the fear of strangers seeking refuge has come to dominate political discourse. In my home state of Louisiana, both the Democratic and the Republican candidate for governor engaged in a contest to show who feared refugees more. The House of Representatives has passed a bill making refugee status for Syrians all but impossible in practice. Refugees like Odysseus, perhaps, are whom they fear. When Odysseus washes up on foreign shores, he is a dangerous man of military age: a schemer, a steely, wily, proven warrior with a bloodbath behind him and the destruction of a great city at least partially to his credit.

The refugees I have taught could not be more different. My students—overwhelmingly women—are subtle and sharp in their insight and reasoning, polite and enthusiastic. They are elegant in stylish hijab, or rebellious in Nirvana or Ramones T-shirts and jeans.

So I can understand why so many of them took special note of Odysseus’ plea to the Phaiákian queen Arêtê in Book VII: “[g]rant me passage to my father land. My home and friends are far. My life is pain.” For many of them the ruins of Troy are still smoldering behind them, their oikos in utter disarray with little hope of putting it right. And now the hope of safe haven vanishes too. There may be no solace for them across the wine-dark sea, which continues to claim victims in many of the same places it did in Homer’s time.

This conversation continued after each class. One afternoon, a discussion with one of my Syrian students led to stories about the home her family fled.

She said, “Yes, I would love to go home,” then added, “Insha’allah.” If God wills—a ubiquitous Arabic expression of doubt and hope, a reminder in this region that many people believe their life and fortune to be subject to the will of the divine.

In that promised welcome to a home she had lost, I heard an echo of our shared experience.

Reading one of the world’s oldest refugee tales with a class full of refugees afforded me one of the great rewards of studying literature: the chance to be astonished, to see a blaze of new light shed on an old story, to be moved by a glimpse into another’s vision and experience of the world.  I will never again read "The Odyssey" without thinking of my students in Jordan and their longing for home—or at least refuge—in a dangerous world. Our lives and lots could not be more different, and yet, strangely, I feel as though our fates are intertwined.

Richmond M. Eustis, Jr. is a visiting Fulbright Scholar in the Department of English at the University of Jordan. He is an assistant professor of English at Nicholls State University, and a field instructor for the National Outdoor Leadership School.