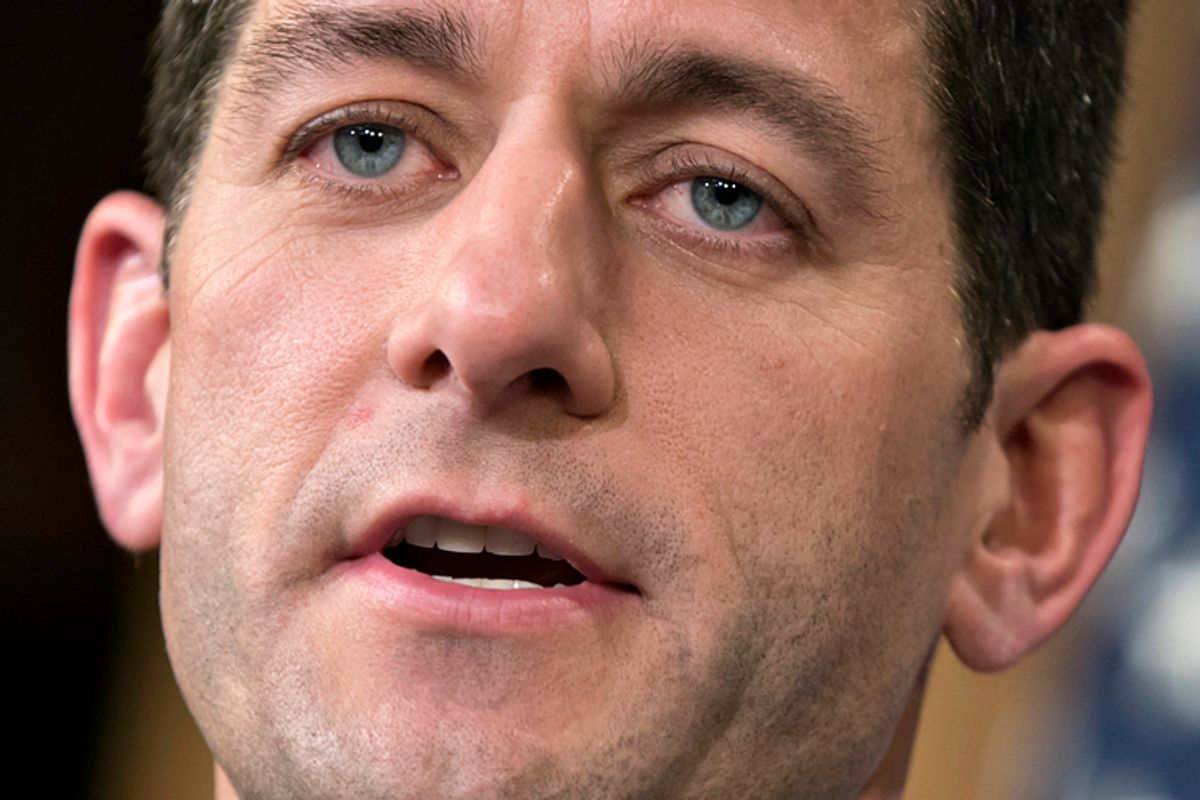 On the 50th anniversary of the war on poverty, Republicans are whipping out "compassionate conservatism" again, in an attempt to rebrand themselves as something other than the harsh, anti-poor, anti-women, anti-minority, anti-gay, anti-everything wingnuts they have been showing us they are. It's a strategy Republicans default to when they've taken things to such an extreme that the country is revolted. And here we are with Republicans pretending to have proposals geared toward fighting poverty instead of just boosting the fortunes of those who already have huge fortunes.

Republicans say that assistance to the poor makes people “dependent,” or as Paul Ryan put it in what has become known as the “Hammock Theory,” welfare is “a hammock that lulls able-bodied people to lives of dependency and complacency.” These are the same people who say that helping the unemployed causes unemployment, and cutting taxes increases tax revenue, so you have to take this with more than a grain of salt. Let’s take a look at some of the various Republican proposals allegedly meant to help the poor and fight poverty.

Florida’s Republican Senator Marco Rubio recently  gave what was billed as a major speech on poverty,  saying the poverty-fighting approach of Democrats is “stale and old and doesn’t really address the magnitude of the problem.” Here are a few of his proposals.

2. Give subsidies to employers instead: Instead of raising the minimum wage (higher wages mean less money going into the pockets of those at the top of the corporate ladder) Rubio proposes to replace the Earned Income Tax Credit with a direct wage subsidy. He would give government money to companies to “supplement wages.” He says this would “encourage and reward work.” This would mean the money companies are not paying out in higher wages would continue to go to the top few and government would make up the difference: a direct government subsidy of inequality.

3. Turn programs over to states: Rubio proposed turning federal anti-poverty programs over to the states in a single “flex-fund” block grant, in order to let the states decide what to do with the money. Note that  24 states are currently refusing the federal Medicaid expansion, leaving 5.4 million people without health coverage even though it comes at no cost to those states. So the record on turning things over to the states as a way to help the poor is not good.

4. Marriage: Rubio’s  big proposal is marriage (but not gay marriage). He said, “the greatest tool to lift children and families from poverty is one that decreases the probability of child poverty by 82 percent. But it isn’t a government spending program. It’s called marriage.” Rubio says that government subsidies to increase wages (instead of just raising the minimum wage) makes men more “marriageable.” He also said we need to “remove the marriage penalties in safety net programs.” This is typical Republican dog-whistle politics, used to evoke images of “welfare mothers” – single black mothers having lots of babies so they can get more welfare.

Along these same lines Rep. Louie Gohmert (R-TX)  recently said the reason he ran for Congress was “because he was outraged that single women were having as many as 15 babies and getting welfare checks.” Perhaps his proposal to stop all the women who have 15 babies (if there are any) from getting welfare checks will fight poverty, perhaps not. It should be noted, however, that “welfare” largely ended in 1996. Even with this program the amount given for nutritional assistance for children is extremely low, while the “reform” of this assistance has left millions in desperate straits. A 1997 Rutgers study compared birth rates between women receiving welfare who were receiving these benefits and a control group of women on welfare who were not found identical birth rates.

5. Make them move: Rubio also proposed giving unemployed people “relocation vouchers” so they can move to places with low unemployment.  Erika Eichelberger at Mother Jones talked to Mike Konczal of the Roosevelt Institute, who pointed out that this idea would just move the problem around. "States with low unemployment are often small states that are heavily agricultural," he says. "There is not a lot of dynamic turnover… There are already unemployed people there who want those jobs" that are open.

Republicans have thrown a few other anti-poverty proposals into the mix recently.

6. Volunteer: Paul Ryan, chief cutter of budgets for things government does to make our lives better, is trying to distance himself from Republican (and his own) branding as insensitive to the poor. According to the Washington Post, “His idea of a war on poverty so far relies heavily on promoting volunteerism and encouraging work." This is not the “volunteerism” of his famous photo pretending to wash dishes at a soup kitchen during the 2012 campaign; this is people showing up at soup kitchens, etc., and working without pay. While all of us should be helping out at soup kitchens, shelters and other programs that help others, it's no substitute for the kind of resources government would be able to apply if Ryan was not so effective at gutting the government.

7. Get rid of public schools: Representative Eric Cantor of Virginia, the House majority (Republican) leader  says that education reform broadly, and “school choice” in particular, is the surest way to break the "vicious cycle of poverty.” It is not clear how getting rid of public schools and using tax dollars to fund private schools-for-profit will fight poverty. The Education Opportunity Network explains that “education reform… seeks to impose on schools a governing methodology favored by business executives and policy technocrats” and in another post, that “access to good public schools is a critical civil and human right… corporate reform is characterized as a “market-based system” emphasizing “competition—as opposed to collaboration” that imposes a “system of winners and losers” in which “vulnerable children become collateral damage.”

8. Get rid of child labor laws: Maine’s Republican Governor Paul LePage  says child labor laws “are causing damage to our economy.” “We don’t allow children to work until they’re 16, but two years later, when they’re 18, they can go to war and fight for us,” LePage said. “That’s causing damage to our economy. I started working far earlier than that, and it didn’t hurt me at all. There is nothing wrong with being a paperboy at 12 years old, or at a store sorting bottles at 12 years old.”

The Real War On Poverty Had Real Results

In 1967, as the war on poverty war got underway, the official poverty rate was 26%; by the end of LBJ’s time in office it had fallen to 12%. But funding was siphoned off first by the Vietnam War and then gutted by Republicans. The number of Americans with incomes below the poverty line has grown back as high to 29 percent in post-recession, forced-austerity 2012.

Even so, the programs have done a great deal to improve the living standards of poor people. Amajor study done at Columbia University and released in December found that when you add in the effect of the programs on the lives of impoverished people the poverty rate is 16% today, even after the terrible effects of the financial crisis. Using the measure in the Columbia study,  Michael Hiltzik points out in the LA Times, “poverty-fighting tax breaks and other transfers, the poverty rate would be close to 30% today.”

So while incomes haven’t gone up, the effective poverty rate is about half what it was at the start of the war on poverty. As Dylan Matthews put it in the Washington Post, “Government action is literally the only reason we have less poverty in 2012 than we did in 1967.”

Here are a few facts about the war on poverty from the AFL-CIO Now blog:

Former Labor Secretary Robert Reich  suggests that all of this Republican talk is really just a divide-and-conquer strategy that is starting to backfire on them as more and more working people fall behind. Reich writes,

For almost forty years Republicans have pursued a divide-and-conquer strategy intended to convince working-class whites that the poor were their enemies.

[…]But the divide-and-conquer strategy is no longer convincing because the dividing line between poor and middle class has all but disappeared. “They” are fast becoming “us.”

The war on poverty has had success, especially when it can get around Republican efforts to obstruct, gut or just kill off the programs. Our country could take this a small step further with an all-out effort to raise the minimum wage to the level of a real living wage, restore full employment so working people have the power to demand better wages and benefits, increase education opportunities for all Americans and make it easy to organize workplaces so more people could enjoy the benefits of having a union.