The economist has a liberal answer to Maher's thorny questions: A leftist fight on terror tackles inequality 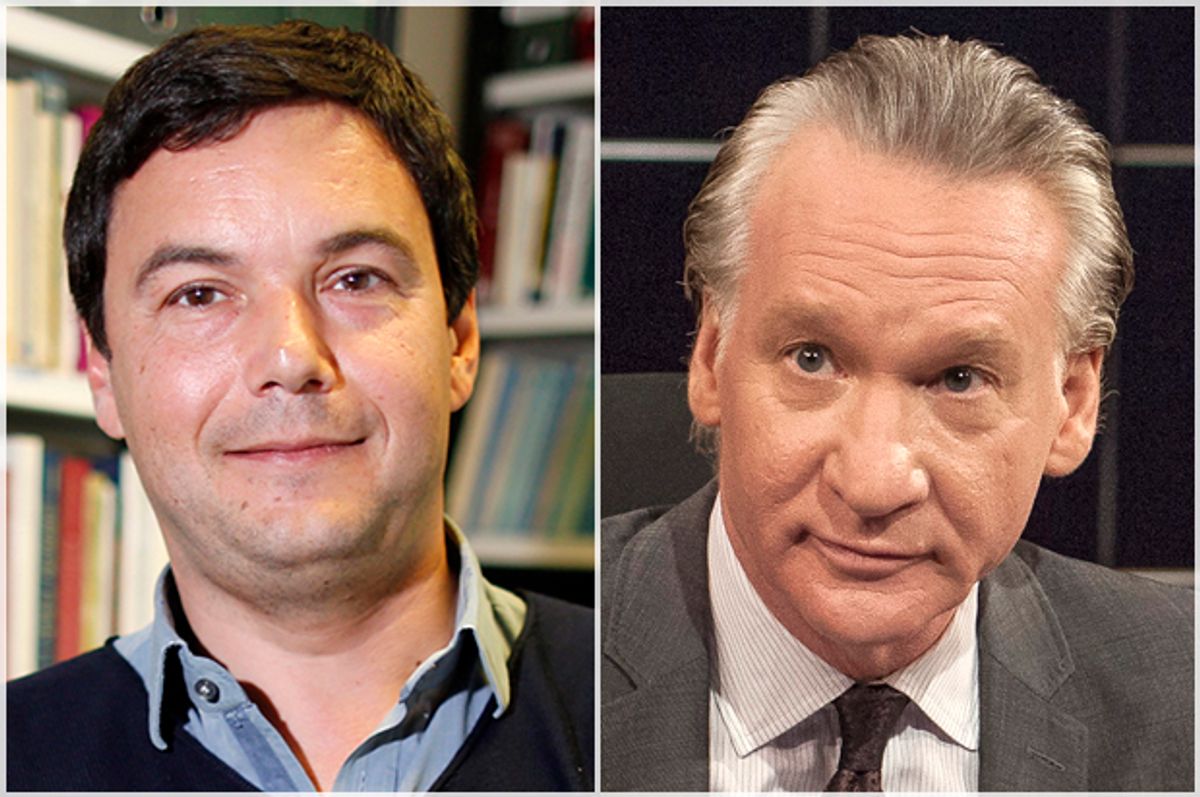 Thomas Piketty, the French economist who made headlines last year when he published “Capital in the Twenty-First Century,” has penned a brief but controversial essay (for the French newspaper Le Monde) on the origins of ISIS and Middle Eastern terrorism. Piketty’s 700-page opus was a broad study of inequality in the West since the 18th century.  His thesis was that political instability followed inevitably from the unequal distribution of wealth in various American and European countries, and that these inequalities were natural byproducts of neoliberal capitalism.

Unsurprisingly, Piketty brings his economic perspective to his analysis of the Middle East. On his view, terrorism springs from massive wealth inequalities in the region, inequalities that Western nations helped engineer. Indeed, Piketty believes inequality, and the corruption and disorder associated with it, is the major driver of Islamic extremism.

Piketty writes: “It is obvious that terrorism feeds on the Middle Eastern powder keg of inequality, which we have largely helped create. Daech, ‘Islamic State in Iraq and the Levant,’ arises directly from the decomposition of the Iraqi regime, and more generally from the established borders in the region since 1920.” These borders were defined by the West after WWI, and so the West is partly to blame for the combustible climate that resulted from them.

“After the annexation of Kuwait by Iraq in 1990-1991, the allied powers had sent their troops to return the oil to the emirs – and to Western companies. This inaugurated a new cycle of technological and symmetrical wars – some hundreds of deaths in the coalition to ‘liberate’ Kuwait against the tens of thousands on the Iraqi side. This logic has been pushed to the limit during the second Iraq war between 2003 and 2011: about 500,000 dead Iraqis for more than 4,000 U.S. soldiers killed, all to avenge the 3,000 deaths on September 11, which had nothing to do with Iraq. This reality, amplified by the extreme asymmetry of casualties and the lack of political settlement in the Israeli-Palestinian conflict, is now used to justify all the abuses by Jihadists.”

Piketty’s observations here are mostly banal. What’s interesting, however, is his emphasis on the long-term social and economic consequences of our misadventures in the region. If you buy his argument that wealth inequality breeds political unrest (and it’s very hard not to), then you must also concede that much of the chaos in the region stems from the obscene concentration of capital and resources. (The Middle East, as Piketty notes, is “the most unequal region on the planet.”) And to the extent that Western nations have facilitated this inequality, they are responsible for the mess that followed.

The numbers are alarming.

These countries are wealthy precisely because they are oil monarchies, and they are aided in every way by the Western nations who depend on them for vital resources. And even in the monarchies, a minority of people benefit from this windfall “while large groups (including women and migrant workers) are kept in semi-slavery.” “These regimes,” Piketty adds, “are militarily and politically supported by the Western powers, who are too happy to get some crumbs to fund their football clubs, or to sell some weapons. No wonder our lessons in democracy and social justice find little welcome among Middle Eastern youth.”

There is a lot of truth in Piketty’s analysis. But Islamic extremism is, above all, an ideological problem. Jihadists have clear scriptural justifications for their actions, and in that sense you can't divorce Islam from organizations like ISIS and Boko Haram. Piketty's point, however, is that groups like ISIS succeed, in part, because they’re able to peddle a plausible narrative about the West and its hostility to Islam and the Middle East – some of these grievances are exaggerated, but many of them are legitimate. The fact that Western nations have propped up corrupt regimes and helped to destabilize the region is not lost on the majority of the populace.

I’ve argued previously that the left is making a mistake when it ignores the explicitly religious justifications for terrorism, but it’s also a mistake to discount the political and economic roots of this problem. Plenty of well-educated, middle-class people have exploded themselves in defense of their faith, and in these cases religion is perhaps the most significant variable – there’s no point in denying that.

But there’s no question that the extremist narratives would be far less appealing if our history in the region was otherwise, if there were more political integration and social development. Interventionism, economic deprivation, totalitarian regimes (supported by the West), permanent unemployment, institutional corruption – all of these factors make extremism a more reasonable alternative to people without options.

Western nations, for economic and strategic reasons, have spent more time creating these problems than solving them – that has to change. The West isn’t responsible for every failure in the Middle East, but there’s no solution to this problem that doesn’t involve improving the political and economic conditions in the region.

There are limits to what outside countries can do, and we have to be honest about that. Ultimately, the Middle East will have to solve its own problems. But the prevailing economic model in the region isn’t sustainable, and that model exists, in part, because the West created it and because corporate interests continue to benefit from it.

Acknowledging this is a step in the right direction. A less corrupt and more equitable Middle East would be less hospitable to groups like ISIS and al-Qaeda, which cannot exist without power vacuums and failed states. Reducing inequalities isn’t a panacea for the terror problem, as Piketty seems to imply, but it would eliminate one of the key antecedent causes.