Donald Trump & Alex Jones: A match made in wing-nut hell 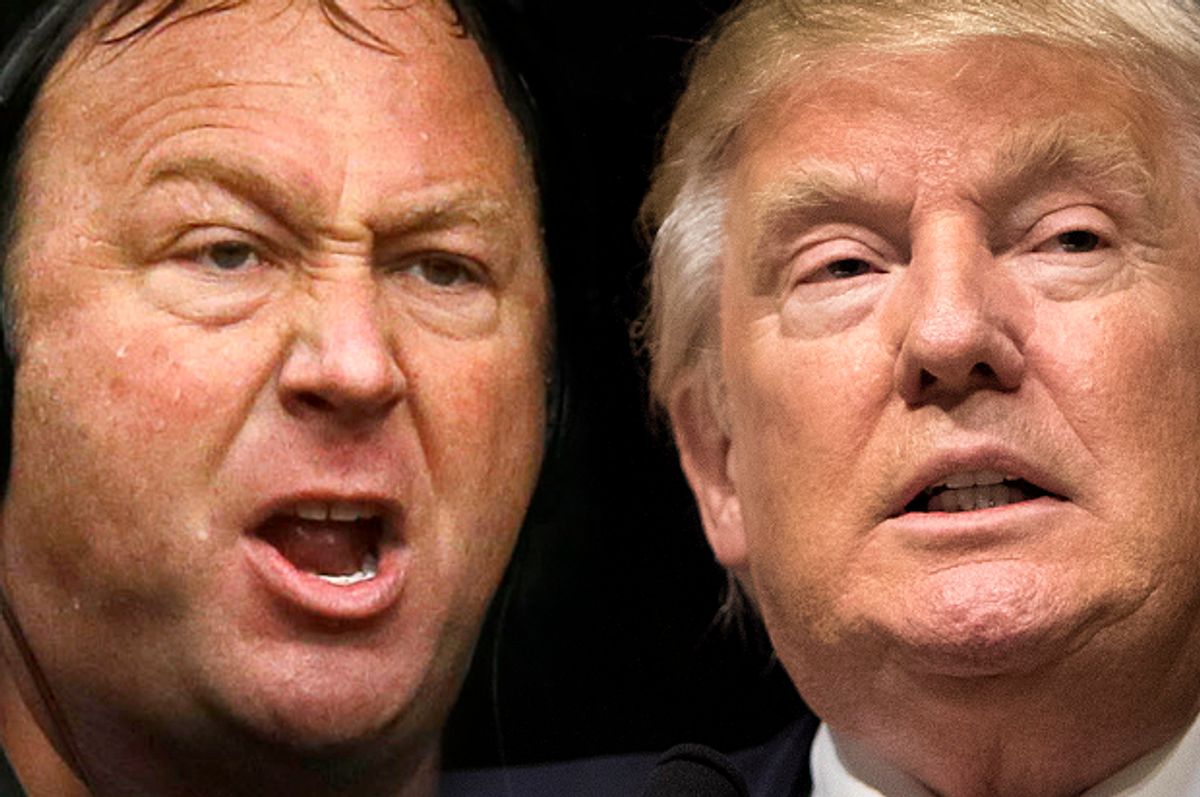 If one thing is clear from the first several months of the GOP primary, it's that Donald Trump can do just about anything and not take a hit in the polls. But he tested the limits of that rule on Wednesday when he appeared on conspiracy theorist Alex Jones' radio show.

For those of you just joining us, Alex Jones' InfoWars universe is ground zero for every loony conspiracy in circulation these days -- from chemtrails and gay juice boxes to this past summer's thoroughly ludicrous Jade Helm 15 uproar. And that's before we mention the lizard people. More politically toxic than any of those fringe beliefs, however, is his insistence that the Boston bombing was a false-flag operation and the Sandy Hook massacre never happened at all.

Throughout the interview, Jones could barely contain his enthusiasm for Trump. But considering his resume, it's not quite clear why Trump would ever want such an endorsement. Yet there he was -- perhaps because , when push comes to shove, he himself is nothing more than a wealthier and more popular version of Alex Jones. They're both sideshow barkers, suckering gullible people into accepting make-believe stories.

Trump, for his part, is never shy about dealing in wacky conspiracy theories, going so far as to dispatch investigators to Hawaii back in 2011 in order to discover whether President Obama was really born there. Trump has also been standing by his debunked claim that literally thousands of Muslim-Americans in New Jersey were celebrating the 9/11 attacks, a theory Trump hastened to defend at the outset of his appearance with Alex Jones, even though it's been thoroughly debunked by both independent fact-checkers and law enforcement in New Jersey. During the segment, Jones said Trump's false claims about 9/11 celebrations have been "vindicated."

The Donald also repeated his idea that mosques and Muslim-Americans need to be surveilled, and Jones that radical Islam and the influx of Syrian refugees is the biggest issue facing the United States today. In fact, Jones went so far as to praise Trump for being a "modern day George Washington." (That thumping sound you hear outside your window is George Washington spinning in his grave.)

It's worth noting here that Jones doesn't even believe the 9/11 attacks were perpetrated by terrorists. For 14 years now, Jones has been telling his listeners that the towers were brought down by the government in a stupendous false-flag operation designed as a pretext for the wars in Iraq and Afghanistan.

None of this is at all surprising. This is where the modern Republican Party has been headed for some time now -- slowly converging with far-right conspiracy theorists, as well as nullificationists and right-wing extremists, to create a party which Barry Goldwater or Ronald Reagan would hardly recognize. Trump represents the first serious presidential contender to wrap his puffy arms around Jones and his hypertensive gaggle of weirdos. It represents a massive shift in the GOP toward the paranoid fringe and away from the mainstream. While there's always been a libertarian strain inside the GOP, featuring a basic distrust of government, Trump has blown right on by the libertarian right and gone further, embracing the fringiest of the fringe.

At one point, Trump assured Jones,

"You’ll be very, very impressed, I hope, and I think we’ll be speaking a lot, but you’ll be looking at me in a year, or two years—give me a little bit of time to run things—but a year into office, you’ll be saying, ‘Wow, I remember that interview, he said he was gonna do it, and he did a great job.’"

Any actions that will impress Alex Jones will be, in a word, crazy, and whether you're a Republican, Democrat or independent, Trump's association with this known flimflam artist should, again, in a sane world, disqualify him from ever getting within 100 miles of the Oval Office.