50 students are occupying UC Berkeley chancellor's office, in what they say is the largest sit-in since the 1970s 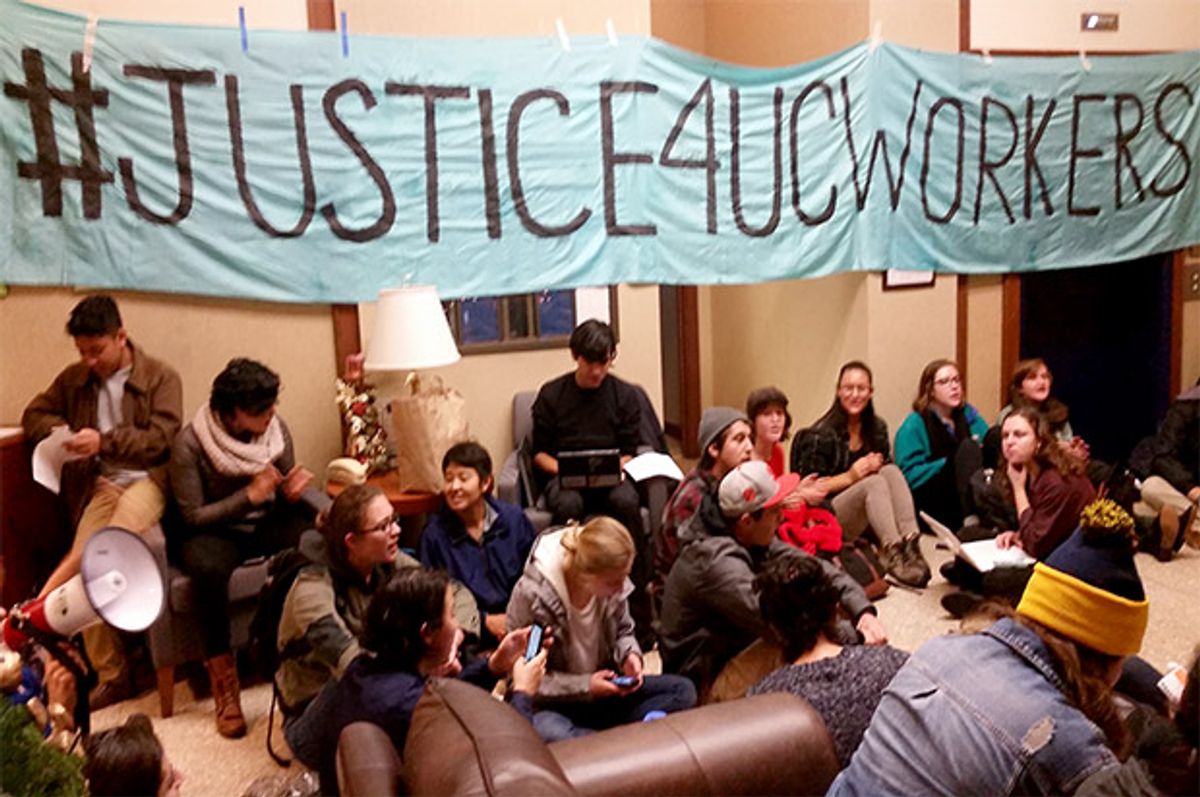 (Update: 22 students were arrested at the sit-in. See the update below.)

More than 50 students are staging a sit-in in the office of University of California, Berkeley Chancellor Nicholas Dirks. The protest, which was organized by the school's Student Labor Committee (SLC), is calling for an end to university labor outsourcing and exploitation.

One of these contractors, Performance First, is under federal investigation by the Department of Labor for alleged rights violations. In a report by the Los Angeles Times, subcontracted UC Berkeley workers said that, during sports events, they sometimes work 80- or 90-hour weeks and are denied overtime pay.

A custodian who was employed by Performance First told the LA Times she worked 16-hour days, seven days a week to prepare for and clean up after UC Berkeley's Golden Bears football games. She said she never received more than $10 an hour, in contravention of California's labor laws.

The Department of Labor is still looking into the workers' allegations.

UC Berkeley's subcontracted workers, who are overwhelmingly people of color, are paid less than their directly UC-employed counterparts, and frequently do not have access to health benefits, retirement plans, or job security.

The university's "hiring decisions ruthlessly exploit marginalized Bay Area workers in order to cut costs, while administrative salaries continue to expand at an astronomical rate," the SLC said in a statement.

"As students, our unique ability to hold administrators accountable comes with a responsibility to do so. We cannot and will not languish idly by while a self-proclaimed bastion of public values exploits the people who make it function on a daily basis," Student Labor Committee organizer Kristian Kim told Salon.

The students also noted that the outsourcing of campus workers is undermining unions. Activists said workers in AFSCME Local 3299, UC's largest employee union, "are being squeezed out of living-wage jobs in favor of exploited contract workers."

The University of California system is the state's third-largest employer.

In August, workers employed by subcontracted companies at UC Berkeley and labor activists went public with their demand to be insourced by the university. Student protesters decided to stage a sit-in to continue pressuring the university.

The protesters told Salon this is the largest occupation of California Hall, the chancellor's office building, since Berkeley's student movement of the 1970s.

The students spoke of their protest as part of a larger struggle against university privatization throughout the U.S. "Outsourcing is one mechanism of the privatization we see rapidly spreading across public universities," Kristian Kim noted.

The privatization of public universities, and the corporatization of higher education overall in the U.S., has become an increasingly important issue around which student activists throughout the country have mobilized.

"I think it's important for all UC workers and students to stand together against administrators intent on privatizing and corporatizing our university," said David McCleary, a PhD student who serves as northern vice president of UAW Local 2865, the UC system student workers union, which represents over 14,000 employees. UAW 2865 did not organize the sit-in, but members joined the SLC in its action.

McCleary and other student activists accused UC Berkeley Chancellor Dirks of hypocrisy for condemning racist exploitation in his scholarship, but overseeing what they say are unfair labor practices that disproportionately impact workers of color. Dr. Dirks is a South Asian historian and former Columbia University professor who specializes in postcolonialism and has written extensively about British imperialism in the Indian subcontinent.

"A broad coalition of students demands that their tuition dollars no longer fund racism and injustice at the UC. And they will continue to campaign with increasing intensity until UC Berkeley's hiring practices adhere to the values embodied (and advertised) by an elite, progressive university," the SLC said in a statement.

"These workers are necessary for the daily functioning of the school, and deserve the respect afforded to all other actors on this campus," the SLC added. "Tactics of exploitation and retaliation corrupt and degrade the mission of the entire University of California system."

After this article was published, 22 student protesters at the sit-in were arrested, cited and released on charges of trespassing and unlawful assembly. They are due in court in January.