After another mass shooting claimed 14 lives yesterday, a look at the political landscape yields some scary insight 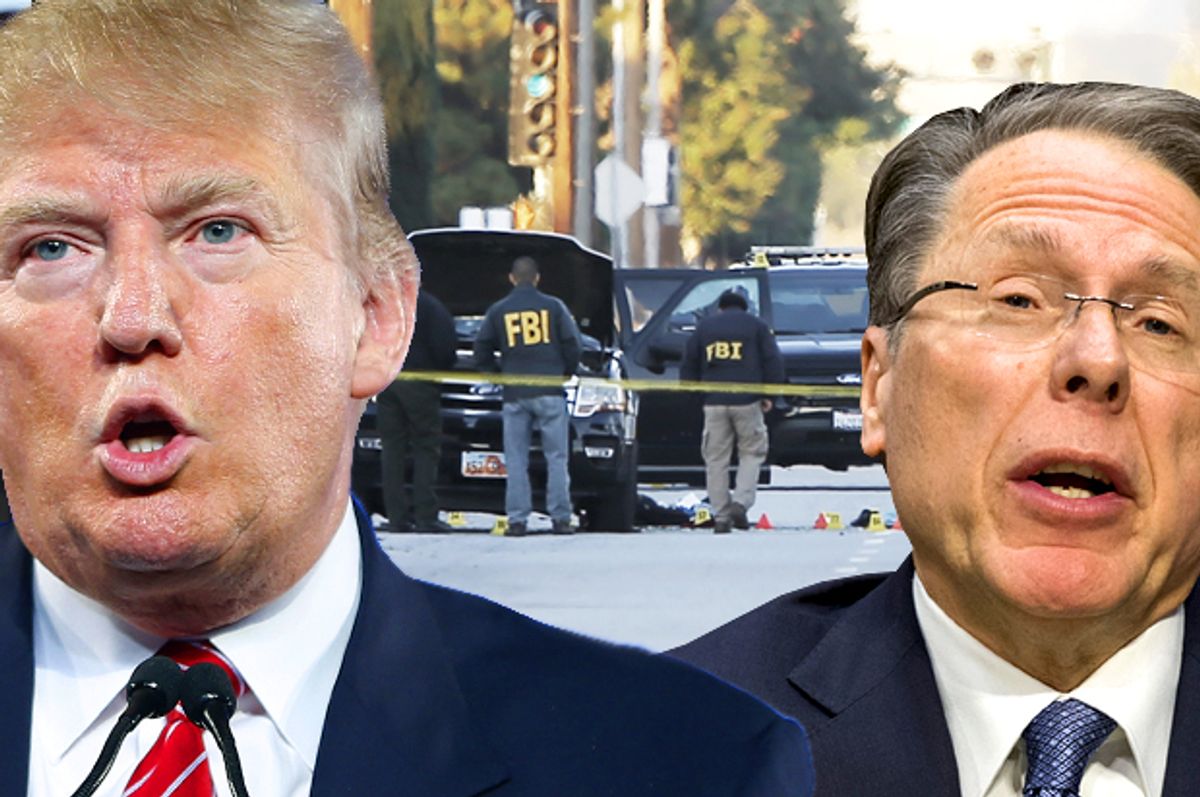 For the second time in two months, I’m trying to write a column in the middle of an ongoing mass shooting on the West Coast. And once again I find myself filled with that mix of loathing, despair, and angry sarcasm that I haven’t felt since…oh, last Friday, when Robert Dear shot up that Planned Parenthood clinic in Colorado.

This can’t be healthy, for anyone.

Ironically, I had planned on writing about the news that Black Friday saw a record number of background checks performed for gun purchases. People love to give each other guns for Christmas, because nothing says “spirit of the season” like a Glock with a 15-round magazine. If Jesus had been strapped, those Romans probably never would have messed with him. Talk about not defending yourself against government tyranny! Apparently God gave everyone the natural right to self-defense except His only son.

So the FBI’s instant background check system performed 185,345 checks last Friday, about two every second, even while the bodies were falling in Colorado Springs. And that’s just one day of the silly shopping season, which comes in a year that has seen a steady increase in gun sales. Part of this boom (no pun intended) surely comes from Second Amendment enthusiasts who are paranoid that Obama is going to come steal their guns any minute, as they have promised he is about to do for seven years. But one wonders how much of it is driven by people who have not had more than a passing interest in guns before, who now find themselves in a country full of armed lunatics. A country where a quick trip to the grocery store or a Friday-night movie could be interrupted by an angry man with a grudge and a couple of semi-automatics with high-capacity magazines.

In short, how much of this surge in gun sales comes from people who are not rabid Wayne LaPierre groupies, but see a society falling victim to his poisonous rhetoric and think they may as well buy a gun, just in case? Can’t say I blame them. Even if your chances of falling victim to gun violence are still very low, the breathless media coverage of each mass shooting and the polls on what your fellow Americans want with regard to gun control laws must make arming yourself feel like a rational response.

Of course there is nothing rational about our fear or our country’s fixation with guns. Which is how you get to the absurdity this week of a national police union calling for the NFL to rescind its ban on guns in stadiums so that retired and off-duty officers can bring their sidearms to games in case of a terrorist attack. Because an environment with lots of drinking and regular fighting is a great place to bring a gun.

There is nothing rational about the absolutism over our Second Amendment shown by Republicans (and some Democrats), which is how you get the absurdity of the GOP’s leading presidential candidate appearing Wednesday on the radio show of Alex Jones, a paranoid gun lover who thinks that the shooting at Sandy Hook Elementary in 2012, which killed 20 kids and six adults, was a false flag operation staged by the government to give itself an excuse to seize citizens’ guns. A guy who believes in dark conspiracies of globalists who want to send in U.N. shock troops to disarm Americans and indoctrinate them into socialism, or something.

There was a time when a guy like Jones would have been confined to broadcasting his craziness on a shortwave radio from a trailer in the Mojave. Today he gets to interview the man leading the Republican primary field by 20 points.

Not that Trump’s competitors are any better. All of them tweeted out their “thoughts and prayers” to the victims of Wednesday’s shooting, without giving even the tiniest nod to the possibility that they might, if elected, consider whether there is any action they can take to mitigate the effects of gun violence in this country.

Or they could level with the public and explain exactly why there is nothing they can do, why 30,000 deaths a year and almost-daily scenes like we saw in San Bernardino is just the price we have to pay in order to maintain some abstract notion of freedom. It would be a load of bullshit, but at least it might indicate they haven’t had the last vestiges of their humanity focus-grouped out of them by campaign consultants hovering over every Frank Luntz focus group of Republican voters like blow-dried ghouls.

One day we’re going to have to take a hard look at the emotional, physical, and financial costs to our society of living with this constant anger and violence. At least I have to hope we will. After another exhausting day of watching the police peeling 14 more bullet-riddled bodies off the ground, that’s all that I have left.