The New York Post has no shame: The ugly truth about its outrageous "Muslim Killers" cover

Should we be surprised that the Post would be so explicit in its Islamophobia? No. That's what's so disturbing 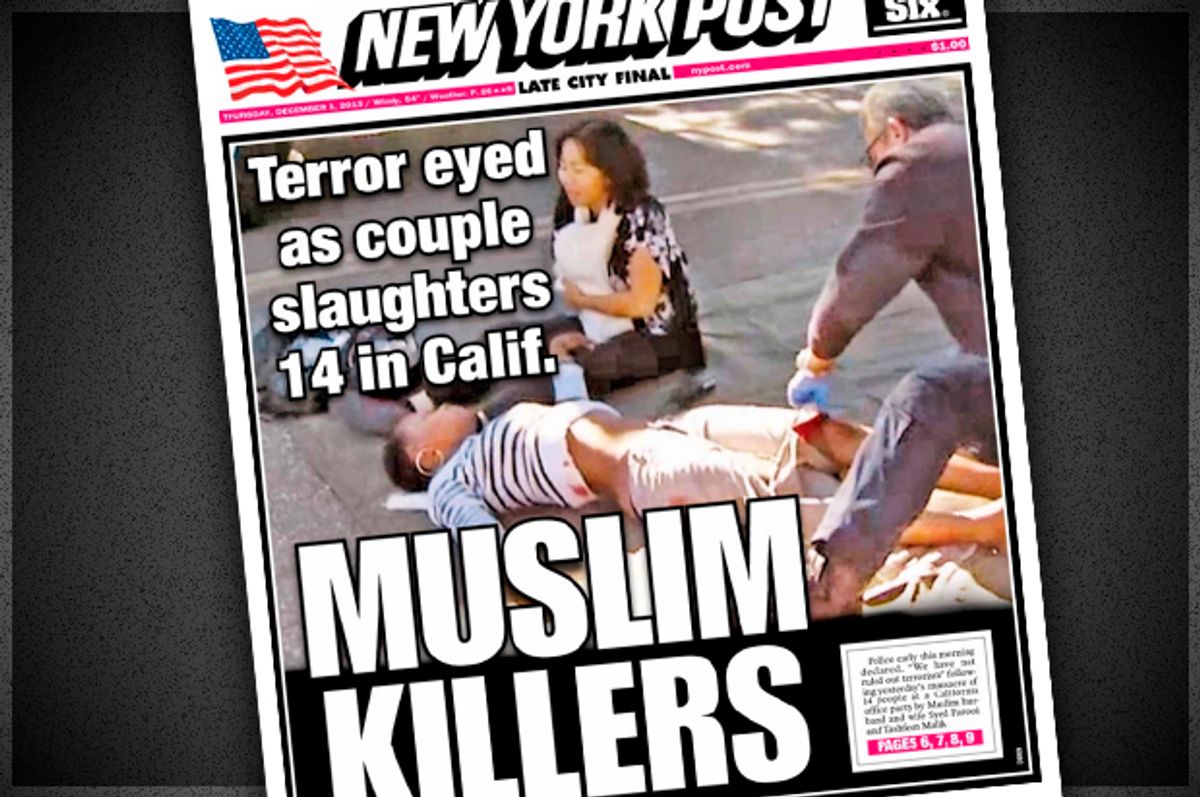 Sometimes the mask slips, doesn't it? Sometimes the subtext is made text. The morning after a husband and wife allegedly murdered 14 people in San Bernardino, the New York Post decided to plainly and unabashedly articulate the racist framework through which we view crime in America. It turned out that the husband and wife were named Syed Rizwan Farook and Tashfeen Malik, so the Post said what so many bigots were surely thinking: The most important thing about these two was not that they had just massacred more than a dozen innocent people, but that they were Muslim. To lift from Martin Luther King, the color of their skin was more significant than the content of their character. It would be difficult to find a more blatant example of racism.

Imagine if the headline had said "JEWISH KILLERS." Actually, you can't imagine that, because the Post would never, for a second, think of writing a headline like that. You can't smear Jews like that. Muslims, though? That's a different story.

There are actually two versions of the Post's front page that went out. An earlier edition, posted on the Newseum's daily roundup of front pages, is quite different. "MURDER MISSION" is the headline. Then, the Post decided, with evident glee, to go all in on Islamophobia.

The Post is published in New York City, where anywhere between 600,000 and 1 million Muslims live. It seems safe to say that the Post didn't think about what it meant for them to have such a headline plastered on newsstands and in bodegas across the city, or what it meant for the hundreds of thousands of Muslim children attending New York's public schools to be tarred in such a way. The casualness with which the paper deploys this particular form of hatred is beyond contemptible—though not especially surprising, given that this is the same outlet which was forced to reach a settlement with the innocent Muslims it libeled as the men behind the Boston bombing.

Of course, you can only cast so much blame at the Post itself. It is merely reflecting the feverish Islamophobia that is coursing through the veins of our politics at the moment. The front page makes sense if you imagine that all Muslims are a fifth column in the United States, which many clearly do. If you think that Muslims could not acclimate themselves to America's culture of rampant, constant gun violence without also being ISIS in disguise, then you will look at the Post's coverage and nod your head in understanding.

The headline also only works if you think that worrying about the disturbing frequency of mass shootings isn't itself worthy of commentary. There is a palpable relief in the Post's sudden change of course between editions. This doesn't have to be about guns anymore. It can be about Scary Muslims coming to kill all decent people. The idea that the prevalence of so much gun violence is not an urgent national security matter on par with the threat of ISIS is ludicrous when you think about it, especially given that ISIS must be green with envy at the ease and ability with which America's mass shooters are able to carry out their attacks. For so many, though, guns are as natural as the moon and the ocean. Muslims are the real cancer.

It is to be hoped that this sickness will pass—that it will become as reprehensible to target Muslims in the way that we are targeting them as it is to target black people, or Jews, or any other group we have deemed acceptable members of society. But that will only happen if we demand that it happen. We have to get incredibly angry about what is going on. We have to make it a huge problem for the New York Posts of the world to peddle their hatred. We have to make it stop.