Who benefits when someone shoots up a crowd? The gun industry does.

Mass shootings are a boon to gun makers, as they spur sales. But that opens a door to fight the firearm industry 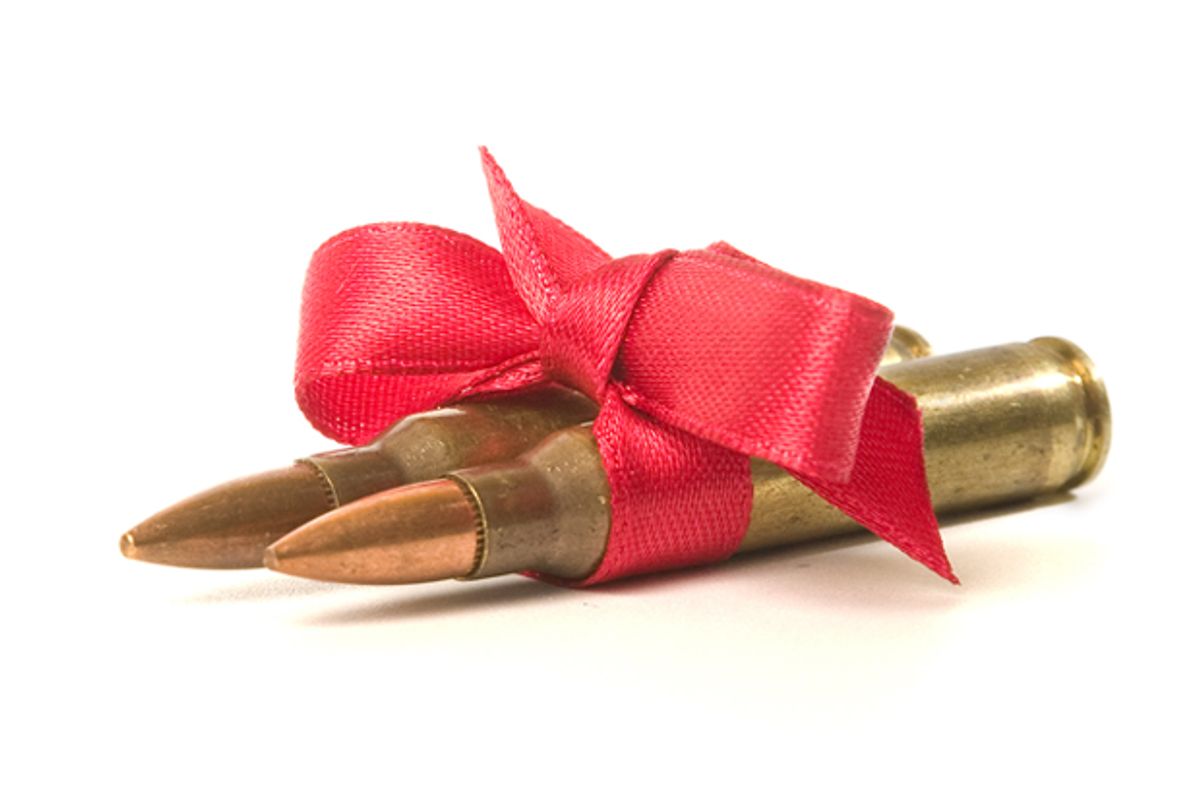 The morning after the appalling San Bernardino shooting that ended the lives of 14 innocent people and the two shooters themselves, a lot of questions remain. Was it a workplace revenge scenario? Was it ideological? A combination? Hopefully soon we will have answers.

But one thing can be predicted with confidence right now, especially as this shooting happened during the holiday shopping season: The big winners will be the gun industry. In one of the most appalling signs of our times, mass shootings function as free advertising for the gun industry, with levels of effectiveness that would make the marketers putting your Black Friday mailers together drool. After every major shooting, gun sales soar. Gun shops are currently gearing up for the major sales boost that Wednesday's shooting will likely bring.

There are two general arguments for why this happens. One argument is that mass shootings raise interest in self-protection. Another is that every mass shooting gets the gun nuts all anxious that President Obama is coming to take their guns, so they run to the store to stock up even more. Hey, if Obama wants to take your guns, having four AR-15s instead of two is really what's going to stop him. That's the ticket!

No doubt both of these theories have some truth to them, but they really fail to capture the full depths of grossness of what's going on. After all, it's not just that gun sales, generally, soar after a mass shooting. Often, it's the gun itself that was used in the shooting that enjoys a major sales boost. After the Sandy Hook shooting, for instance, sales of the AR-15, the gun that Adam Lanza used to mow down 1st graders, rocketed. So did sales of the kinds of high capacity magazines that allow a gunman to more efficiently take out a roomful of children, if that is how he chooses to use his perfectly legal weapon.

It makes a dark sort of sense. Tragedies like the Sandy Hook shooting also work as really great advertising for the specific guns involved. Lanza didn't just show the world how dark his soul was. He also showed them that the AR-15 is a hell of a weapon, capable of robbing dozens of their lives in mere minutes without much fear of jamming. If you're the sort who feels powerful with a gun in your hand — and increasingly, that is the target market for the gun industry — Lanza's shooting was a hell of a sales pitch for the AR-15. They're not really guns made for self-defense and they don't conceal well. But for those who enjoy feeling like they could, if they wanted to, just blast through a wall of people, they definitely provide that feeling.

Sales of body armor also soar after mass shootings, suggesting that something more than self-defense is fueling the post-shooting gun sales. It seems that mass shootings provoke militaristic fantasies, similar to the sort that shooters themselves are often caught up in. Of course, the deaths of the two allegedly body armor-clad shooters in California yesterday should be a reminder to people who have anti-government fantasies exactly how weak that sort of "protection" is when the man comes kicking down your door. Body armor doesn't get you far when two dozen cops are opening fire on your moving vehicle. And yet, body armor units keep moving, because it's the fantasy of invincibility that gun stores are selling.

The profitability of mass shootings is already been felt by gun manufacturers after this shooting.

Ruger also saw a spike in stock sales. As The Washington Post notes, these could just be statistical variations. But the mass shooting effect is well-known among industry watchers. This would be a good time to invest, for the soulless monsters amongst us.

The fact that this is the Christmas season just doubles the boon for gun manufacturers. A lot of people who weren't sure what to get their camo-clad loved ones this Christmas will be reminded by this shooting that oh yeah, high-powered weaponry always brings the smiles on Christmas Day. Why buy your loved one a video game in which they shoot fake guns at mythical villains like zombies, when a real gun is so much more exciting? Sure, they may not get to shoot a real person with that real gun you get them — laws against murder and basic human decency continue to have some effect, even in our age of the "active shooter" — but the fantasy that you will someday have a chance to take life will feel all the more real with a gun in your hands. Maybe you will get a burglar! Maybe Obama really will kick in your door! Maybe the zombie apocalypse will come! Probably not, but the holidays are a time for dreaming, after all.

Ask Sarah Palin. As she recounted in her book "Good Tidings and Great Joy," she decided that the best way to really enjoy the post-Sandy Hook Christmas was to buy another gun.

Nice boobie joke! How fun it must have been at the Palin Christmas, opening presents and fantasizing about spilling blood! Not so much fun for the 26 Connecticut families that Christmas who lost family members in the Sandy Hook shooting, including the 20 families whose presents for their small elementary age school children would go unopened.

There's a lot of talk about gun control and what it would take to actually reduce gun violence and whether it would actually work to restrict sales or increase background checks. This is an important debate to have. But it's also time — it and has been for a while — to take a much harder look at the question of who benefits when some maniac shoots up a holiday party or an elementary school.

Guns are, after all, a consumer item. The marketing is pitched at people like Palin, to suit their resentments and paranoia and fantasies of taking back the power with fire in hand. When some maniac decides to stop living in the realm of fantasy and to take the fight to innocent people, that just reinforces the marketing.

Gun control might be hard to pull off, especially with 300 million guns already on the street. But gun culture, which is spurred on by gun marketing? Now that is something that might be more feasible. Bans on advertising guns is a good start. Repealing the law the protects gun manufacturers from liability would be an excellent move. It's an industry, which means that there's tested means for limiting their marketing and their reach.

If that sounds ridiculous, consider how effective this strategy was against the tobacco industry. Smoking used to be ubiquitous and more than that, it was cool. By going after tobacco not just as a public health menace, but as a cultural phenomenon and as a consumer item, activists were able to completely turn the ship around. People still smoke and some even think it's cool, but it has lost a lot of that rock-and-roll appeal it used to have. A similar strategy could help break the stranglehold that guns have on our culture.