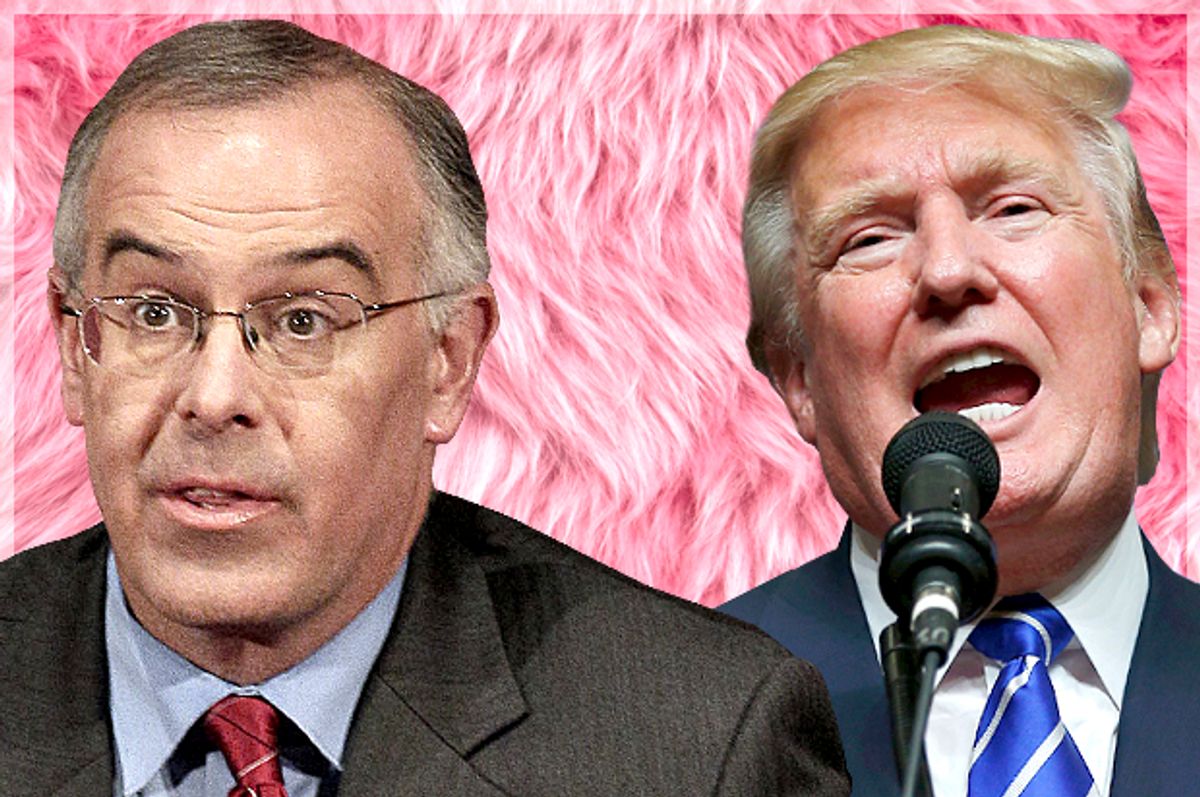 Many members of the Republican elite are finally coming out of the fog and admitting that maybe, just maybe, Donald Trump has a very shot at the nomination, but David Brooks refuses to give up the ghost. In his Friday column for The New York Times, Brooks squeaks out a pitiful, grasping claim that Republican voters are going to wise up at the last minute and choose someone more sensible instead of going with what their hearts are pining for now. To drive home this point, he offers a shopping metaphor:

A little while ago I went rug shopping. Four rugs were laid out on the floor and among them was one with a pink motif that was dazzlingly beautiful. It was complex and sophisticated. If you had asked me at that moment which rug I wanted, I would have said the pink one.

This conviction lasted about five minutes. But then my mentality flipped and I started asking some questions. Would the furniture go with this rug? Would this rug clash with the wall hangings? Would I get tired of its electric vibrancy?

This metaphor tells us a lot about Brooks, though mostly stuff that we could have already guessed: That underneath that buttoned-up exterior lies the heart of a man who wants to own a loud, pink rug, but his timid soul keeps him from living his heart's desire. Brooks is a character straight out of an Edith Wharton story. The pink rug stands in for so many adventures untaken, curiosities unexplored, important life experiences avoided. Readers walk away with a renewed commitment towards carpe diem, reminded of how much they don't want to end up like Brooks, wistfully thinking of the rugs that could have been.

Brooks's rug-shopping experience may be a modernist tragedy in miniature, but in-depth political analysis it's not. It is true, as he says, that FiveThirtyEight laid out a convincing case that your average Republican primary voter hasn't really given that much thought to whom they're going to vote for, and probably won't until the last minute.

But so what? If anything, the impulsive nature of primary voting could give Trump something of an advantage going into the polls. Undecided means undecided. It doesn't mean that you're going to make a good decision when you finally get into the voting booth. Undecideds end up going for pink rugs all the time.

Republican history, though,  suggests that blue rugs don't actually win out every time. In the 1964, 1968 and 1980 primaries, the pink rug candidates — Barry Goldwater, Richard Nixon and Ronald Reagan —all beat out more sensible blue rug opponents like Nelson Rockefeller and George H.W. Bush.

Those elections may seem a long time ago, but those years actually have quite a bit in common with now. Those were all years when the conservative base was fed up with party politics as normal and wanted to remake the Republican Party in its own image as the party of white resentment and later as the party of conservative Christianity.

Looking at the Trump candidacy and the enthusiasm it's engendering, it's arrogant to hand wave away the possibility that this might not be another year like 1964 or 1980. The amount of rage and resentment that the conservative base has towards the Republican establishment is the highest it's been in decades. There's a strong possibility that this is a pink rug year, when the base uses their vote to send a signal about how they want a party that's molded in their own image.

To make everything worse, Brooks is just wrong to assume there's even something like a blue rug pick for voters to turn to this year. Who exactly is this "sensible" candidate that may not be exciting but can get the job done, assuming that "the job" is "appealing to enough non-loony voters to win a general election"?

The people that are nipping on Trump's heels in the polls are just a crazy as he is. Ted Cruz wants to abolish the IRS. Ben Carson appears to think America is under threat from a global chickpea conspiracy. Marco Rubio's war saber-rattling isn't significantly different than Trump's, and he openly rejects the authority of the Supreme Court.

Even if we could be confident that Republican primary voters will cave at the last minute and pick a blue rug, they would need an actual blue rug to vote for. This is a race full of pink rugs. Trump is just the one with the loudest pattern.