"It’s when their hearts and spirits are open": Ben Cohen explains why he's taking the fight for campaign finance reform on tour 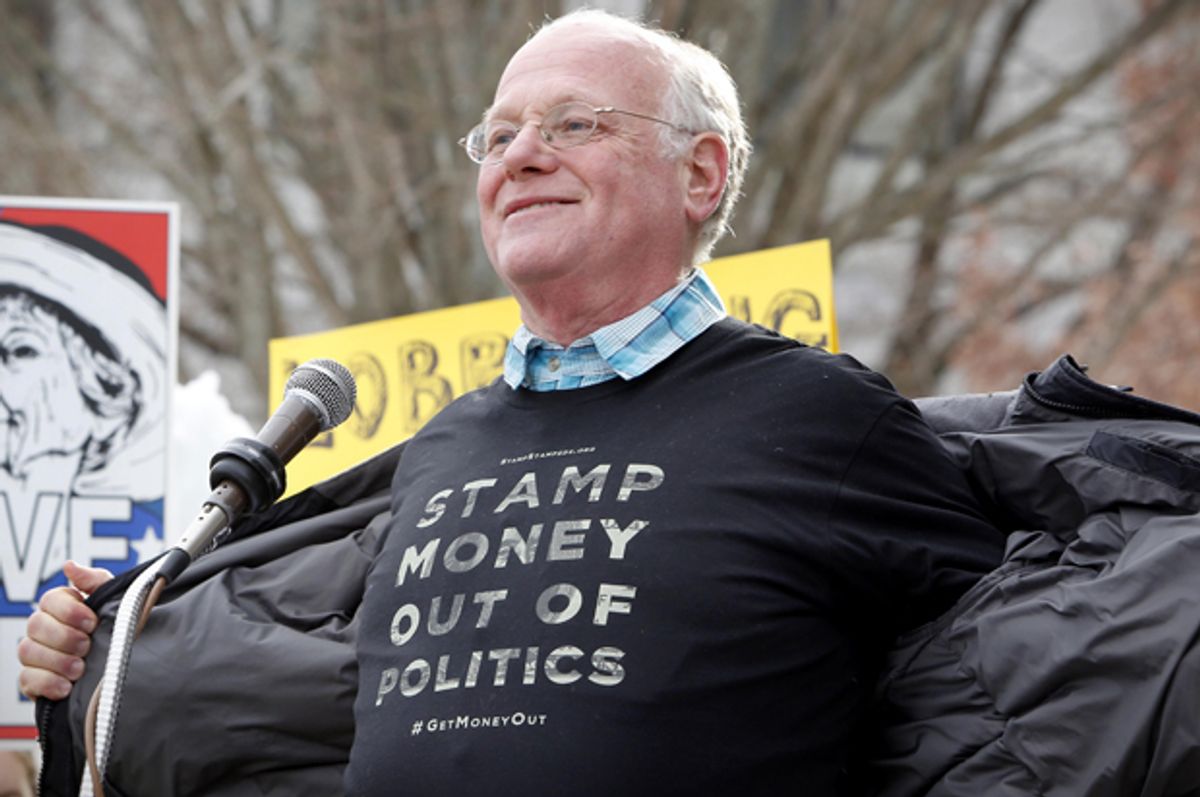 It's no secret that Ben Cohen (of Ben & Jerry’s fame) feels passionately about progressive politics — campaign finance reform, especially. As he told Salon the last time we spoke, "in order to fix what the huge majority of people in the country would tell you is a broken system, we need to get money out of politics." From the beginning, that's what "The Stampede," Cohen's effort to combine grassroots energy, humor, and some good old-fashioned cash has been about.

Recently, though, Cohen's started to expand his campaign beyond dollars and cents into new mediums and venues. Literally. Throughout the fall, Cohen's been on tour with Donna the Buffalo, one of the longest-touring and most beloved jam bands in the country. He's still spreading the word about campaign finance reform, of course. He's just doing it with a better soundtrack.

At this point, Cohen's swing on Donna the Buffalo's tour has is mostly finished. But there is at least one more show upcoming. So if you like the idea of getting money out of politics to the sound of music, and if you can make your way to Plymouth, New Hampshire, on January 28 of next year, you're in luck. If you can't make it, however, you'll just have to settle for this edited Q&A, which stems from a phone conversation Salon recently had with Cohen, as well as Donna the Buffalo's Jeb Puryear and Tina Nevins.

The Stampede project has been going on for a while, but where did the idea to tie it together with music come from?

Ben Cohen (BC): We started the Stampede about two and a half years ago, as a way for everyday Americans everywhere, anytime to be able to express their outrage at the current campaign finance system and to do straight support for legislation and amendment. As part of this campaign, we developed the Amend-O-Matic Stamp Mobile, which has been going around to different music festivals. It was a giant Rube Goldberg-type money-stamping machine. It led to some of these festivals, that Donna the Buffalo have started and run. Jeb and Tara and the rest of Donna the Buffalo, saw this presentation and said, “We gotta take you on the road with us!”

Jeb and Tara, can you tell me a bit more about your thinking? Why did this idea interest you?

Tara Nevins (TN): Ben came down to our  festival and did a presentation. We all heard it, but then Jeb got this idea to take this on the road. So, let Jeb answer this one.

Jeb Puryear (JP): We go to festivals and that’s music based, and then I was thinking about sort of a festival, political conference-merging concept. So this is one of the first steps to run that kind of conceptualization, and I was attracted to the fact that Ben was committed to this particular cause. And this particular cause is good, because it’s not pointedly left-right political, but it’s just basically promoting the honor of democracy. That attracted us to it.

BC: I was very quick, yes. I was an easy mark. I had been wanting to kind of blend the political message with music, because I think when people are listening to music, it’s when their hearts and spirits are open. They’re feeling a lot of love for each other, and they’re feeling like yeah, maybe we can really turn this country around and get it back to the way it was supposed to be.

I’m curious about the relationship between music and these kinds of populist political projects. When you’re talking about doing something that’s not partisan — not exclusively Republican or Democratic — is there a connection between that kind of universalism and the way people experience music?

TN: I think so. Not to coin a very old, used phrase, but music is a universal language. I think the message that we’re helping Ben spread is a very basic, pure universal message of fairness and something everyone can relate to - no matter who you are or who your candidate of choice is, or what party you belong to. The thing with music is, it washes over people in the same way and music seeps into you, in a way that you can’t describe. It kind of gets in there and I think, when a band, say us, is playing on stage and we’re playing our music, delivering that to an audience along with a message, it just makes the whole thing more porous -- more like a sponge, you’re able to soak it in.

JP: It’s not like we don’t have pointed political beliefs that we believe are worth arguing for. It’s just for this particular issue to take off and reach critical mass, it needs both sides to embrace it.

TN: You’re going to turn people off, if you go off with a certain argument for a certain issue or sentimentality. You don’t only want to preach with the choir. And a lot of people, with this Stampede, for some reason – I don’t know if it’s because Ben Cohen is doing it, and people in the know know that he’s a Bernie Sanders supporter – it seems like even if they don’t know any of that, they still have the feeling that we’re coming with this leftist message. But it’s not. It’s a Republican message. It’s an Independent message. It’s a Democratic message. I think it’s very important just saying that, sure, we all have our beliefs, but not to include them or push them necessarily in this, because this is an umbrella over our entire picture.

BC: The reality is that 85 percent of the public — Republicans and Democrats alike — all realize that the campaign finance system is broken and needs major overhaul. I think that there have been a bunch of different attempts and political action put into music festivals. I think one of the real difficulties is that when people are there at the festivals, they want to do something. They’re down with what’s being said, and then the concert or the festival is over, and it just gets lost.

I think that what we’ve been able to do here with the Donna the Buffalo tours and concerts is that people can buy a stamp, to stamp money out of politics, to stamp it on paper currency here at the event. And we cut the price in half to $5, so people are able to take the activism with them, when they leave the event. We’ve been really happy to see that 50 percent of the audience is going home with stamps.

BC: We didn’t have to load as many boxes of stamps back on the bus!

Along the same lines, I wanted to ask you folks if you had any experiences with people who were there just for the music or who weren’t particularly political. Has anyone been grumpy about the political aspects?

BC: There was one gentleman, at one show, who claimed that we were “harshing his mellow.” But those are in the extreme minority.

JP: People are, rightfully, so, very turned off with politics.

BC: What we’ve been focussing on at the events is the overwhelming percentage of money from corporations that is being paid in a system to politicians — in a system that John McCain called “legalized bribery.”

How do you try to broach those issues during the show, then, if they’re so volatile or likely to turn people off?

BC: We found ways to make the education part of it kind of entertaining. We have this huge giant inflatable that shows how much regular people give to politicians versus how much corporations do. This inflatable bar, which represents corporations, ends up going literally through the roof of the venue; it kind of sinks. And then we have another demonstration dropping BBs.

BC: You drop the BB into a bucket and you say, “In this demonstration, each bean is going to be equal to $600.” And then I say, “I’m going to drop in the amount of beans that represent if 90 percent of the American public donates to politicians” — and it’s nothing. You don’t hear any sound. And then I say, “How much does [the top] 9 percent donate?” It ends up being $60 per person. And then I say, “Let’s see how much the average person in the top 1 percent donates.” It’s six BBs; $3,600. “And here’s how much the average top contributing corporations donate” — and it’s 10,000 BBs. A huge racket.

TN: Which lasts for a long time.

JP: Long enough for Tara to head into the green room and get a beer.

I know Ben is a supporter of Sen. Bernie Sanders, who talks a lot about campaign finance. Do you think, though, that we’re talking enough about this issue during the presidential campaign itself? Even with Sanders banging the drum, it feels to me almost like we discussed the issue more before an actual campaign started.

BC: The big problem in terms of the presidential debate is that, the moderators are not asking the candidates questions about it. They’re not bringing the issue up. Especially in terms of the Republican debates, you have a bunch of Republican candidates talking about how bad the current situation is, but there’s no follow-up question saying, “OK, what’s your solution? What are you going to do about it?”