The Second Amendment must go: We ban lawn darts. It's time to ban guns

We are one nation, forever f*cked by the NRA and an outdated and dangerous read of the Constitution. Let's fix it 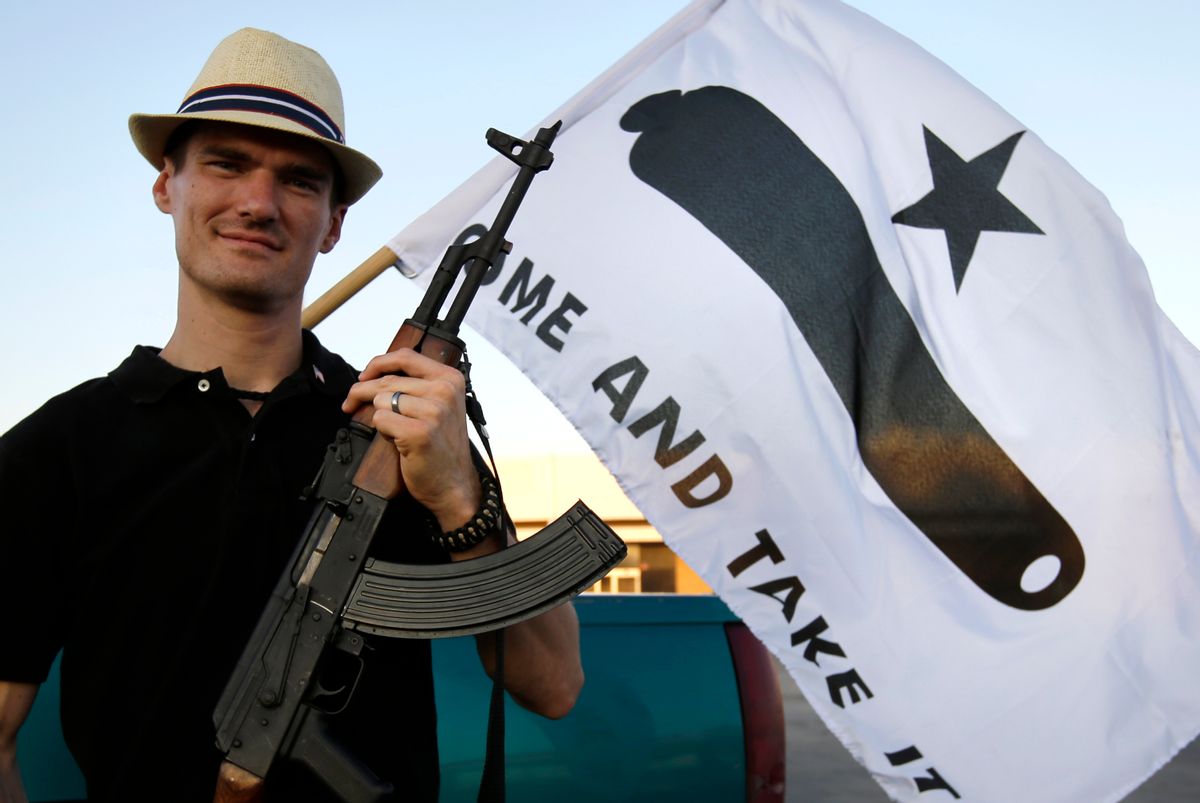 Our youngest son just transitioned from crib to bed. Since we don’t plan to have any more children, we decided to sell the crib, a hand-me-down from his older brother. It’s a nice, well-made crib, made from real wood and bought from a reliable company. We could easily resell it for a handsome price, but we found out a few weeks ago that we can’t. It’s a drop side crib, and unbeknownst to us the Consumer Product Safety Commission (CPSC) banned the manufacture, sale, and resale of drop-sides in 2010, even though individuals can unadvisedly still use them. Drop-sides were responsible for more than 30 infant and toddler deaths in the decade prior to their ban, along with thousands of injuries. We hadn’t realized that our kid had been sleeping and playing in a death trap.

A few accidental deaths are often enough to ban certain items, or at the very least recall them, and often without much fanfare. It’s strange that we don't have the same reaction to guns. Guns have killed many more infants and toddlers than drop-side cribs, not to mention older children, adolescents, and adults. Guns have killed many more than a host of other objects not originally designed to kill. Remember lawn darts? The CPSC banned the sale of the metal-tipped ones after three deaths and numerous serious injuries.

Yet when it comes to guns, we collectively do nothing, except spout off some strained political rhetoric every now and then, that is, after the most recent mass shooting. [Add in prayer here.] Or we dig in and cite our constitutional right to bear arms, which apparently trumps death, even the death of children. There’s a lot of room for debate regarding the meaning of the second amendment. I doubt very much that our “founding fathers” envisioned that right in its current form, but even if they did, it really shouldn’t matter. The framers of the constitution weren’t gods, meaning that their words aren’t—and shouldn’t be—sacrosanct.

We know this intuitively, since we’ve had to add numerous amendments to make up for their failures, lack, or just plain ignorance. But if we can add, we can also take away, by interpreting the Second Amendment differently or passing a new amendment that would effectively repeal it. We should never do so lightly, of course—taking away rights can be, and often is, a risky enterprise. But the purpose of a right should be individual and collective flourishing. A right, in other words, has as its goal the individual and common good, even if we don’t like to use such weighty moral terminology nowadays.

It’s not clear to me that gun ownership accomplishes that purpose. It seems more the case that it works against the good of all, in the havoc and murder it wreaks but also in the fear that in promotes. At the very least, we should have a discussion about the relationship of guns to the common good, instead of appealing like a fundamentalist to “rights” every time something happens that questions their value.

Guns don't kill people, people do, someone will say. But people use guns to kill people, and it makes it much easier to do so, including on a mass scale. The idea that guns aren’t to blame but the actions of people is misguided and unthinking, to say the least. Specifically, it ignores what guns are for. A crib or, perhaps, a car, may kill under certain circumstances, but that’s not what a crib or a car is for. When death does result from their use, we assume that they have, in some way, been misused. At the very least, they have failed to fulfill their intended purpose, intentionally or not. Not so with a gun. The whole point of a gun is to injure or kill. Guns can certainly be used in other ways and for other reasons, such as sport, but these are secondary to its primary function. When a gun is used to injure or kill, it’s being used as intended. It’s the gun that’s at issue, because of the type of object that it is.

But the problem is irresponsible gun owners or criminals, not the overwhelming majority of law-abiding citizens who choose to own and use guns responsibly, people say. A fair point at one level, but most everyone’s responsible and law-abiding until they’re not. People in committed relationships usually go into them with fidelity in mind, yet infidelity is common and, often, unexpected. It’s similar with guns and gun owners. No “responsible” gun owner ever thinks he’ll ever misuse his gun—until he does something stupid, gets angry in the wrong place at the wrong time, leaves it unattended with children around, or simply snaps. Perhaps that doesn’t happen most of the time, but it happens frequently enough to raise questions, even though we usually don’t.

To say as much isn’t a commentary on gun owners per se, but on human beings. We can screen the “mentally ill” all we want, but the ill aren’t necessarily anymore susceptible to stupidity, anger, or crime than “normal” people. I’m all for providing more affordable and accessible resources for dealing with mental illness, but let’s not pretend that doing so would actually solve our gun problem. Putting the burden for gun violence on the mentally ill is little more than an all-too-convenient sleight of hand, one that results, moreover, from a misunderstanding of mental illness. The burden, rather, should be put on gun owners themselves, especially those who rebut any attempt to make access to guns more difficult, and on society as a whole.

The mass shootings that plague us, and the daily individual acts of gun violence and death should, however, lead us to make access to guns more difficult. We should, that is, seek to “control” access to them and their use. But even that’s not going far enough. We should get rid of them, that is, ban them. Guns create too many problems, promote too much fear, and lead to too many deaths to not consider banning them. Perhaps they were necessary at some point in our history, but let’s declare that that time has run its course.

We shouldn’t “take them away” from people who currently own them, necessarily. That would likely cause just as many problems. I’m sure there are more than a few disgruntled gun owners out there who would take a ban as an assault on liberty, and act accordingly. We should, rather, phase them out over time, similar to the way in which the CPSC dealt with drop-sides. Allow those who currently own guns to keep them, but ban the future manufacture, sale and resale of guns and ammunition for personal use. Without a continually expanding and revolving supply of licit guns and ammunition immediately at hand, the hope is the gradual depletion of their circulation and utility. Calling it a contemporary version of beating swords into ploughshares.

There is, of course, always the black market, where the “criminals” go anyway to get their guns. Those who deserve guns least will be the only ones who have access to them: the “bad guys.” Perhaps. But the mythology of the “bad guy with the gun” is rooted more in ideology and fear than fact, and is perpetuated by the easy flow of guns in the first place.

Besides, the black market for guns already depends upon an overabundance of guns, meaning a ban would affect it as well. It likely wouldn’t eradicate it, of course, and there’s no reason to assume otherwise. Nevertheless, coupling a supply problem with severe penalties could do much to curb such illicit markets, making them unattractive and out of reach for most people, criminals included. That would be a good thing, for the “good guys” and the “bad guys.”

Call me naïve or any number of other things, but my suggestion is no more naïve than most of the arguments that gun advocates trot out on a daily basis. It’s also no more naïve than thinking that we’ll solve our gun problem with half measures or, even worse, doing nothing.