Who's really getting naked at the gym: "There has never been more voyeurism and exhibitionism in the locker room than there is now" 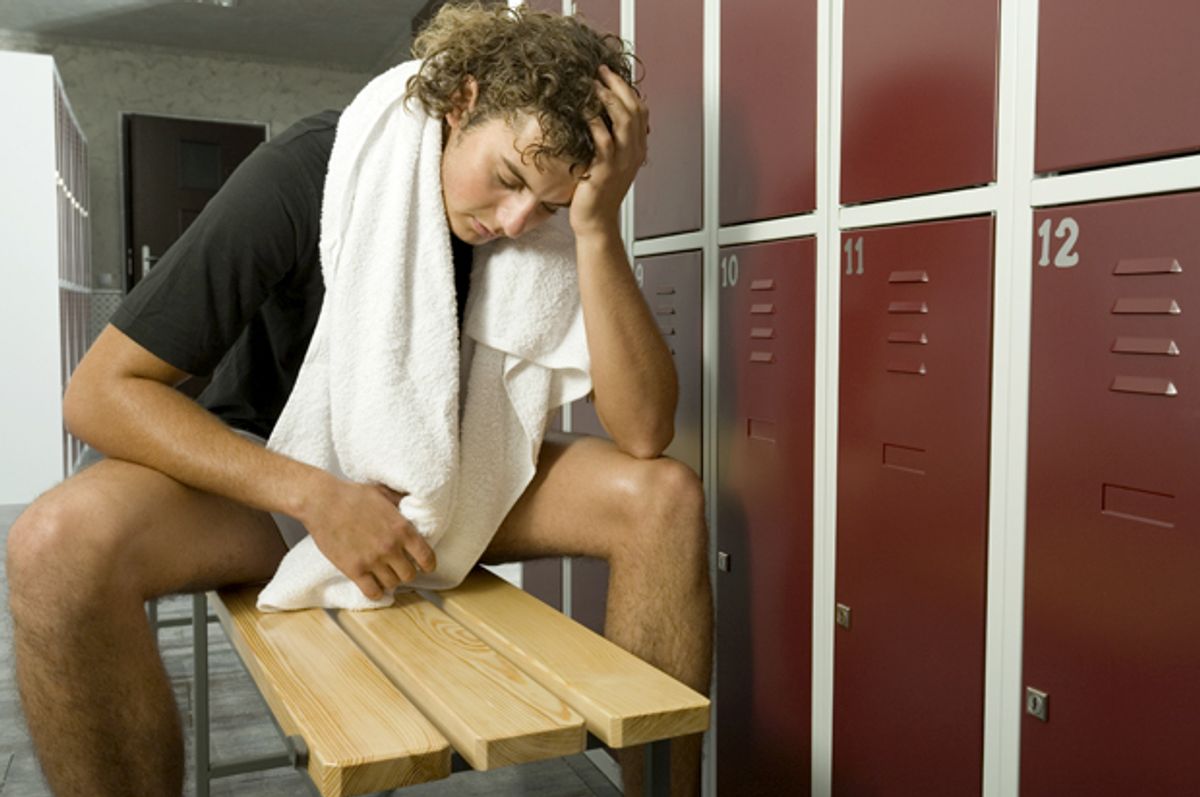 What kind of room is the locker room? In a post "50-Shades" world, it's resonant with new and kinky possibilities. Because there's one thing about a locker room that you can't get past: at one point or another, you'll be naked. Near benches.

For anxiety-ridden adolescents, the locker room is a torture chamber. Who can forget the tampon scene in "Carrie," which set the tone for horror films to come?  Yet fast forward a few decades, and now we not only have entire episodes of sit-coms such "2 Broke Girls" set in a locker room ("And the Gym and Juice"") but that very room has become a selling point making pricey health clubs more appealing. What happened?

For the New York Times, Choire Sicha explains that while gym designers have worked hard to "make the locker room not sad, not alienating and not a place that smells like butts," there's still one major need missing: "Each day, thousands upon thousands of men in locker rooms nationwide struggle to put on their underwear while still covered chastely in shower towels, like horrible breathless arthropods molting into something tender-skinned. They writhe, still moist, into fresh clothes."

I've been to Sports Club LA and felt the same way as Max on "2 Broke Girls": the locker room for ladies is soooper nice. But Sicha's piece is really about the shivering, naked millennnial men who are strangely self conscious about their bits and pieces getting too much air time. I thought his piece was pretty funny. But still, I wondered. Are young men really fearful of getting naked in front of other men--not because they're homophobic, but because they don't want to be judged on their looks? Are millennials sensitive to the scopic pleasures of the male gaze being turned on them?

I haven't accidentally wandered into a men's locker room for a few years now.  My point of reference for naked male behavior is the man I live with, who is decidedly unembarrassed about walking around without a stitch on, up to and including wearing nothing but boots while he shovels the snow off the porch. His utter indifference to underpants seems to fall perfectly in line with what David Sedaris has written about naked-man-ness in general, so I asked John Paul Ricco to respond to Sicha's essay.

Ricco is a queer theorist on the faculty at the University of Toronto who has been writing on architecture, sex, masculinity and visual culture for the past 25 years. He calls the health club locker room a site of the "socially mediated phallus."

"Old guys have been parading around locker rooms for decades, and younger guys have been less prone to let it all hang out," Ricco explains. "So this homosocial dynamic of nudity isn't anything particularly new. But I would argue that there has never been more voyeurism and exhibitionism in the locker room than there is now." Indeed, he affirms, "I would say that male bodies—and especially young muscular male bodies—are putting themselves on display more than ever."

One look at the NSFW tumblr "Guys with iPhones" —which really is guys with iPhones in bathrooms — and it becomes clear that the selfies are, more accurately, photographs of the reflected self in the mirror. There is a difference. Given the number of shirtless or naked selfies being taken in front of mirrors in the locker room, Ricco explains, "these guys have turned these places in halls of narcissistic indulgence." In other words, the men's locker room has become a theater for the group performance of literal self-reflection. When they look in the mirror,  these men are not naked, but nude.

The naked body is vulnerable because it's stripped of culture. Abject and ashamed, it is reduced to the visible signs of health, musculature, fitness, thinness, and other markers that determine hierarchy inside a group. It is the condition of being stripped of status that is unbearable, prompting the young to reassert the armor of their street clothing as quickly as possible. Their insecurity isn't lodged in their bodies but in their unstable social positions, which is why more powerful men-- the "old guys" who, in theory, ought to be embarrassed by the grizzle and the hoar--don't care two figs what you think of their butt cracks or belly buttons.

Still, it is true that young men "are very self-conscious of their looks," Ricco states. "Which is why I think those same men are at the gym and looking in the mirror all the time. To try to combat that. The slippery slope from self-conscious to vain?"