What really wiped out the dinosaurs: "It’s only when you have large aggregations of dark matter that it can have this enormous effect" 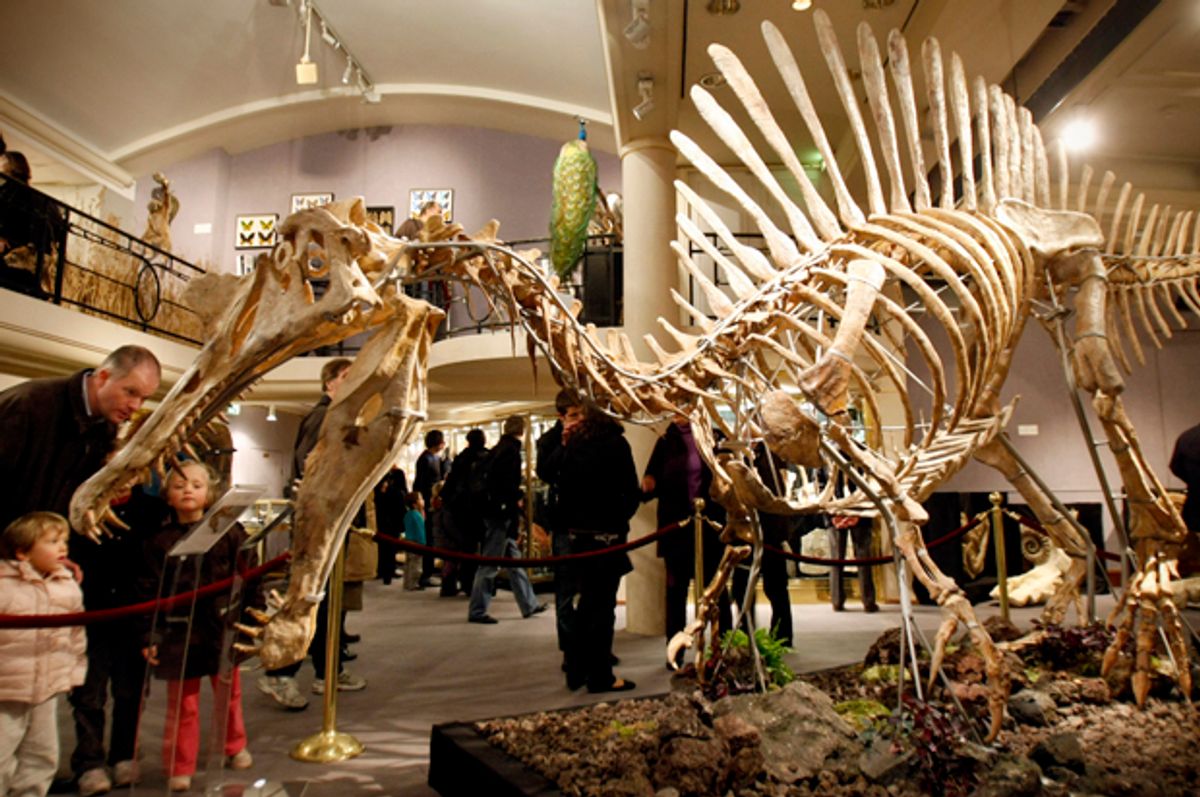 For years now, we’ve assumed that sixty-some million years ago, a comet or asteroid crashed to earth, landing near what is now the Yucatan, creating a huge earthquake kicking up enough an enormous amount of debris, and wiping out the dinosaurs and other large creatures. Lisa Randall, a Harvard cosmologist, speculates that the comet did not act alone: That a disc of dark matter at the heart of the galaxy knocked the comet out of orbit and sent it on its path toward the earth. The solar system’s orbit through the Milky Way allowed this disc to trigger comet strikes every 30-35 million years — which coincides with periodic waves of extinctions on earth.

But what is dark matter and why does it have anything to do with us? Randall explains how this might have worked — complete with charts — in “Dark Matter and the Dinosaurs: The Astounding Interconnectedness of the Universe.”

“A good theory is an act of the informed imagination — it reaches toward the unknown while grounded in the firmest foundations of the known,” Maria Popova wrote of Randall’s book in The New York Times Sunday Book Review. “If correct, Randall’s theory would require us to radically reappraise some of our most fundamental assumptions about the universe and our own existence.”

We spoke to Randall from New York City. The interview has been lightly edited for clarity.

So you were concerned with the density of dark matter, and gave a lecture about your research. How did you end up dealing with the dinosaurs?

I was giving a talk in Arizona, and [physicist] Paul Davies said, “So is this what was responsible for the extinction of the dinosaurs?” Or something of that nature. I had no idea what he was talking about. But then he told me about the weak evidence for periodicity that’s in the crater record.

What it really boiled down to is — is there something in our galactic environment that could trigger periodic meteor strikes? There’s some marginal evidence that large-impact craters occur on a periodic basis — between 30 and 35 million years. Small stuff hits all the time. But the question is whether, with large stuff, there’s something predictive there — that it’s not just random. The suggestion for this is the Oort Cloud. Thousands of times farther away than Earth is from the sun, is a bunch of icy bodies that are very weakly bound … They are so far from the sun that its gravitational force keeps them in a weakly-bound orbit. And they turn into long-period comets. Sometimes their paths get so distorted that they enter the inner solar system.

And sometimes, if you have some kick, it might go out of the orbit altogether. So the question becomes, "What could trigger comet strikes — the dislodging of objects — on a periodic basis?"

Other people had tried to answer this question. But nothing on the ordinary matter sector seemed to work. But if there is this dark disc, as the solar system goes around the Milky Way, it also bobs up and down, along the galactic plane … How often it does that has to do with what’s in the galactic plane, because that’s the force that makes [the solar system] go up and down. Without dark matter, it would do it every 55 or 60 million years — much too slowly. But if there is dark matter, it would happen much more quickly ... The idea is that [the solar system] goes through this dark disc, and that would trigger comet strikes.

So the comet would be already going through the solar system, but it’s this dark-matter disc that would send it our way ...

Let’s talk about dark matter for a minute. It’s sort of an unfortunate name, isn’t it?

I think so. It’s dark in the sense of being obscure. But dark stuff we see, because it absorbs light. That’s why I prefer the term “transparent matter.”

But there’s nothing really evil about dark matter.

No — as far as our daily lives, it’s fairly impotent. It’s only when you have large aggregations of dark matter that it can have this enormous effect. In the history of the universe, it’s had beneficial effects: It’s what allowed objects the size of the galaxies to form ... We wouldn’t be talking about this if dark matter had not been around.

So we can’t see dark matter because light doesn’t reflect off it, but it exerts a gravitational force …

Exactly — dark matter interacts with gravity like any other form of matter, but it doesn’t interact with light.

And it carries five times the energy [of ordinary matter.]

A lot of people get upset about this idea — "Why should there be all this stuff we don’t see?" But I find it remarkable that ordinary matter is as large a fraction of the universe as it is.

Why is that surprising?

There’s a line early in your book that I really like, where you say, “The big lesson of physics over centuries is how much is hidden from our view.” Tell us what you mean by that.

Well, almost the definition of science is it’s telling us the things that are not obvious to us: If they were obvious we’d know them already. As technology has advanced, we’re able to explore both larger and smaller scales.

If you think about it, even something as basic as the atom: You can say the Greeks hypothesized atoms, but they had no idea. They were supposed to be eternal, never-changing objects. The way we found out about atoms is precisely because they change, because they are not fundamental objects — that they are broken down into nuclei and electrons. And if you think about it, we only knew about atoms at the turn of the last century. That’s because we don’t see them … All of this is hidden from of view. And things on the outer edges of the solar system are also hidden from our view. And the earliest galaxies — we’re only beginning to see them.
So there’s a lot that’s beyond our immediate vision, and it takes technology to get there.

One of the things I came away from your book with is that scientists, even the most informed and erudite, don’t know the answers to a lot of the most basic questions of the universe …

I think for me the sign of true wisdom is being able to say, “I don’t know” when they don’t know. People who feel they have to say they know everything are typically not as bright. What distinguishes scientists is the ability to make advances in these questions: We don’t know the answer, how are we going to go about figuring it out?

I guess a lot of what you do is necessarily speculative. In some ways these are, at least in part, thought experiments?

Yeah — I don’t like that word. I know the Times review said that. You can call it that, but really, that’s what science is: You make hypotheses and you test them. Sometimes the data tells you the answer. But a lot of the time, with these really difficult experiments, where it’s really hard to observe things, you really need hypotheses, because you just won’t see things unless you’re looking for them. There are all these psychology experiments — the elephant on the basketball court. If you don’t know to look for it, you miss it.

As I tried to make really clear in the book, this theory is speculative. It’s not my point, or the point of the book, to force people to believe it. It’s more a question of seeing how it ties together — how you can use this to show how what we know about the universe ties together. I learned a lot on this project — it was fun to share. This theory forces us to look at the things we think we do understand more carefully. By having a target, you get a more precise sense of what’s actually there.