Israel's cynical new strategy: Reframe Palestine debate as a religious battle, when it is really about civil rights

Despite a recent Kerry visit, the US has washed its hands of Israel/Palestine talks. After Paris, that's bad news 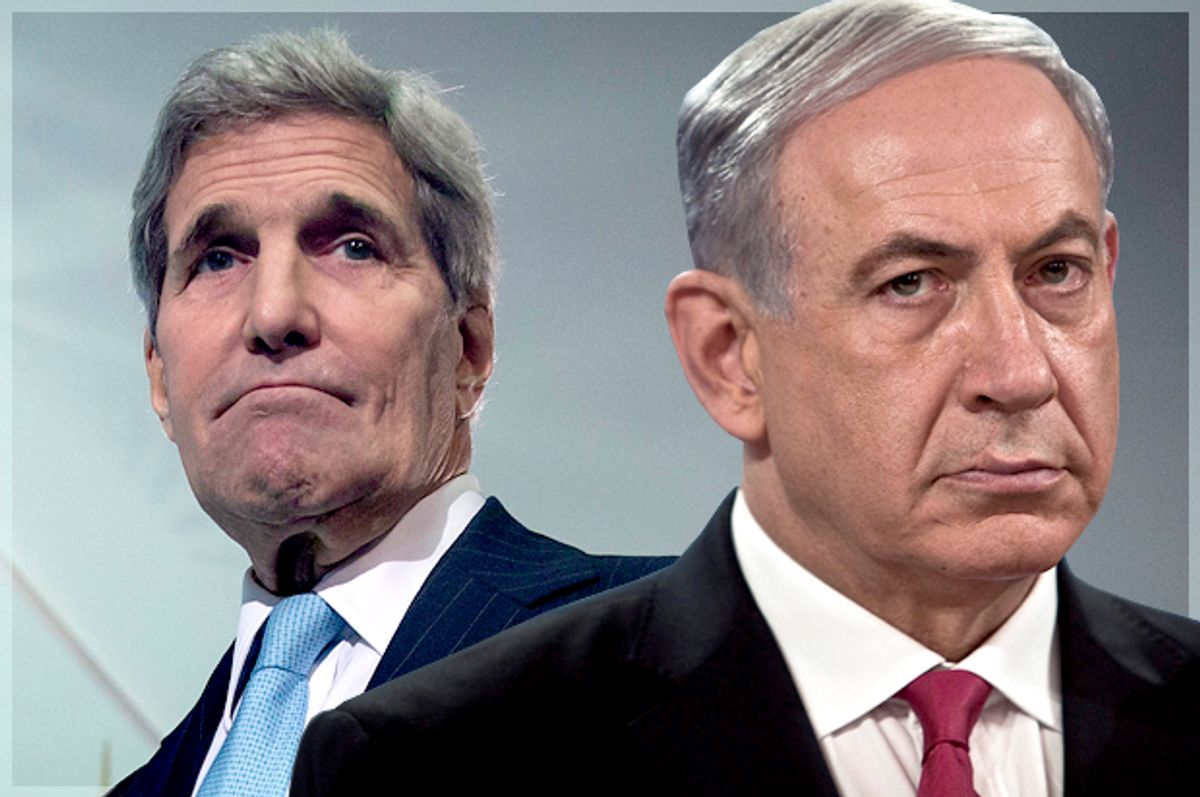 With the focus on Syria, in part due to ISIS and in part to the massive refugee crisis, the threats to world peace because of the Israeli occupation of Palestine have been put on the back burner. Indeed, the U.S. administration has seemingly washed its hands of its efforts to broker peace, despite U.S. Secretary of State John Kerry’s visit to Palestine-Israel last month to discuss confidence-building measures, once again.

Yet there is a dire need to end the Israeli occupation, because Israel’s actions could rapidly and suddenly escalate the situation beyond the occupied territory to encompass Israel itself. Within days of the ISIS terror attacks on Paris, Israel moved to ban the northern branch of the Islamic Movement — despite the objections of its own intelligence chief Yoram Cohen, who had said there was no evidence to link it to terror, and Shin Bet reservations about the ban.

By so doing, Israel amplified Palestinian fears since the clashes began at the Noble Sanctuary compound in East Jerusalem two months ago, that it is seeking to reframe the conflict as a religious war instead of what it really is: A Palestinian struggle for civil and political rights within Israel and freedom from Israel’s nearly 50-year military occupation in Gaza, the West Bank and East Jerusalem.

Even Palestinian citizens of Israel who did not stand in solidarity with the Islamic Movement because they disagreed with much of its program were against the ban, as Nijmeh Ali stated on her Facebook page. Ms. Ali and others have warned that the ban would fan the flames by sending the message that “Muslims were in danger.” This would further obscure the true nature of the conflict and make it far harder to solve than it is at present.

Regardless of one’s views on the Islamic Movement in Israel — including its ideology and its position on women — the ban is seen as an attack on a major segment of the Palestinian people. Member of Knesset and Joint List head Ayman Odeh described it as a “politically motivated” decision intended to hurt Israel’s Palestinian citizens. Already, 66 percent of Palestinian citizens reported in October that they did not feel safe after Israeli police appealed to the (Jewish) public to carry guns, and 72 percent reported high to moderate fear of attacks by Jewish extremists.

Remember, we are talking about Israel, which is portrayed as a democracy in the West. We are not talking about the Israeli-occupied territories, where the Palestinians are under siege in Gaza and are hemmed into disconnected areas in less than 40 percent of the West Bank as Israel’s illegal colonization of Palestinian land forges ahead.  In these occupied territories there is little to no accountability for daily Israeli military raids or even for Israeli settler violence, as documented by the Israeli organization B’Tselem.

Israel would do well to be concerned about the repercussions of its ban against the Islamic Movement on its own Palestinian population as well as the population living under its military control. Framing the conflict as a religious war could lead to all-out strife between Palestinians and Jews throughout Palestine and Israel, dwarfing the violence of the past two months. Palestinians, as the weaker party living under Israel’s military control, will pay a far higher price: Since October 1, over 100 Palestinians have been killed and hundreds injured, while more than 20 Israelis have been killed.

World powers should also be concerned. Israel’s fanning the flames of religious conflict is the last thing anyone needs in the Middle East with the ongoing carnage in Syria, Iraq and Yemen. The Paris attacks gave a renewed sense of urgency to what will certainly be a slow, laborious process of finding solutions that could put an end to the killings, at least in Syria and Iraq — a tragedy to which many European countries and the U.S. have contributed through their misguided policies and military interventions.

Yet the U.S. administration has opted for conflict management rather than resolution in Palestine-Israel. Nor did the gloomy statements by administration officials about no two-state solution during Barack Obama’s term acknowledge any U.S. responsibility for two decades of failure. The truth is that successive. U.S. administrations have continually supported Israel, through military aid and the protection of its UN veto throughout the peace process, effectively helping Israel to double the settlers from 262,500 in 1993 to 547,000 in the West Bank and East Jerusalem, in violation of international law.

The international community would be well-advised to make a renewed effort — one that is truly impartial and that is grounded in international law — to resolve this conflict. Otherwise the “low” level of violence could spiral out of control as Israel escalates its measures against the Palestinian population under its rule — both within Israel and under its military occupation.

Israel’s moves could derail the efforts to end the bloodshed in Syria and Iraq, increase the terrible human suffering and drive more waves of desperate refugees to already overburdened countries in the Middle East, Europe and beyond. It is in everyone’s interests to act to end Israel’s occupation of Palestinian land as a first step on the long overdue road to peace and justice.

Nadia Hijab and Alaa Tartir are, respectively, the Executive Director and Program Director of Al-Shabaka: The Palestinian Policy Network.