Enough with the starry-eyed "Imagine" nostalgia: Let's remember John Lennon without the illusions

Thirty five years ago, we lost a brilliant and difficult figure 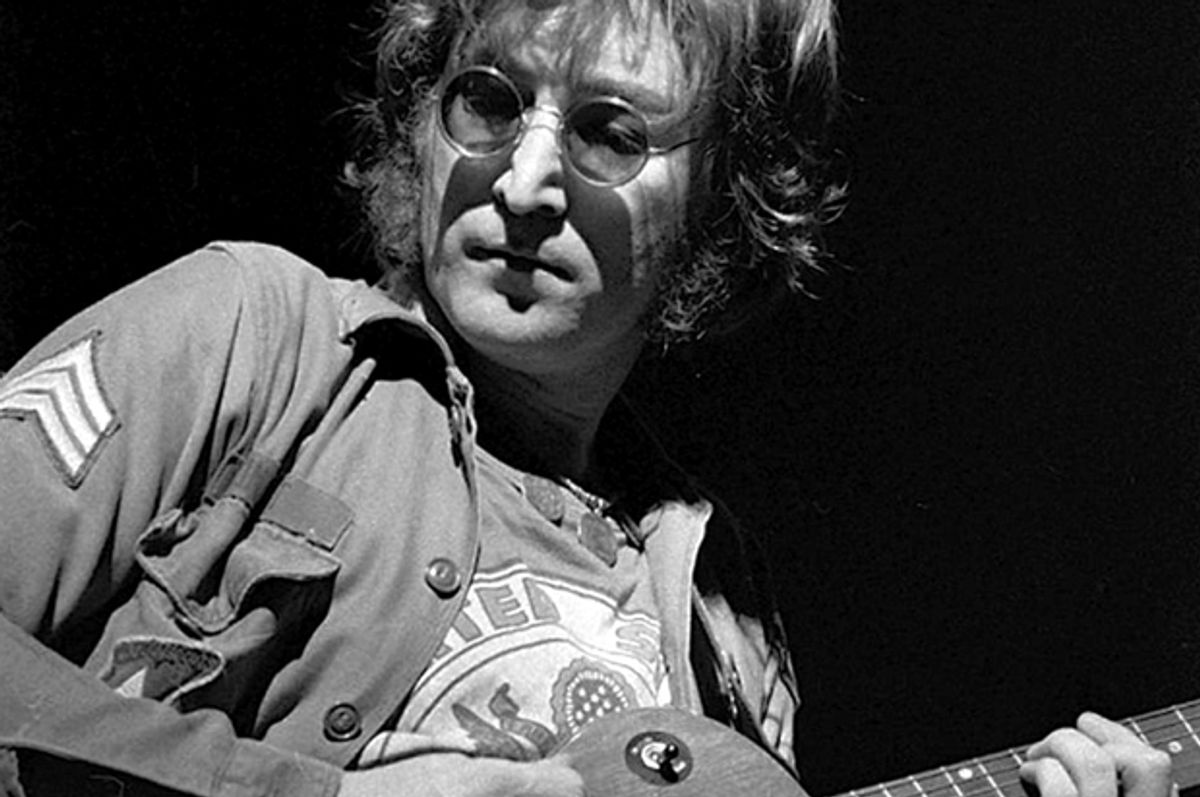 On the 35th anniversary of John Lennon’s murder in New York City, social media is raging. Pictures of Lennon in his Beatles moptop or his shaggier ‘70s state are appearing by the thousands; the lyrics from “Imagine” are easy to find on Twitter today. There are photos of Strawberry Fields in New York Central Park, and descriptions of how his shooting was reported that night.

You can find plenty of reminiscences of the murder and its aftermath, like this from Time:

In the days after Mark David Chapman shot John Lennon on Dec. 8, 1980, the area around the gates of the Dakota, Lennon’s apartment building in New York City, quickly turned into a makeshift memorial. Flowers and signs from fans quoting Beatles lyrics were displayed alongside the more official remembrances, as world leaders made their way to honor an artist whose life had been ended too early.

Lennon was one of the greatest musicians in the history – easily one of the most talented singers and songwriters of the rock era – and he was a key part of what may’ve been the greatest rock band ever. His loss at age 40 was devastating to a lot of us, not least because he seemed to be coming back up for air after a long period of public retreat.

But that dark day looks a bit different now than it did in 1980. To understand Lennon’s death, it’s worth looking at what we’ve learned since. It makes his life and death seem a bit more complicated -- even to someone like me who spent his childhood worshiping him.

First, the heart of the Beatles legacy – the Lennon/McCartney songwriting partnership – was not quite the happy marriage we once imagined. Or rather, it ceased to be after 1964 and maybe earlier. There’s some disagreement on just how close or far the two were on songs once considered collaborations. “The truth may never be established,” Ian MacDonald wrote in the 1997 edition of “Revolution in the Head,” one of the most detailed looks at the band’s music. “Each a self-sufficient writer, McCartney and Lennon saw their working relationship as one of mutually interested (and, at their happiest, mutually enthusiastic) business partners,” with, he writes, 1965 as a period of profound tension. In the book’s song-by-song description, MacDonald documents recording sessions to which Lennon did not even show.

These days, it’s less shocking to say that there are “John songs.” But in 1980 – despite some discussion of the songwriters’ autonomy – many more informed people considered the creative partnership a fully collaborative, if tension-filled one. (The writer Joshua Wolf Shenk, by the way, argues in his book “Powers of Two” that despite some ruptures, Lennon and McCartney kept working together until the very end.)

Second, Lennon was AWOL during the last few years of the band, and much of the band’s adventurous side – from the interest in contemporary art to the influence of experimental music – came from McCartney. Many of us thought of Paul as the square Beatle, and John as the arty one. But much of what’s come out since Lennon’s death shows how crucial McCartney was to pushing the band forward. John, meanwhile, was nursing a drug habit in the suburbs for some of that time.

“Here, There and Everywhere,” the 2006 book by the Beatles’ recording engineer, Geoff Emerick, makes clear that McCartney kept the band together during the last few years. It was John, much more than Yoko, who introduced most of the strain.

The rise of respect for George Harrison’s contributions – and his championing by musicians like Elliott Smith – have come at John’s expense as well, since Lennon played a role in keeping Harrison marginalized as a songwriter on the band’s albums.

Third, Lennon could be a good friend and a lot of fun; he could also be an awful human being. It’s not polite to speak ill of the dead, but Lennon’s transgressions have been well-documented since his death, and his son Julian has been especially hard on him for effectively abandoning him when he was a child. Lennon had a painful childhood that left him deeply scarred. But it doesn’t entirely excuse the way he treated the people close to him.

Lennon was, then, a very hard guy to make simple sense of, especially as more history has come out.

Finally, it seemed in 1980 that Lennon’s murder by a deranged fan with a handgun would lead to a serious, sustained, and consequential movement for gun control. Those hopes – despite great effort -- don’t seem to have gone as far as a lot of us hoped. You can lament, as I do, Lennon’s sins and shortcomings -- and want to remember him without illusions – and also wish we were a bit further along on this one.