I got tossed by Donald Trump's goons: This is what happens when you speak up at a Trump rally

I went to a Trump rally with honest curiosity. I heard hate, raised my voice to chant, and was suddenly surrounded 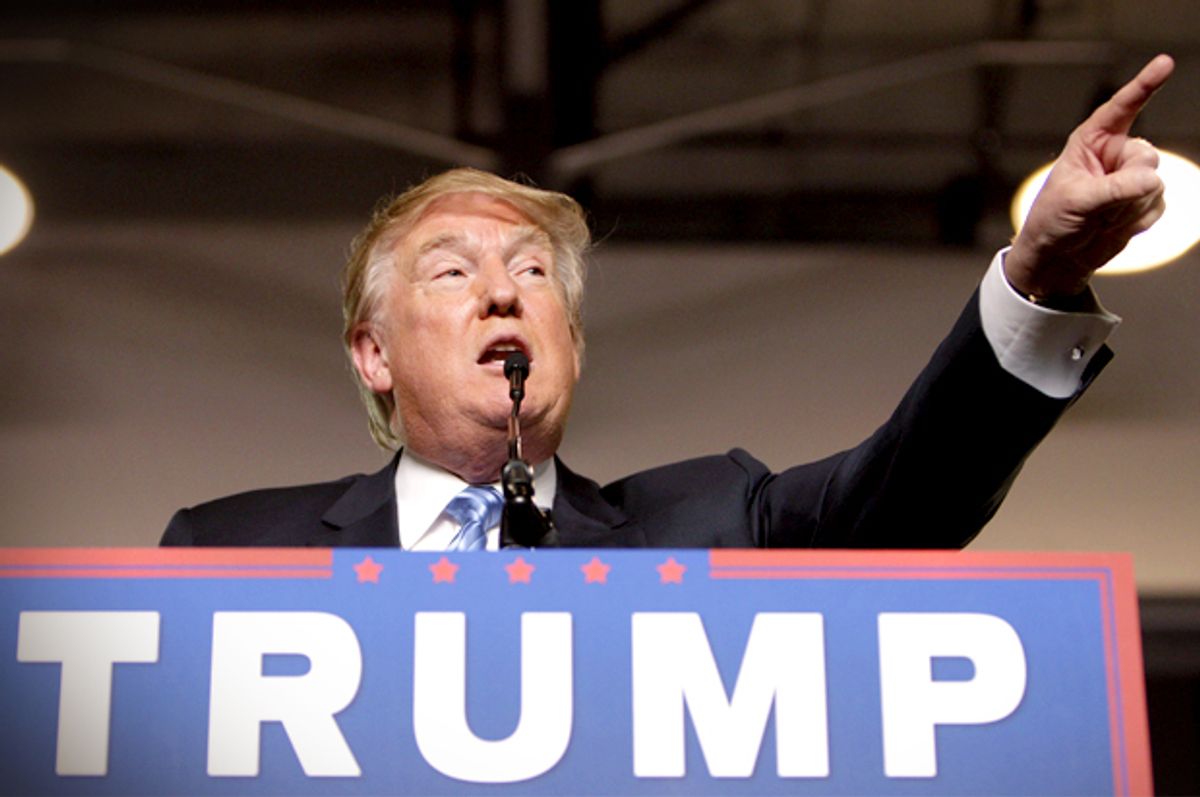 Donald J. Trump's rally this past Friday night in Raleigh, North Carolina, was interrupted several times by protesters. I am proud to say that I was one of those escorted out of the arena for speaking up against the hate and fear being spewed from the podium.

Upon entering the arena I had no intention of protesting. I went out of curiosity, to try and understand what draws people to Trump and to hear what he had to say for himself. I had no signs and no association with any activist group. However, after listening to Trump speak for over 50 minutes it became clear just how dangerous this man is to the social fabric that makes America great. I knew I would not be able to live with myself if I did not speak up. Therefore, after a question from a supporter insinuated that we need to fear Syrian refugee men because of what they will do to Christian women in Europe and America, I snapped and started to chant “Love, not hate, we are not a fascist country!”

Trump is far from a great public speaker. His remarks were incoherent and scattered at times. He offered no substantive policy solutions and went through a long list of vague promises, sadly not much different than other presidential candidates. I personally want to know how Trump intends to make Mexico pay for his Great Wall of Fear. However, what he does extremely well is tug at his supporter's fears, hate and nationalistic pride.

Throughout his speech Trump appealed to the notion that there is a certain America that needs to be brought back to greatness. In fact, "Make America great again" is one of the campaign slogans and it adorned the hats of numerous supporters around me.

To the "silent majority," as Trump supporters call themselves, their America is under attack by outsiders (mainly immigrants and Muslims). After a few conversation with supporters before Trump took the stage and then hearing the man himself, it became obvious that the "silent majority" is blinded by their hate and fear of the uncertain future they face in an ever changing America.

Trump has been able to stir these feelings to a boil and rise to the top of the polls as a result, and it now seems that other Republican candidates will follow suit, especially given the recent terrorist attacks that have heightened people's fears.

Change is never comfortable. It is always easier to embrace the past, especially when the past is remembered as a great time in history when the average American family had economic stability, felt safe, and was mostly white Christians. But like it or not, the face of America is changing due to immigration and freedom of religion, ideals which have made America visionary and prosperous. It is unfortunate that there exists so many Americans unable to accept this simple truth.

The invocation at the beginning of the rally made it clear, that for those in the crowd, The United States of America is a Christian nation that must be saved from the nonbeliever and that Trump was their messiah. For such strong proponents of the Constitution, especially the Second Amendment, Trump and his supporters really did not seem to have a good understanding of the First Amendment.

After I was escorted out of the rally, I read that Trump claimed to want to unite America. I find that ironic considering the displays of blatant Islamophobia and xenophobia cloaked under the banner of security and nationalism that I was witness to. It was unsettling to hear supporters chant U.S.A.! U.S.A.! U.S.A.! as Trump made statements that go against the very ideals and beliefs that make America great. There is no hope in uniting America when Trump advocates the mass deportation of millions, hints that he will violate international human rights laws against torture all in the name of American security, calls for a mandatory registry of Muslims in America and blankets an entire religion of a billion people because of the action of a radicalized segment.

Trump's rhetoric was nativist and nationalistic, with undertones that bordered on being fascist.Our united voices must be louder than those that spew fear and hate. "Never Again" should we allow fear and hate to be driving the force for any of our political leaders.