Stewart is launching #WorstResponders to get Mitch McConnell and the Senate to do the right thing. 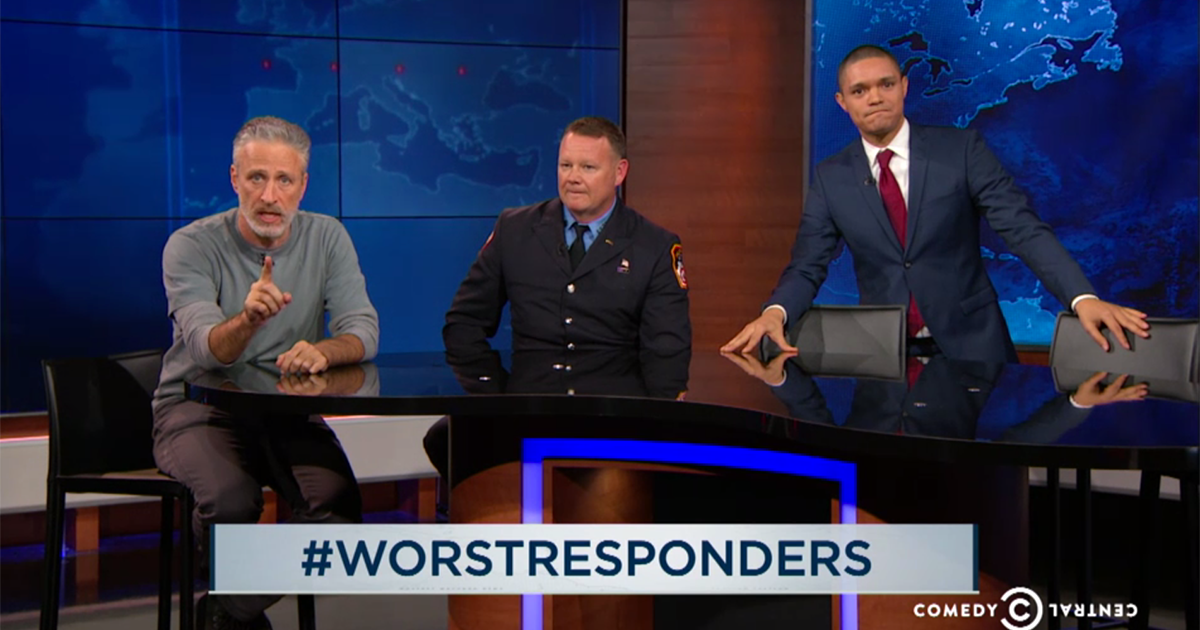 No, you don't need to adjust your television, a bearded Jon Stewart has not taken back "The Daily Show," but he did join Trevor Noah on Monday evening to discuss something he's been a huge advocate about.

“I can't believe it! This is awesome!” new host Trevor Noah exclaimed. “Oh, wait, wait, wait, shit, are you here to take the show back? I heard about this in American TV,” referring, of course, to the clusterfuck that was the "Tonight Show."

But, no, it was about something more important. “I have this issue I care about very deeply and I was wondering, I want to get attention paid to it, but I was realizing I don't have a show, and nobody gives a shit anymore," Stewart said honestly. "So I thought, you have a show, and maybe I could come and…" he trailed off flexing his puppy-dog eyebrows.

Last week, Stewart was on Capitol Hill irate because Congress never extended the post 9/11 benefits. In fact, there is still no permanent law to help the more than 33,000 people who are still getting 9/11 related medical care. Oddly enough, most members of the House and Senate are signed on to the bill, yet the bill hasn't been passed by either chamber of Congress.

“Of course there was no reason not to renew it permanently, but they did not renew it anyway!” Stewart said of what is called the Zadroga Act. “It expired in September. Soon to be out of money, these first responders, many sick with cancers and pulmonary disease, had to travel at their expense to Washington, D.C., hundreds of times to plead for our government to do the right thing.”

“The only conclusion that I can draw," he added, "is that the people of Congress are not as good a people as the people who are first responders."

They ran a video of Stewart's work in The Hill meeting with officials or staff. "These guys are all dying," Stewart said to Rob Portman’s communications director. "So we would like to stop that." Later he ran into Portman and shamed him and other members who haven't done the right thing. Ultimately, it worked so Stewart concluded that shame might actually be effective.

But it's what he does to Mitch McConnell that you're really going to want to watch. Stewart even chokes back his turtle impression before saying that last week the first responders were told the Zadroga Act would be included in the transportation bill passed last week. But it was Mitch McConnell who pulled it out. "Mitch McConnell doesn't give a shit about anything but politics," Stewart ultimately said. Because of this, Stewart is launching the hashtag #WorstResponders and begging people to tweet to McConnell and members of Congress.

Stewart then invited the panel he had 5 and a half years ago back on the show. Only, 75 percent of the panel couldn't appear. You're going to want to see this: