Stephen Colbert slams the do-nothing approach to gun control: "There has to be some way to make it harder to build up an arsenal" 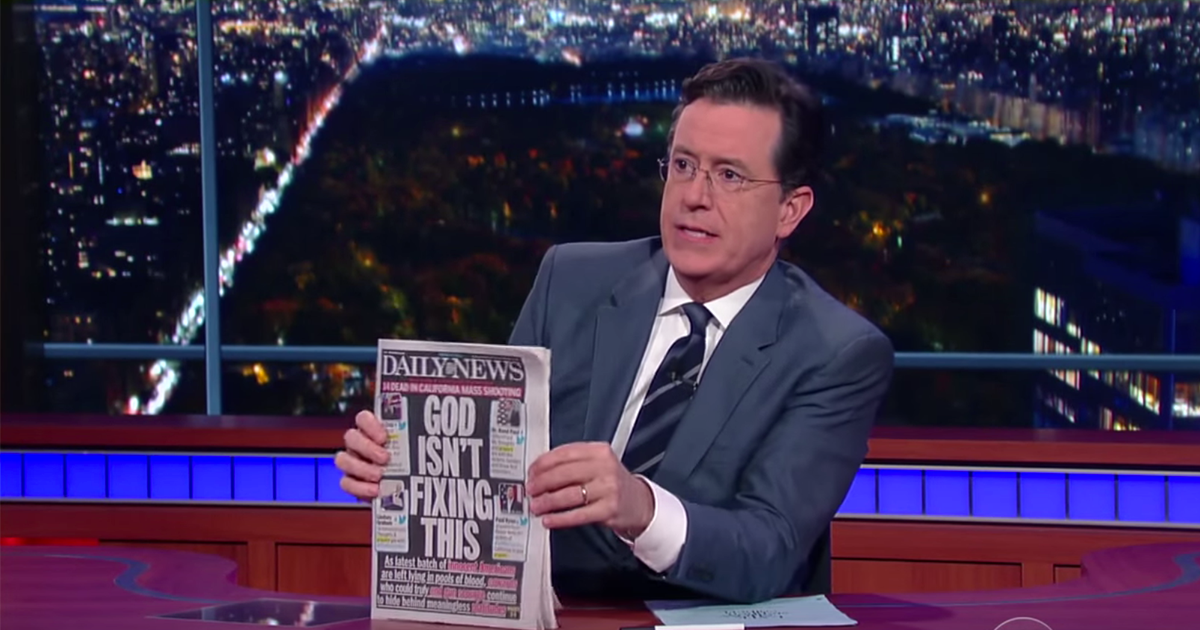 "The Late Show with Stephen Colbert" was off last week and consequently wasn't there to comment about the San Bernardino shooting, the string of "thoughts and prayers," the demands for more guns or the inevitable Islamophobia that followed. But that didn't stop Colbert from taking a few minutes out of Monday's show to address the shooting.

After the Catholic host defended the idea of "thoughts and prayers," as seen on the New York Daily News cover, Colbert then referenced President Obama's speech Sunday evening where he called the San Bernardino shooting an "act of terrorism." Colbert said that the motivation does matter, "because when we decide it's an act of terrorism, we do something about it. Sometimes, too much about it. The next thing you know the NSA is reading your Netflix queue and what would have been your Social Security safety net is being shipped in hundred dollar bills to Bagdad," he joked ... a little too on the nose.

"But when it's not a terrorist attack we do nothing," Colbert said before asking why there can't be anything in between. "There has to be some way to make it harder to build up an arsenal." He said that the shooters had well over 6,000 rounds of ammunition before wondering why it is so easy for people to purchase bullets when he must show several forms of ID to buy Sudafed. A man in the audience shouted "yeah!" and the audience broke out into applause.

"Of course, some people say, 'if you outlaw guns only outlaws will have guns,' but then at least you'll know who the outlaws are," Colbert said. He admitted that he doesn't know what he's talking about and you could tell that he struggled with what should be done, even going so far as to suggest "maybe we arm everyone" and mandate obscene amounts of training. He said that it may be the only way to prevent the world's biggest "Mexican stand-off."