"The Daily Show"’s desperate move: Bringing Jon Stewart back to give Trevor Noah a credibility bump 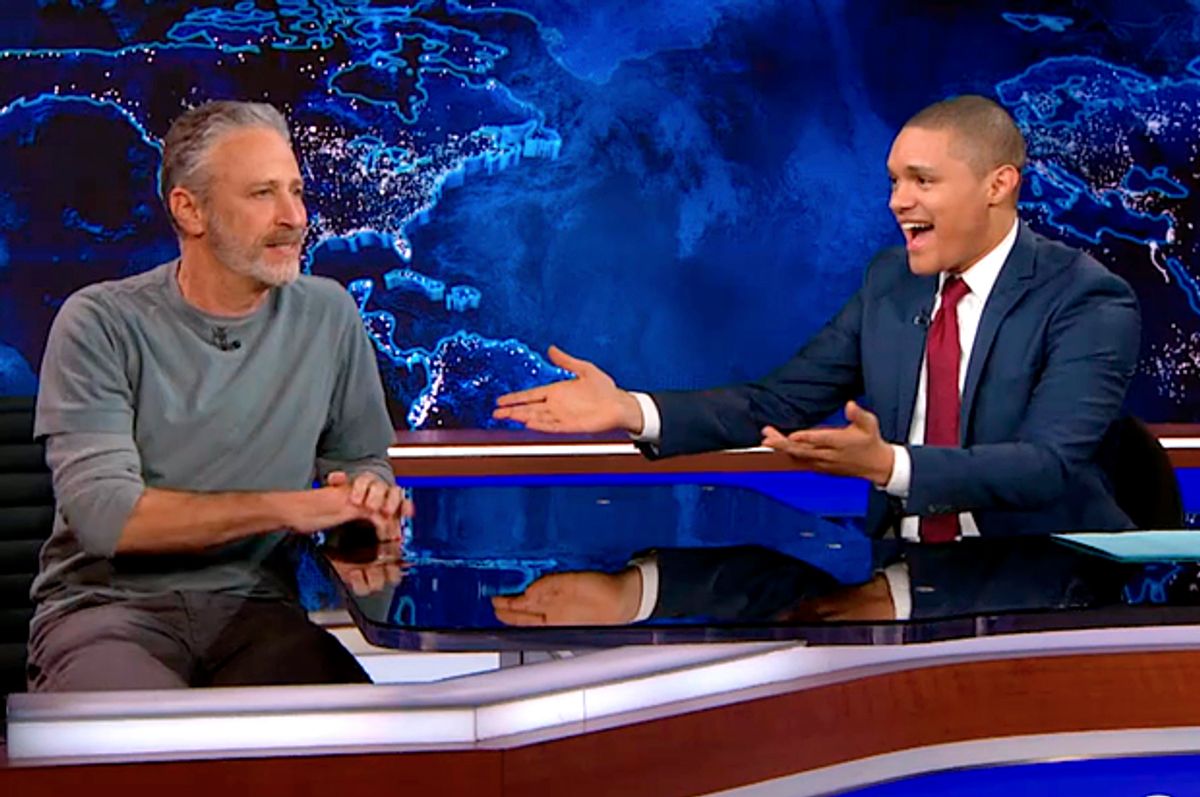 Last night on “The Daily Show,” host Trevor Noah was joined by an unexpected and—to judge by the audience’s reaction—very welcome guest: Jon Stewart. The former host stopped by “The Daily Show” to do a nearly episode-length push for a bill he’s supporting, the Zadroga Act, which would extend benefits for 9/11 first responders who have suffered health problems as a direct result of being exposed to Ground Zero. Stewart’s outrage is understandable, and the cause is in all likelihood the least controversial one currently facing Congress. But of course, politics has gotten in the way; Stewart singled out Senate Majority Leader Mitch McConnell as the inhumane mastermind gutting the bill for “purely political reasons.”

The episode went well—skewing a little more serious than “The Daily Show” typically does, but not without payoff. I imagine most viewers left feeling they’d learned something, which is Stewart’s hallmark. Noah and Stewart have a nice onstage banter, if not a seamless one—and for once, Stewart got to play the outsize correspondent, not the straight-faced foil in the anchor’s seat.

But aside from the quality of the episode, Stewart’s presence on the show is inexplicable. He is still an executive producer, true, but the comedian just signed a four-year deal with HBO to make short-form videos; what is he doing making segments back on Comedy Central? Even if HBO wasn’t ready to launch Stewart’s brand online, an op-ed by Stewart would make it to the New York Times opinion page in a heartbeat. So why return to “The Daily Show?” It’s a bit too soon for a comeback tour, just four months after his much-vaunted final episode. And how does Stewart returning reflect on the still-green new host, Trevor Noah, after a rather shaky few months in the spotlight?

Whether they meant it or not, there is an awkward implied comparison that comes into play when Stewart is put next to Noah on his once-hallowed stage. No matter what you might think of Noah, it’s not entirely fair to him; Stewart is everyone’s favorite all-star, while rookie Noah just faced a bizarre staff rebellion last week. Stewart’s returning to assert himself at “The Daily Show” either makes Noah looks like he needs the injection of credibility from America’s most trusted satirist—or that “The Daily Show” is well aware that Noah isn’t up to Stewart’s standard, and is bringing the former host in to spike the ratings. It’s likely not so diabolical—after all, Noah and Stewart apparently have a good personal relationship, and it may all have been as simple as doing a favor for a friend who happens to be beloved by the audience—but it’s hard to deny that it looks weird.

And the way things look have substantial significance, especially for the broadly defined, emotionally resonant position of “Daily Show” anchor. Noah’s youth and relative inexperience already made him a difficult sell to an audience who looked to Stewart as a moral authority. Now it seems that “The Daily Show” has given up on the idea of selling Noah as a similar authority—and instead will rely on occasional visits by Jon Stewart to keep audiences satisfied. That’s a sad state of affairs for Noah: After just a few months of trying to convince an audience to trust him, now “The Daily Show”’s audience can be hooked with the hope that Stewart might show up on an episode.

Who knows: Maybe that will work. Filling Jon Stewart’s role is an impossible task, because Stewart succeeded based on trust and reputation. Another person, no matter how experienced or seasoned, could not replicate that familiar bond. But perhaps Stewart’s semi-presence will encourage viewers to invest in, and eventually trust Noah; as an executive producer, Stewart’s stands to profit if “The Daily Show” under Noah can become the juggernaut it was under Stewart.

Whatever does happen here, it is clear that the puzzle of replacing Jon Stewart is not an easily solved one. The host, the writers, and the audience have all separately and jointly required a lot of handholding to get through this transition, and right now, there’s no guarantee that the transition is even working.