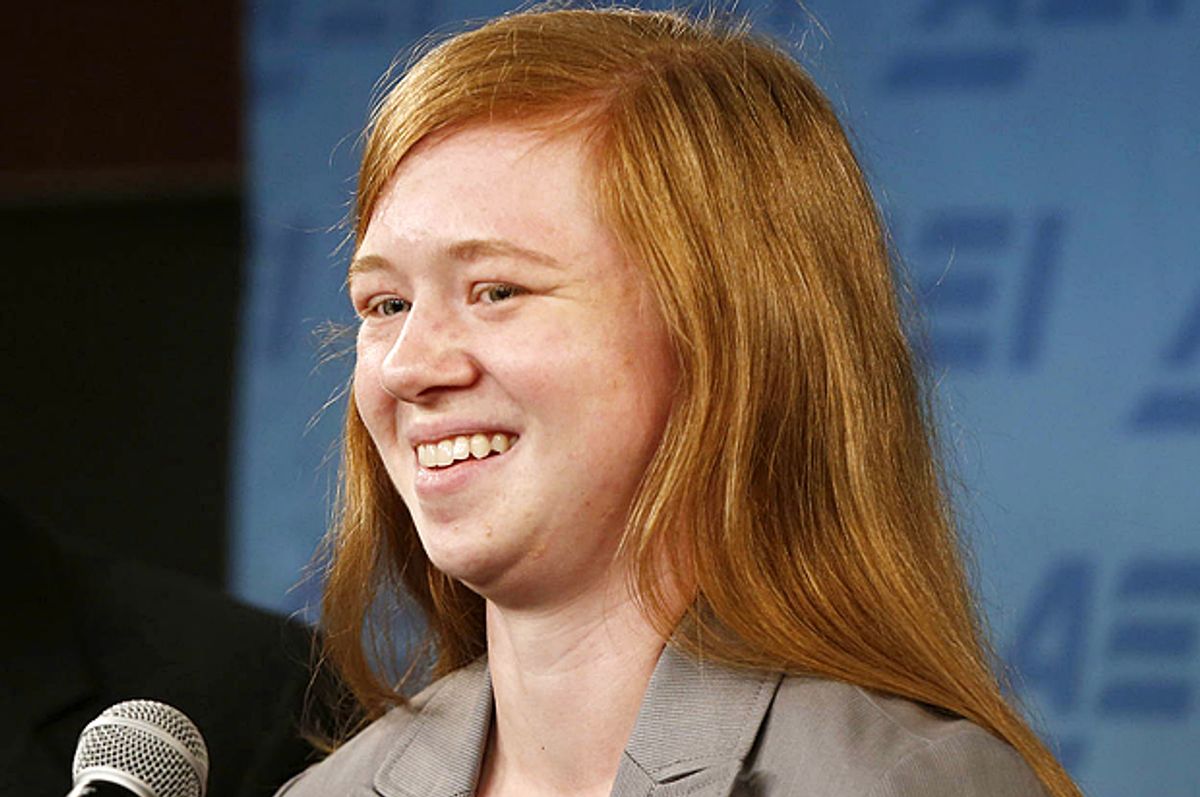 Wednesday, the Supreme Court heard arguments in what is easily the most baffling case it's going to hear this session, yet another attack on affirmative action policies at state universities, in this case the University of Texas at Austin. If ever there was a case that has no business in front of the high court, it is this one. The suit is a nuisance suit, it's poorly argued, it's disingenuous, it's been heard before and, to make everything even more bizarre, the plaintiff's claim to injury is demonstrably untrue. This is a case that should have been laughed out of court years ago, but instead, this is the second time — second time! — it's being presented in front of the Supreme Court.

At stake is the claim made by Abigail Fisher, now 25, who hails from a wealthy suburb of Houston called Sugar Land, that she was deprived of her rightful admission at UT Austin because, in her view, some person of color who didn't deserve it stole it from her.

Throughout her now seven-year campaign to make the school pay for not letting her in, Fisher has never been able to produce any evidence that the school tossed her application to make room for a less qualified minority applicant. That's because, as UT Austin has maintained throughout this ordeal, Fisher was never getting in to their school. Fisher's GPA and SAT scores weren't high enough, and she didn't have enough external accomplishments to convince the school to give her a shot otherwise. As Pro Publica explained at the time:

It's true that the university, for whatever reason, offered provisional admission to some students with lower test scores and grades than Fisher. Five of those students were black or Latino. Forty-two were white.

Neither Fisher nor Blum mentioned those 42 applicants in interviews. Nor did they acknowledge the 168 black and Latino students with grades as good as or better than Fisher's who were also denied entry into the university that year.

Fisher's case only makes sense if you assume that people of color are inherently less worthy than white people. How else do you justify an argument that assumes that every white person should have been given a shot before minority students do?

This assumption of the inherent superiority of white people, even above those people of color who have more appealing applications, was reflected in Antonin Scalia's remarks during today's case.

From transcript, what Scalia said today on whether black people would be better served at "less advanced" schools pic.twitter.com/ikYGnjqM5p

Instead of telling her where to shove it, the Supreme Court sent Fisher's case back to the appeals court. Now she and her lawyers are back again. This time, they've tweaked their argument a bit, trying to argue that diversity itself is an illegitimate goal for schools and, to add a bit of extra nastiness sauce to it, they're claiming that diversity is bad for students of color.

In other words, Fisher and her lawyers are concern-trolling the Supreme Court.

Most of UT Austin's admissions are on the basis of high school class standing — about 80 percent of its class in the year that Fisher applied. But the other 20 percent are determined in a holistic fashion, by looking at grades, extracurricular activities, test scores, writing samples, the usual stuff. Because of the school's commitment to diversity, race and class background is also taken into consideration. Someone who shows potential but faced some obstacles gets a closer look than someone who hasn't had similar obstacles.

When you read about this case, it quickly becomes self-evident why the admissions committee didn't think Fisher had some hidden potential that wasn't reflected in her grades. Fisher, however, has decided her unparalleled genius is going unnoticed because of the notorious racism against white people. But since that argument hasn't gotten her very far, her lawyer, Edward Blum, is now trying a different tactic to argue that schools should admit mediocre white people over talented students of color: His claim is that  giving students of color an opportunity somehow hurts them.

"Rigorous judicial review,” Blum's new petition argues, “would have revealed that UT’s ‘qualitative’ diversity interest is in fact illegitimate.  It depends on the assumption that, as a group, minorities admitted through the Top Ten Percent Law are inherently limited in their ability to contribute to the university’s vision of a diverse student body, merely because many come from majority-minority communities."

Translated from legalese to English: It's supposedly racist to let students of color with middling grades  into UT Austin, because you're assuming they can't do better. It's a particularly rich argument, considering that Fisher is arguing that she should have been given the first shot, before any students of color, at getting in with middling grades.

But the school is arguing that they should have a right to evaluate a student beyond grades, at least in the 20 percent of cases at stake here. Students who get in with less than stellar grades (most of whom are white, we must remember) usually do so by making a case that they have potential. Taking someone's racial background and the obstacles they faced from it is part of making that case.

Blum's argument says more about his and Fisher's racial prejudices than it does about the school. It's they who assume that non-whites students must have been given a leg up because they couldn't hack it on their own. But when it comes to Fisher, they employ a different assumption, believing, against all evidence to the contrary, that she must be good enough to deserve a spot. There's a word for casually assuming the worst about people of color while assuming the best, even in the face of contrary evidence, of white people. Needless to say, it's not a word commonly associated with doing well by people of color.

The "diversity is bad for students of color" argument is clearly disingenuous, but it's really just cover for the larger argument that Blum is making, which is that universities have no interest in having diverse student bodies. Unfortunately, this claim, even without the doing-it-for-the-black-kids justification, has a warm audience with the conservative justices. As the Wall Street Journal liveblog demonstrates, Samuel Alito was arguing from the bench that as long as you have some black students, then you don't really need to work to make sure that the student body's diversity is reflexive of the country at large.

John Roberts got snotty, asking, "“What ‘unique perspective’ does a minority student bring to a physics class?” It's interesting how he assumes the purpose in having black students is not to educate those students, but only if they can bring a "unique perspective" for the benefit of white students.

But of course, the purpose of universities, especially land grant colleges like UT Austin, is not just about giving white people a good college experience. It's about improving society, as a whole. And that whole includes black people, who are currently underrepresented in higher education. UT Austin found a way to balance its duty to provide education to improve lives for people, all kinds of people, with their duty to maintain a level of educational excellence. Let's hope the Supreme Court doesn't chuck that in favor of a system whose only purpose is to elevate white mediocre students like Abigail Fisher over promising students of color.