Jeb's tax deceit: A new report pulls the rug out from underneath GOP tax policy 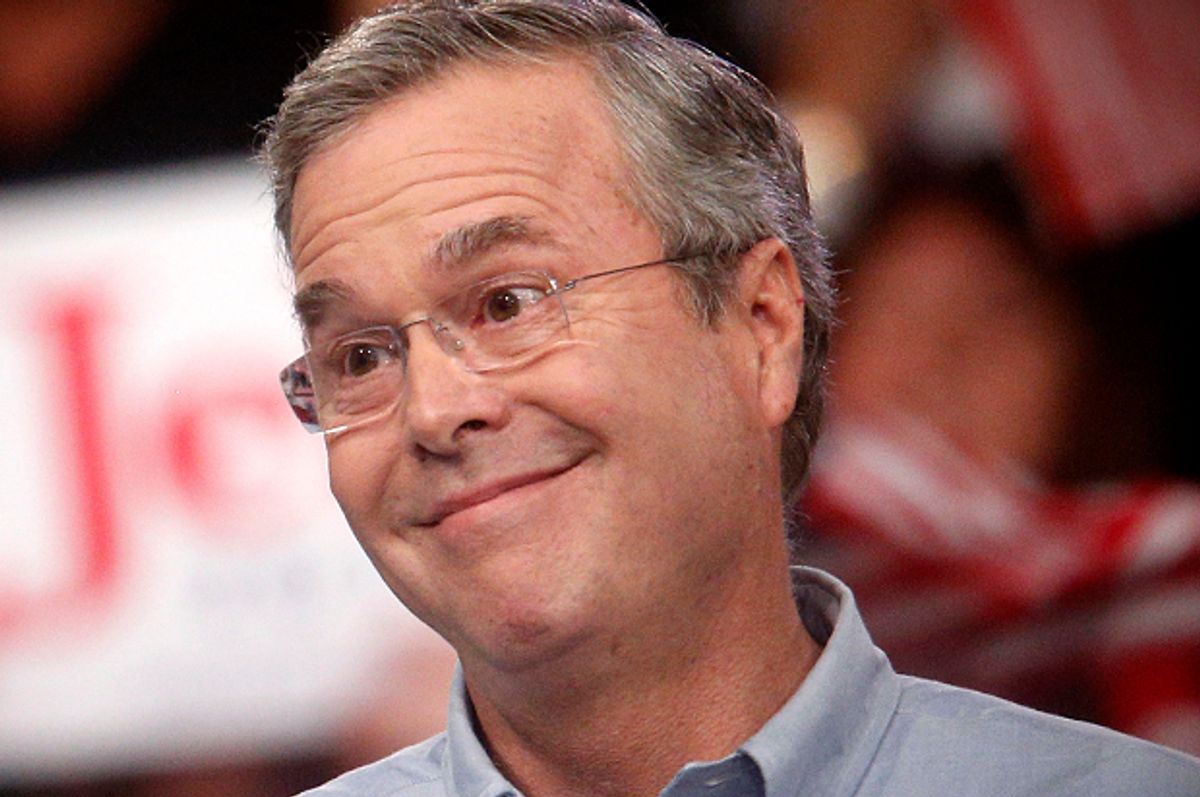 The spectacle of Donald Trump’s proto-fascist skid into the depths of political insanity has dominated coverage of the 2016 Republican presidential primary and focused everyone on the question of how (or whether) the party will survive the damage being wrought by its front-runner. This is a fair question, given that nobody within the party has figured out how to neutralize him and several other candidates vying for the nomination are trying to simultaneously distance themselves from Trump while positioning themselves to pick up his voters when (if) he finally flames out. But this sustained focus has the unfortunate effect of distracting from the party’s other seemingly intractable problems, which are far more significant in terms of their policy impact.

So let’s step back a moment from Trump and take a look at Jeb Bush, who, per the latest polling, is losing very badly. From the beginning, Jeb’s campaign has been based on one simple economic message: Through tax cuts and reductions in government spending, he’ll bump GDP growth up to a sustained 4 percent, while also balancing the budget and reducing the national debt. There will be jobs everywhere and prosperity will drip from the heavens, like what happened in Florida while Jeb was governor (just disregard the massive housing bubble that fueled the state’s economic growth and then left it in ruin when it popped shortly after Jeb left office).

These bold promises are based in large part on Jeb’s tax plan: an aggressive package of tax cuts that would slash personal income taxes, corporate taxes and capital gains taxes; eliminate the estate tax and the alternative minimum tax; boost the earned income tax credit; and get rid of several different deductions. “I know that enacting these policies works because I’ve done it before,” Jeb wrote in his Wall Street Journal Op-Ed laying out the proposal.

Well, according to a new analysis from the Tax Policy Center: no, these policies won’t work. At least, they won’t do what Jeb says they will. Per the TPC, Jeb’s plan would “boost deficits by $6.8 trillion between 2016 and 2026 and overwhelmingly benefit the highest income taxpayers.” And when they say the rich benefit “overwhelmingly,” you better believe they mean it:

Households at all income levels would receive tax cuts, but the largest cuts, both in terms of dollars and as a percentage of income, would accrue at the highest income levels. The top 20.0 percent of tax units would receive an average tax cut of almost $14,000, or 5.4 percent of aftertax income. The highest-income 1.0 percent would average a $167,000 tax cut (almost 11 percent of income), and the top 0.1 percent would get a tax cut worth over $800,000 per return, nearly 12 percent of after-tax income.

Right here is where Jeb acolytes, such as they exist, would argue that all this enthusiastic tax-cuttery will generate intense economic growth which will boost tax revenues and offset – if not eliminate – the projected revenue losses. This is magical thinking that isn’t really based on any concrete evidence, as TPC notes: “Examination of particular historical examples of tax reform… suggest little impact of taxes on growth.” Rather, making up the revenue losses and balancing the budget, as Jeb promises he will, “would require unprecedented spending cuts,” according to the TPC. Jeb’s deficits are so large that there actually isn’t enough discretionary spending to eliminate to make them up, so “a fiscally responsible plan would require substantial cuts in entitlement programs such as Social Security, Medicare, and Medicaid.” To make his tax plan work, Jeb would have to borrow vast amounts of money (which he’s ruled out) or slash spending on the poor, thus exacerbating the already regressive nature of the plan.

So the Jeb plan is deficits and debt stretching on to infinity while government revenues are redistributed up the economic ladder to the wealthy. That would be bad news for Jeb if he stood a realistic chance of winning, but the real kicker here is that pretty much every Republican candidate has some version of this plan.

In one way or another they’re all promising huge, regressive tax cuts paired with vague promises of spending cuts and all papered over with voodoo mathematics to make it seem like the numbers add up. At the same time that they’re lying to cover up these huge deficits, they’re also warning about the dangers of the debt. Some of them propose massive increases to military spending while also promising to balance the budget. This policy incoherence is at the heart of the Republican economic agenda, and it would be carried into the White House no matter who the Republican nominee is.