Let's have a war on football: Greed, brain damage, tax breaks to billionaires and the debate we need to have about the NFL 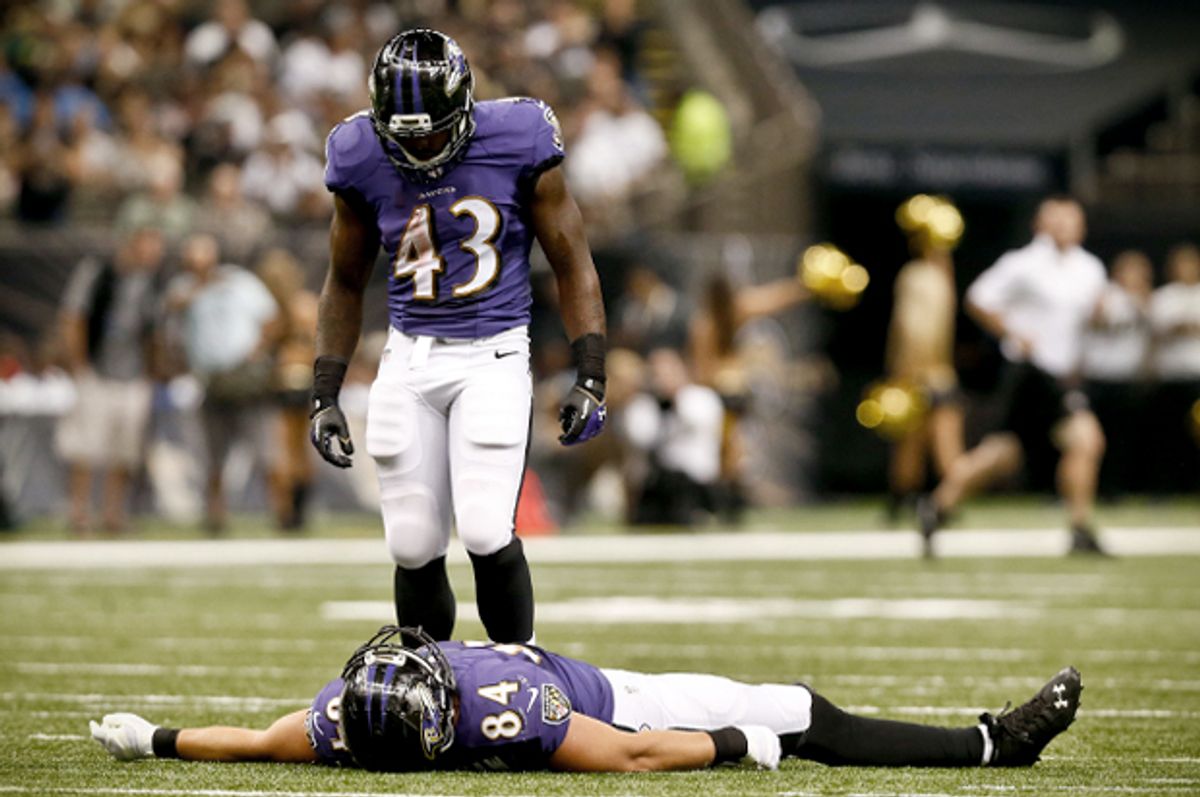 The war on football is real. Not sure source but concussion alarmists are loving it. Liberal media loves it. Doesn’t matter. It’s real.

Kanell was responding to an editorial in the New York Times by Dr. Bennett Omalu, the forensic pathologist who first identified chronic traumatic encephalopathy (CTE),  a degenerative brain illness that has become alarmingly prevalent in football players.

Omalu is the subject of the forthcoming Will Smith film “Concussion,” which tells the story of the National Football League’s concerted effort to suppress the medical research that links our national pastime and brain damage.

Omalu’s editorial, titled “Don’t Let Kids Play Football,” argues, rather intuitively, that there should be an age of consent — he suggests 18 — for young people who want to engage in the sport, given that it can cause irreversible brain damage.

It is probably worth noting at this point that 13 high school football players have died this year alone from injuries sustained either in games or practice. Extend that back a decade and the number climbs to nearly 100.

Kanell’s own father is quite familiar with the injuries players can sustain on the gridiron. He’s been the Miami Dolphins’ team doctor for 25 years. Which is why he did not allow young Danny to play football until he was 16.

Kanell was forced to admit this fact, but went on to make the following, uh, clarification on Twitter: Not for concussions but because it’s a dangerous sport.

Technically then, for those keeping score, Danny Kanell’s own father is a part of the insidious War on Football.

But Kanell didn’t just thumb out one ignorant tweet about football and leave it at that. He went on a full-throttle rampage in which he dismissed the vast body of medical science around the game as “sensational reporting” and tried to bait various bemused reporters into admitting they want to ban the game.

Richard Deitsch, of Sports Illustrated, was measured in his response. Define liberal media for your context here, Danny? Is ESPN part of it? SI? Fox? All have reported on concussions. Doug Gottlieb, the host of a CBS Radio show, was less so: You are starting to sound like “I didn’t get lung cancer from smoking” guy.

Kanell is right in one sense: The medical science concerning football’s dangers is not entirely clear. But it’s all headed in one direction. This is why the NFL’s own actuaries estimate that up to 30 percent of former players will suffer long-term brain damage.

Unless, of course, the NFL itself is (gasp!) part of the War on Football.

But Kanell’s outburst represents something more profound than an ex-jock belching out troll bait. His mentality is precisely the same as the for-profit demagogues who bleat about the “War on Christmas” or the “War on Gun Rights.”

It’s privileged white men, for the most part, who cry like babies because some egghead — usually a doctor or a scientist — dares to apply a functioning conscience to their personal indulgences. In the absence of any coherent argument, the speaker inevitably projects his or her own malicious hypocrisy onto the world at large.

Donald Trump uses this same special sauce (two parts grievance, one part bile) over and over again to incite his followers. He got the recipe from Fox News, who got it from Nixon who got it from Joseph McCarthy. And so on.

There’s a kind of triumphant paranoia to this way of thinking, a psychotic sense of entitlement that attempts to dress violent pleasures in the robes of moralism, and to frame aggression as self-defense. What Kanell is really objecting to, in the end, are the moral burdens of enlightenment. Pushed to its extreme, this mind-set is what allows those who kill innocents to see themselves as martyrs.

Kanell himself may have no idea what I’m talking about at this point, but his voice is only the first of many that we’ll hear, as "Concussion" hits the multiplexes.

And, in a sense, we should thank him for his candor.

His rant represents the unfiltered id of this country’s hardcore football fans, who, as they grow more besieged by evidence of the game’s corruptions, will grow increasingly hysterical in denying them.

Football is not under attack in this country. Just the opposite. It remains America’s designated sacred cow, a violent tribal ritual that is sold to its fans as wholesome entertainment.

The Football Industrial Complex in this country enjoys tax breaks, anti-trust exemptions, corporate partnerships, and a general level of moral negligence that is unparalleled in our culture. It has infiltrated our educational system so completely that we think nothing of the fact that our tax dollars now subsidize stadiums and celebrity coaches rather than teachers and textbooks.

Perhaps the simplest way to think about all this is to consider what would happen to any other American business in which the owners themselves admitted in federal court that their workplace causes brain damage in nearly a third of its workers.

Let’s be honest: It would be shut down yesterday. The same could be said of any high school extracurricular that routinely resulted in student deaths.

And that’s before we even get to the toxic values of the game: its nihilistic greed, celebration of violence, medieval gender roles, reflexive homophobia, etc.

The problem, ultimately, isn’t that there’s a war on football. It’s that guys like Danny Kanell can make claims like this and never have to defend them.

Like Donald Trump, Kanell lives comfortably within an echo chamber of propaganda. From within, he gets to throw rocks at his imaginary persecutors. But he doesn’t have the guts to debate the morality of football with an actual human being in the clear light of day.

Or maybe he does.

So Danny, if you’re out there and reading this (or one of your fans would care to pass this along) please do respond to my message on Twitter, the one in which I volunteered to appear on your radio show to debate “the War on Football.”

My book, "Against Football," doesn’t recommend banning football, I’m afraid. All I want is for Americans to confront the sport’s dark underside.

But for a guy like you, that’s probably tantamount to a declaration of war. So if you need an imaginary enemy for your imaginary war, I’m your guy.

You know where to reach me: @stevealmondjoy.