My daughter is not Tashfeen Malik

I don’t know what is right for each individual Muslim woman in America; I only know I want my daughter to be safe 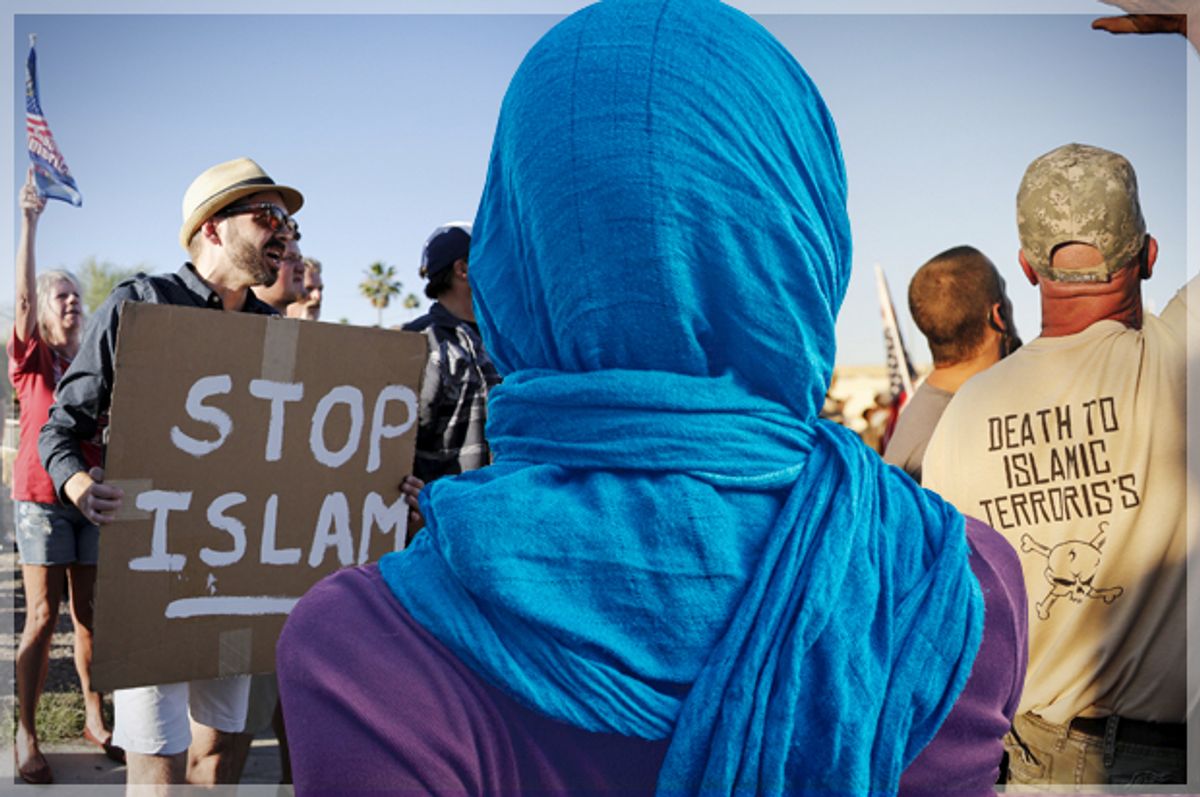 My teenage daughter’s headscarf, or hijab as she calls it, announces her religious identity as a Muslim. She has had plenty of harassment by strangers because of her Muslim appearance, but has not experienced physical harm, unlike the sixth grade student in New York city’s PS 89 school who was physically attacked by three boys who called her “ISIS,” or the London teen whose video of being brutally attacked from behind as she walked on a sidewalk was posted on the Internet. But my daughter is getting ready to leave for college soon, and I am afraid for her.

In today’s America, TV shows like "Homeland" propagate wildly popular caricatures of Muslims as lurking threats, and well-funded Islamophobic “think tanks” abound. Right-wing politicians have made Muslim bashing a competitive spectator sport. As made clear through various polls, islamophobic statements carry little political price within the conservative base, so their leadership has done away with the use of code. Their standard mass shooting public messages of “thoughts and prayers” quickly gave way to declarations of war on Islam when the identity of the San Bernardino shooters was revealed, even before the couple’s religious extremism came to light. And presidential hopefuls are not alone. Jerry Falwell Jr. encouraged the graduates of his Liberty College to carry concealed guns as means of ending “those Muslims before they walked in.” Even President Obama in his Oval office address after the San Bernardino massacre called on Muslim communities to do more to root out extremism, as if the couple’s intentions were known to their community and it was the community’s inaction that caused the carnage. It is, then, no surprise that there has been a surge in hate incidents against Muslim women in hijab who are easily identified because of that telltale piece of cloth on their heads.

While mass casualty attacks in America have unfortunately become a regular occurrence, women rarely commit these acts. Tashfeen Malik, however, was not the first. In June 2014, Amanda Miller and her husband, Jared, slaughtered two police officers at a pizzeria, then draped a yellow flag on their bodies, along with a swastika-adorned manifesto. They then burst into a Wal-Mart where they killed a civilian before killing each other following a shootout with police. They are believed to have been inspired by the Sovereign Citizen’s Movement, described by the Southern Poverty Law Center as a fast-growing subculture with anti-government beliefs. And yet I doubt many white mothers worried their daughters' safety was threatened by a violent backlash in the months that followed.

One of the unspoken corollaries of being a member of a minority is that one is judged by the acts of the community’s outliers. While the Oklahoma City bombing, the Newtown massacre or the Charleston church shooting did not bring a spotlight on white men of America, because we understood the attacks to be the acts of outliers, Muslim Americans have not experienced such benevolent treatment. Though the hate crimes directed at Muslims are committed by low-level, often marginal characters, the rhetoric blaming the community for individual acts is by no means a fringe phenomenon. Whenever Muslim individuals have perpetrated violent acts toward Western targets in the United States or abroad, a chorus of TV pundits and politicians demand in earnest that all Muslims take responsibility for the actions of the terrorists, and do "something" about it. Notwithstanding that many American Muslims opposed the Iraq War, which arguably facilitated the birth of ISIS, American Muslim civilians are expected to now take responsibility for the elimination of ISIS in America. This expectation implies that the local cardiologist, grocery store owner and stay-at-home mother in their mosque basements, and not adequate gun control, will somehow prevent all future acts of mass shooting by Muslims. My teenage daughter, with her headscarf, is thus seen as not doing enough to prevent the violent acts of people she will never know.

As Muslims in America are being assigned collective responsibility for the violence of a few, looking Muslim in America has become increasingly dangerous since 9/11. Sikhs have been targeted for hate crimes because of their beards and turbans; Muslims like the dental student Deah Barakat and his hijab-clad wife and sister were shot dead in their home. Tashfeen Malik's hijab-clad picture has become ubiquitous, and to some, the face of terror is now a brown woman in a hijab.

Among my social media contacts, Muslim women are in a frenzy as they exchange ideas about what to do with their headscarves in public. Their ideas range from disguise, by wearing winter hats at all time, to defiance, by saying that they can’t be responsible for the acts of someone they have never met, to the fatalism of accepting that God’s will shall be done. Some are planning to take off their hijabs at least temporarily until “things settle down," erasing their Muslim identity in public. Others have compared their experience with the headscarf to the experience of Japanese Americans after Pearl Harbor, who could not take off their identities in the same way as one can take off a piece of cloth.

I don’t know what is right for each individual Muslim woman; I only know I want my daughter to be safe. For that, leaders and the media need to examine their hateful speech and their false assumption of collective responsibility. My daughter, and the other millions of Muslim American women, did not participate in the San Bernardino massacre. I want people to remember that Tashfeen Malik, the woman who is responsible for that act, is dead.