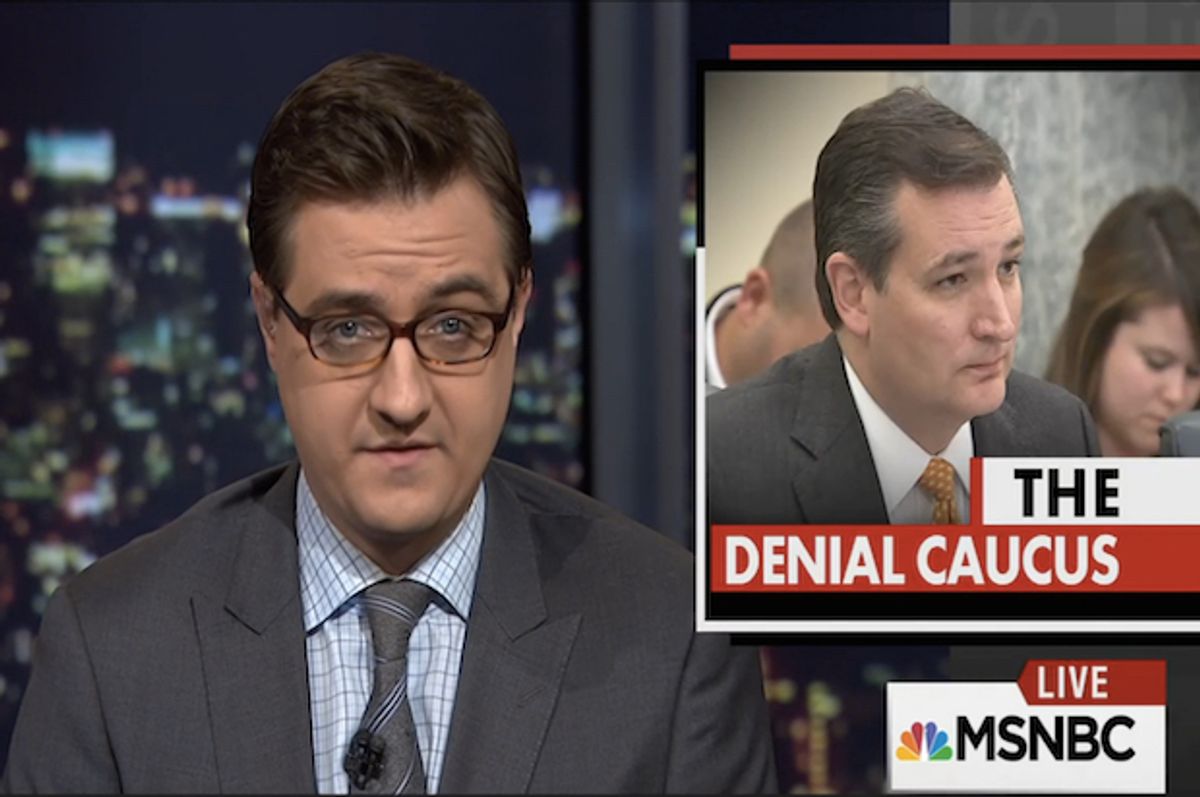 Ted Cruz is the chair of the Senate subcommittee on Space, Science, and Competitiveness and decided to take a break from the campaign trail on Tuesday to convene his subcommittee to get to the bottom of climate change and determine wether concerns over its impact are guided by "data or dogma," as more than 150 world leaders gather for a historic climate change summit in Paris.

But, of course, Cruz, like nearly all of his fellow Republicans on the Hill and the campaign trail, is a climate denier and made it very clear, early on during Tuesday's stunt hearing, that his mind is already made up on the issue. “There has been no significant global warming in the past 18 years,” the Texas Senator said, according to the Dallas Morning News. “Global warming alarmists don’t like these data. They are inconvenient truths, as Al Gore might say. But facts and evidence matters.”

Cruz would go on to compare the near universal scientific consensus on climate change to “the Inquisition,” arguing that as the son of two mathematicians, it was his solemn duty to fight the “language of the Roman inquisitors” and defend climate deniers who have been unfairly branded “heretics.”

In the past, Cruz has said that “climate change is not science. It’s religion,” during an interview with right-wing bloviator Glenn Beck and now Cruz is using his position as chairman of the subcommittee on science to grant his talk radio buddies an opportunity to bloviate as a matter of Congressional record.

Cruz even boasted about his slate of experts, retweeting a video of Mark Steyn's testimony accusing climate scientist of "misrepresenting credentials" in order to legitimize a hoax. Steyn, of course, is a right-wing commentator and frequent guest host for the "Rush Limbaugh Show." The video of Steyn's testimony that Cruz shared with his Twitter followers links back to a website called JunkScience.com:

"Do hearings like this one do actual tangible harm or are they just a sideshow," Hayes asked his guest, Democratic Michigan Senator Gary Peters, mentioning past criticisms that other congressional hearings have been orchestrated by Republicans as a means to harass climate scientists.

Peters dismissed Cruz's stunt as a "sideshow," encouraging lawmakers to not get sidetracked by his antics but instead to focus on "trying to solve [climate change] as opposed to trying to deny its existence."