The blinding irrelevance of Time magazine: Why Angela Merkel as "Person of the Year" just proves its love affair with power

While Merkel isn't the worst choice the magazine could have made, the result is nonetheless tepid and predictable 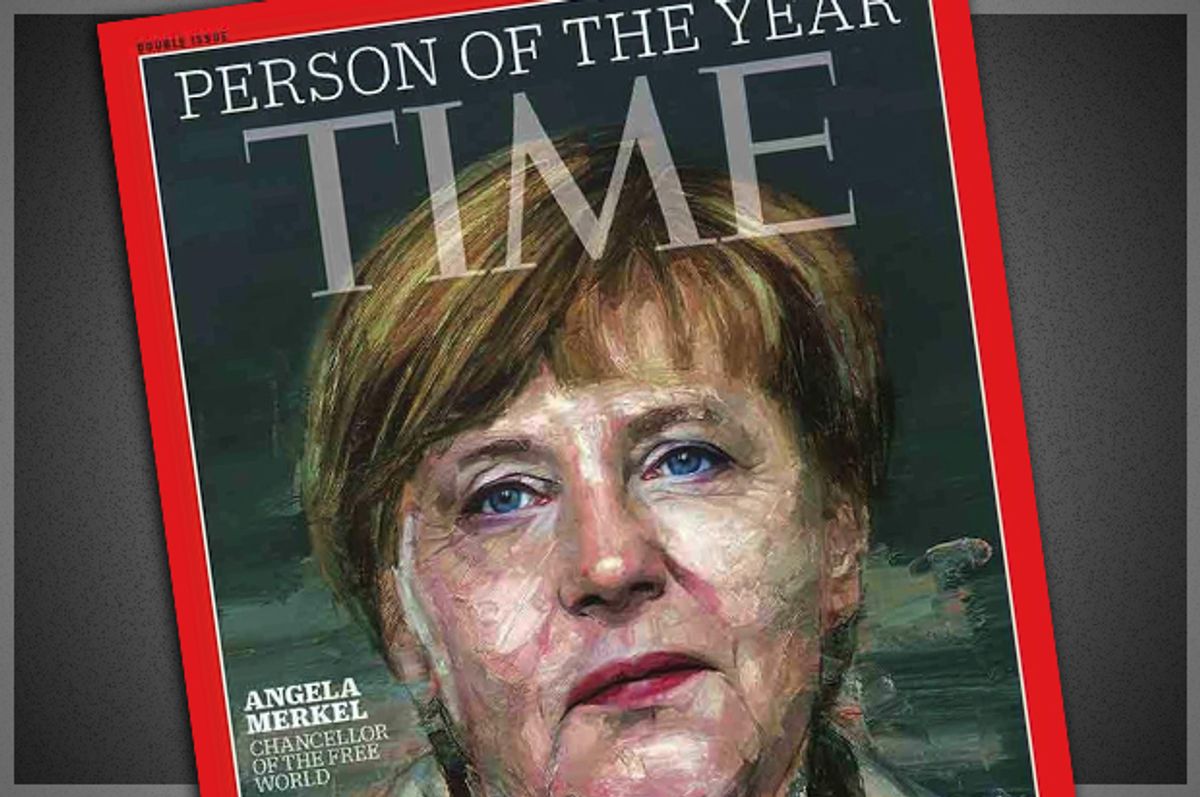 Angela Merkel didn't get the Nobel Peace Prize in 2015, but Time magazine has ensured that the Chancellor of Germany isn't going to end the year empty-handed. Merkel has been named the 2015 Person of the Year—the annual honorific that, for whatever reason, still seems to matter a great deal. (There's a whole other piece to be written about why we're even that interested in what Time thinks about the state of the planet in 2015, but that's for another day.)

Editor Nancy Gibbs wrote that Merkel's acceptance of the refugees who are still pouring into Germany was the main reason that she had been selected. She hailed Merkel "for asking more of her country than most politicians would dare, for standing firm against tyranny as well as expedience and for providing steadfast moral leadership in a world where it is in short supply." An accompanying article expanded on this point.

Merkel's insistence that refugees should be allowed into Germany—one she has faced no small amount of political pressure for—is certainly laudable, especially as the U.S. is dealing with a groundswell of racist hysteria around refugees who haven't even come here. It's also, of course, good that Time has named a woman as its Person of the Year for the first time—and this is really true–since 1986. These things are important. Yet the choice reflects both Time's unerring commitment to worshiping the powerful and to choosing the blandly inspiring over the truly interesting.

You don't have to take my word on the first point. Time's Radhika Jones, in explaining why so few women have been named "Person of the Year," wrote that "the label of Person of the Year tends to favor people with institutional power." At least Time is being upfront about its priorities there.

(And, not for nothing, but that closeness to power is reflected in the magazine's endorsement of the way Merkel dealt with the Greek euro crisis this year. There are those who would be rather less enthusiastic about the unyielding manner in which Merkel led Europe's highly anti-democratic response to the wishes of the elected Syriza government in Greece. Time, though, loves what it calls her "stern mien" and her toughness with "sunny Mediterranean nations that spent money they did not have.")

The second point, though, is equally important in sussing out why Time makes the choices it does. Although the magazine always insists that the recipient is the person who mattered most for good or for ill, it has a long history of avoiding potentially divisive figures. The past few years offer ample proof of this: Pope Francis was chosen over Edward Snowden in 2013, and "Ebola fighters" over Ferguson protesters and Vladimir Putin in 2014. This year, Merkel beat out ISIS chief Abu Bakr al Baghdadi and the Black Lives Matter protesters, among others. Both made an arguably bigger impact on America and the world than Merkel did, but both would surely have been more controversial picks.

Even if you think that Time should aim for the middle instead of taking a sharper stand, though, there's a glaring choice staring the magazine in the face that it failed to make. Instead of highlighting the benign white leader who welcomed the huddled masses into her country, why not choose the refugees themselves? These are ordinary people who have braved horror at home and abroad; who have been through hell and back; who have faced down tyrants and demagogues in both the Middle East and in Europe and, by proxy, in the United States; who have shaped the presidential race and global politics; and who, through it all, have insisted, by their actions, that they have a right to live in peace and that they are worthy of international protection. Now that would have been something even the coldest of cynics would find it possible to get behind.