These nuts really do dream of revolution: The right's frightening fantasy that blocks any action on guns

Until the right ends its worshipping, fetishized relationship with guns, we will never solve our violence problem 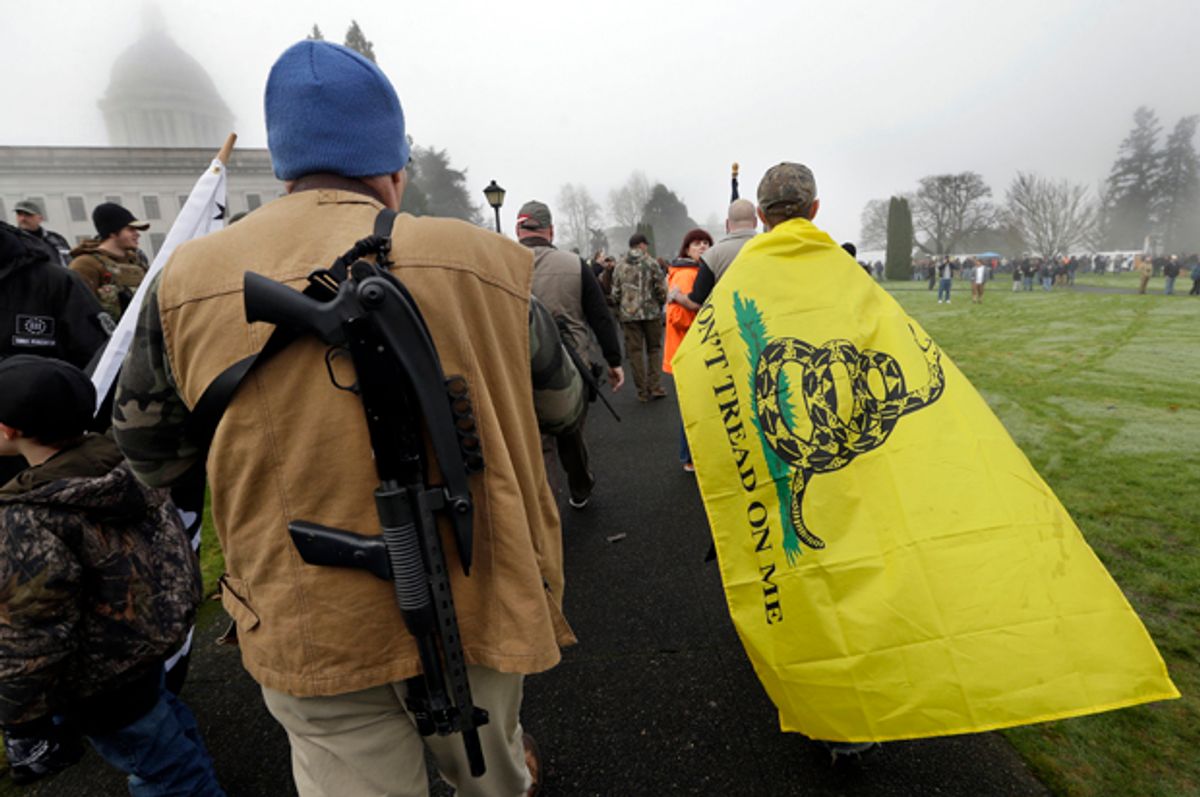 We accept few objects with as much blind devotion as guns. No matter the individual and social damage they cause, their general utility and good goes for the most part unquestioned. Even most strident calls for more gun restrictions still take part in this same logic: control them, even ban some of them, but don’t get rid of them entirely.

The day after Adam Lanza massacred 20 children and six adults at Sandy Hook Elementary School in Newtown, Connecticut, in 2012, Garry Wills rightly labeled our collective attachment to guns as a form of murderous idolatry. Like any god worth its salt, the gun promises safety, freedom and life, but only so long as it’s appeased through periodic sacrifice—and we have no shortage of sacrifices, it seems, as the recent act of terrorism in San Bernardino, California, reminds us. In a nod to the various illicit gods that populate biblical tradition, Wills suggest that the gun is “our Moloch.” As idols go, Moloch is, perhaps, second only to Mammon, though we all know that the two have a rather cozy relationship.

Gun advocates, of course, won’t explain their obeisance in those terms. It’s about rights, we constantly hear, the rights that our “founding fathers” rightly divined to grant us. “A well regulated Militia, being necessary to the security of a free State, the right of the people to keep and bear Arms, shall not be infringed,” the Second Amendment reads.

Fair enough, but appeals to “rights” don’t usually evoke such passion, at least among those who already have them (and, to be clear, it’s a whole different matter for those who don’t). I, along with most other citizens of this nation, appreciate the right to freedom of speech, but I don’t know too many people who regularly walk around shouting whatever they damn well please simply to assert that right.

So let me suggest the following. The attachment to guns is, as Wills and the Second Amendment both suggest, about freedom, but the freedom at issue is more fantasy than reality, an illusion perpetuated by the gun itself. Supporters of gun rights make numerous appeals to safety and individual security as a means to bolster their claims to gun ownership, but at the end of the day the main concern seems to lie in suspicion of and resistance to governmental authority.

That explains, in part, why gun and ammunition sales often spike even at the hint of stricter regulations. Gun shop owners in Wake County, North Carolina, for instance, reported increased sales after Obama’s recent Oval Office address. The owner of one of those shops framed the uptick in terms of government intrusion. “Some of the folks who are running for office absolutely want to get their hands on our guns, for sure, and restrict our gun rights,” he told the local news.

Indeed, those who oppose gun control regularly invoke the specter of “tyranny.” Wayne LaPierre, the outspoken CEO of the National Rifle Association, has said of the Second Amendment that “our Founding Fathers . . . had lived under the tyranny of King George and they wanted to make sure that these free people in this new country would never be subjugated again and have to live under tyranny.”  The “tyranny” that LaPierre evokes isn’t abstract, but is in his mind a present danger.

No one wants tyranny, of course—though it’s ironic that at least some gun advocates don’t seem to mind it in other forms. Nevertheless, does anyone really think that individual gun ownership poses any real challenge to perceived or real government overreach? The United States has one of the largest, most sophisticated militaries in the world, and as the comedian Jim Jeffries has reminded us, it’s at best wishful thinking to bring a gun to a drone fight. Indeed, many metropolitan police departments probably have enough machinery, gear, ammunition and bodies to overthrow a small country.

Freedom-loving gun owners could always, of course, band together, to mount a collective defense of liberty, in the event that our country turned despotic. But given the sheer size of the United States, its dispersed population, and the simple fact that Americans can’t seem to agree on anything of substance, that seems unlikely as well. Armed confrontation against a newly minted totalitarian regime in this country is more likely turn into an episode of "The Walking Dead," in which surviving groups of humans often fight against each other in isolated regions rather than broadly, in solidarity with each other.

All of this is not to support state power over-against individual and collective freedom, of course, but simply to state the reality: Gun ownership today poses no threat to governmental authority. Thinking that it does is nothing more than a fantasy, though an extremely powerful one.

Indeed—and this is the flip side of the fantasy of freedom condensed in the gun—if guns offer the illusion of freedom from state control, that illusion is actually necessary, to some extent, for the state to exert its control through other means. Otherwise put, so long as people feel that they have an ultimate out at the end of the barrel of a gun, that they can, ultimately, assert their freedom if desired, they are oddly less likely to buck the system in any serious way. It’s no accident, in this sense, that the legal gun owner also often considers him- or herself as “law-abiding,“ a “good citizen” and “patriotic.” Rather than an ever present threat to the powers that be, then, the gun is more of a bone offered to those who think they could overthrow the government, if need be. That bone, however, simultaneously limits them from doing so, making the Second Amendment a fairly effective ideological tool. Sure, there are always exceptions, though they are thankfully few. But even in such cases, it’s pointless to show up to a drone fight with a gun.

The unfortunate component of all of this, however, is that that fantasy doesn’t work in stopping the individual and mass acts of violence, murder and terrorism that have become all too common. That’s why we need to talk seriously about gun control, restrictions and outright bans, and act accordingly. To move in that direction, however, we need to cut through the fantasy that accounts for our fetishistic, even religious, attachment to guns.