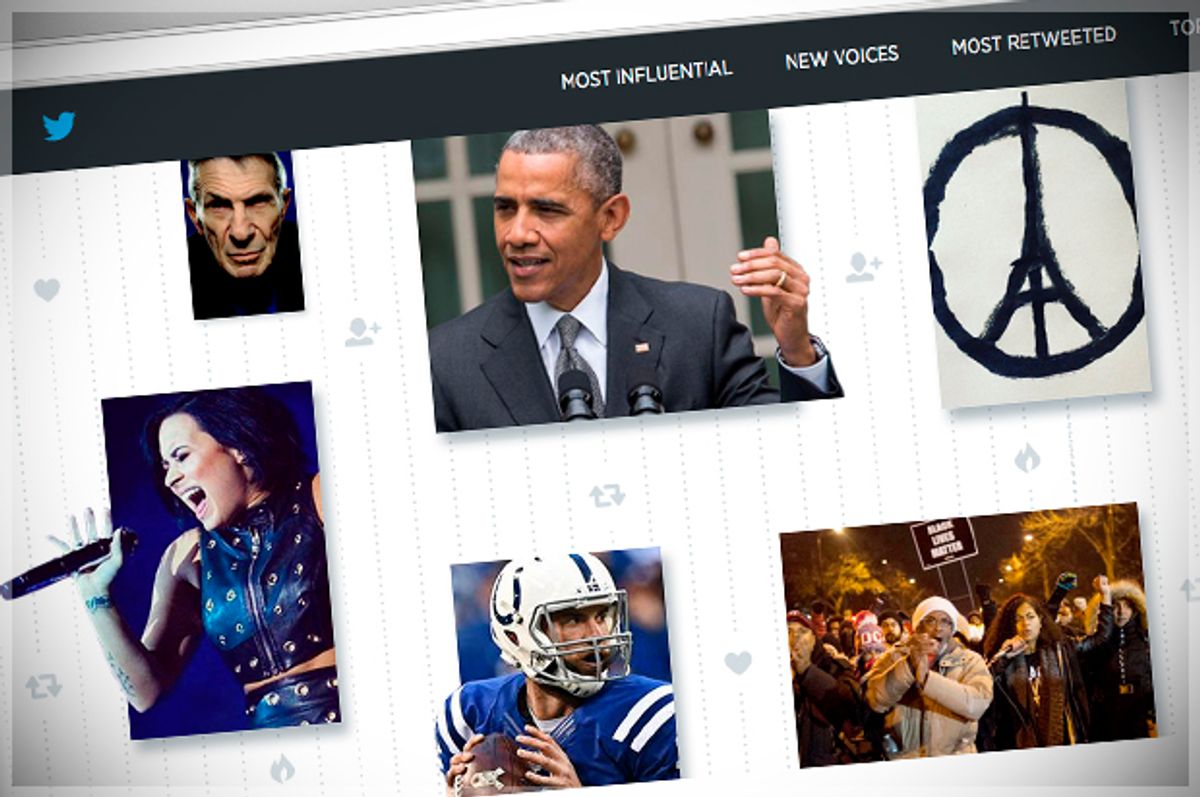 “If it’s happening in the world, it’s happening on Twitter.” The 2015 Year on Twitter provides a breezy overview of hashtags that dominated twelve months of online conversation, including #TheDress that Broke the Internet. Blue and black? White and gold? The fact that hardly anyone could see both Black/Blue and White/Gold was an inadvertent metaphor for the racial strife and social activism that also dominated the Twitterverse in 2015, with #BlackLivesMatter seeing the world one way, and #AllLivesMatter another, even as neither side paid enough attention to the fact that it was the image itself that was creating the illusion of difference. The medium is the message pretending to be the messenger.

In presenting itself as a neutral vehicle facilitating virtual conversations around the globe, the roundup never mentioned the dark underbelly of the Twitterverse, such as online harassment targeting women and girls severe enough to generate a scathing report issued by the United Nations, or the fact that one “stupid” tweet can upend a person’s a life, as discussed in Jon Ronson’s new book: “So You’ve Been Publicly Shamed.” The roundup also made no mention of its own year as a company: the 2015 year of Twitter. Notes Jon Fingas of Engadget: “Most of the year was defined by its perpetual troubles with both turning a profit and adding new users… It's safe to say that Twitter would rather forget most of its recent history.”

Apparently, #TwitterOutrage has never been a trending topic on Twitter, which mostly tells you that the wizard likes to hide behind the curtain. (Here is a great graph about Twitter outrage.) But Twitter also produced true surprises too, like the amazing #Zolastory, a story told in tweets as suspenseful as Scheherazade and as shocking as Quentin Tarantino. (The tweets are readable here via Storify. Its author, Aziah Wells, also known as Aziah King, @ _zolarmoon, literally became famous overnight.) Twitter also delivered unfiltered opinions by strong eclectic voices worth reading, including (but not limited to) Patton Oswalt, Phil Klay, Jeff Yang, Alexander Chee, Joyce Carol Oates, Roxane Gay, the Pope, and yes, Donald Trump, whose capacity to get their points across despite the constricted format showed that limits invite creativity as well.

As with all year-end roundups, the 2015 Year in Twitter lets us navel gaze upon our distracted online selves, giving us top ten lists based on number of tweets and somewhat nebulous factors identified as “global resonance” and “impact.” It leaves out the influence of media moguls such as Mark Zuckerberg and Rupert Murdoch, instead focusing our attention on mass popular entertainment—sports, film, TV, music, and those people famous for being famous. So if French philosopher Roland Barthes trended last month on the occasion of what would have been his 100th birthday because, as John Dugdale noted, “We’re faintly echoing him if we tweet sarcastic insights about Doctor Who or The X Factor,” Twitter’s snarky spiritual grandfather didn't make the 2015 top ten list.

Instead, we learn that the most influential hashtags were responses to global crises: #JeSuisCharlie and #PrayforParis in response to the terrorist attacks in France; #RefugeesWelcome in response to refugees seeking safe havens; #BlackLivesMatter as a rallying cry for social justice, and #LoveWins to celebrate gay marriage while continuing to advocate for LGBTQ rights. Hashtag activism has now become a way to change political conversations, even as the responsiveness of the medium impacts our comprehension, for good and for bad, of unthinkable events even as they unfold. Because terrorists love Twitter too. Who knew?

Edward Snowden joined Twitter. He does not rule the Twitterverse. With 26 million followers, the English-Irish boy band One Direction (#OneDirection) holds sway, with five of the ten most retweeted tweets coming from various members of the band, and the band itself owning the no. 1 spot in Music. Somehow, Britney Spears didn’t make the top ten in music, even though Huffington Post called her the 2015's “most influential woman on Twitter.” She has over 42 million followers.

I am not sure if much of this says very much about the state of the planet, except that boy bands are the planet’s new overlords, because cats have yet to discover Twitter. Back in February of this year, Scott Adams of "Dilbert" took the pragmatic approach when he wrote, “Twitter is my laboratory.” He then had only 1,718 followers, so he turned tweeting into an experiment regarding the best way to increase those numbers. His goal: to gain more followers. The point: to gain more followers.

His most popular tweet was: “I wish I were dumber so I could be more certain about my opinions. It looks fun.”

His least popular tweet: “Find out what works. Then do it. That’s my system. I’m always surprised it isn’t more popular.”

In other words, Twitter is strangely humorless about itself, even as its also shown an amazing, even brilliant capacity to troll others (who sometime deserve it.) What Adams’ experiment shows is that Twitter isn’t so much about what’s happening out in the world as what’s happening inside (outraged) heads. He’s now up to 13.5 thousand followers. His Twitter handle is @ScottAdamsSays. In the spirit of social media experimentation, wouldn’t it be interesting to see if he can’t become influential enough to make next year’s Twitter list? #Dilbert4President!