Who holds the cards at COP21?: Major players in Paris seem to agree carbon pricing is essential -- so why isn't it on the menu?

Support is growing for the need to price fossil fuels to fight climate change. But will it make the final accord? 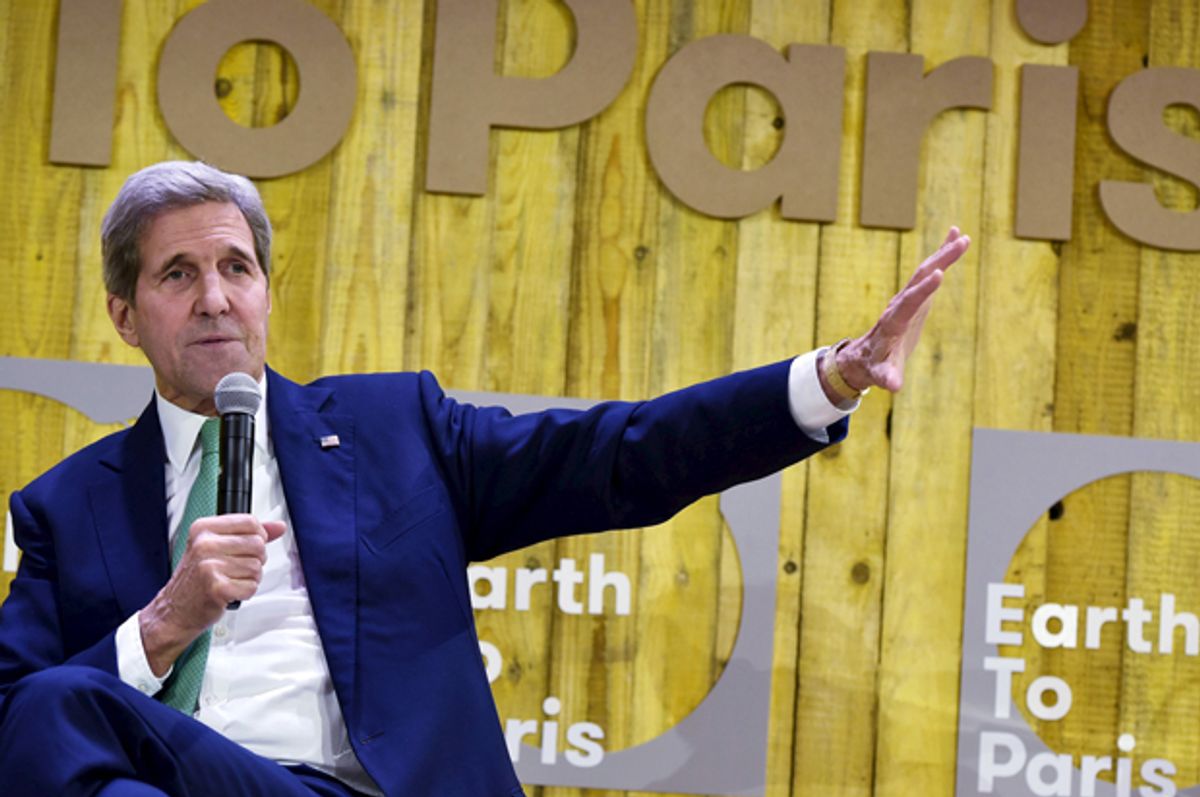 President Obama called it the “most eloquent way” to reduce carbon emissions. The German environment minister thinks it’s the “the most tasty piece of the cake of transformative climate solutions.” French President François Hollande believes it is “an essential tool to…reduce greenhouse gas emissions.”  The prime minister of Ethiopia said it could be an “opportunity for financing technology” to support climate action. But despite rapidly growing support from major nations, corporations and international organizations, an agreement on the need to price fossil fuels to address the fundamental drives of climate change is off the menu at COP21 climate conference in Paris. The question is why?

The current draft negotiating text barely mentions the topic, saying, “[Parties recognise that the appropriate pricing of greenhouse gas emissions in its many forms, is an important instrument for the reorientation of investment and finance flows consistent with a pathway towards low emission and climate resilient economies and societies.]” Although this is diplomatic speak with the equivalent force of saying “the sky is blue,” the brackets mean it might not make the final cut. No one is saying who is opposed.

This is despite 40 governments and 23 cities, states and regions having carbon pricing programs in place and 90 countries committed to either a tax or fee on carbon pollution or an emissions trading system, also known as cap-and-trade, as part of their greenhouse gas reduction plans.

In the past few months: Six of the largest U.S. banks –JPMorgan Chase Bank, Bank of America Corp., Wells Fargo and Citibank along with Goldman Sachs and Morgan Stanley–called on countries to adopt “policies that recognize the cost of carbon”; and Germany, Norway, Sweden, Switzerland and the World Bank Group announced a new $500 million effort to help developing countries transition to carbon pricing mechanisms.

On the first day of the Paris conference a high-level group of country leaders, company CEOs and civil society organizations, led by World Bank Group president Jim Yong Kim and International Monetary Fund managing director Christine Lagarde launched the Carbon Pricing Leadership Coalition. In addition, the World Economic Forum, with CEOs from 78 companies operating in over 150 countries with more than 2.1 trillion in revenue, issued a statement calling for “effective climate policies” that include “prices on carbon.”

There is a growing movement to voluntarily put a cost on carbon pollution. The discussion has moved beyond if carbon will be priced, to how it will be priced. And not all carbon pricing schemes are created equal—or have equal impact. If not properly constructed they can fail to lower greenhouse gas emissions, be plagued by corruption or endanger at-risk communities.

In response, as world leaders gathered in Paris, a diverse group of organizations and luminaries, led by the grassroots-driven Citizens Climate Lobby, sent a letter to COP21 delegates calling for the final Paris agreement to contain clear principles to guide nations to develop and deploy effective, efficient and equitable carbon pricing (E3CP) policies on fossil fuels.  Signatories included former U.S. Secretary of State George Shultz, actor Don Cheadle, Physicians for Social Responsibility, the Quaker lobby group Friends Committee on National Legislation, and Future 500. Saying it should not be deferred to future negotiations, they want the Paris agreement to support carbon pricing that is:

President Obama, at a Paris press conference, called climate change “a classic market failure.” He said, “If you put a price on [carbon], then the entire market would respond, and the best investments and the smartest technologies would begin scrubbing effectively our entire economy.”

It might still be a mystery who is trying to keep this powerful tool out of the COP21 accord, and why, but it’s not too late for world leaders and diplomats to marshal the considerable forces that support a price on carbon to include it in the final Paris outcome.

Don Kraus is a senior fellow at Citizens for Global Solutions and a member of Citizens Climate Lobby.