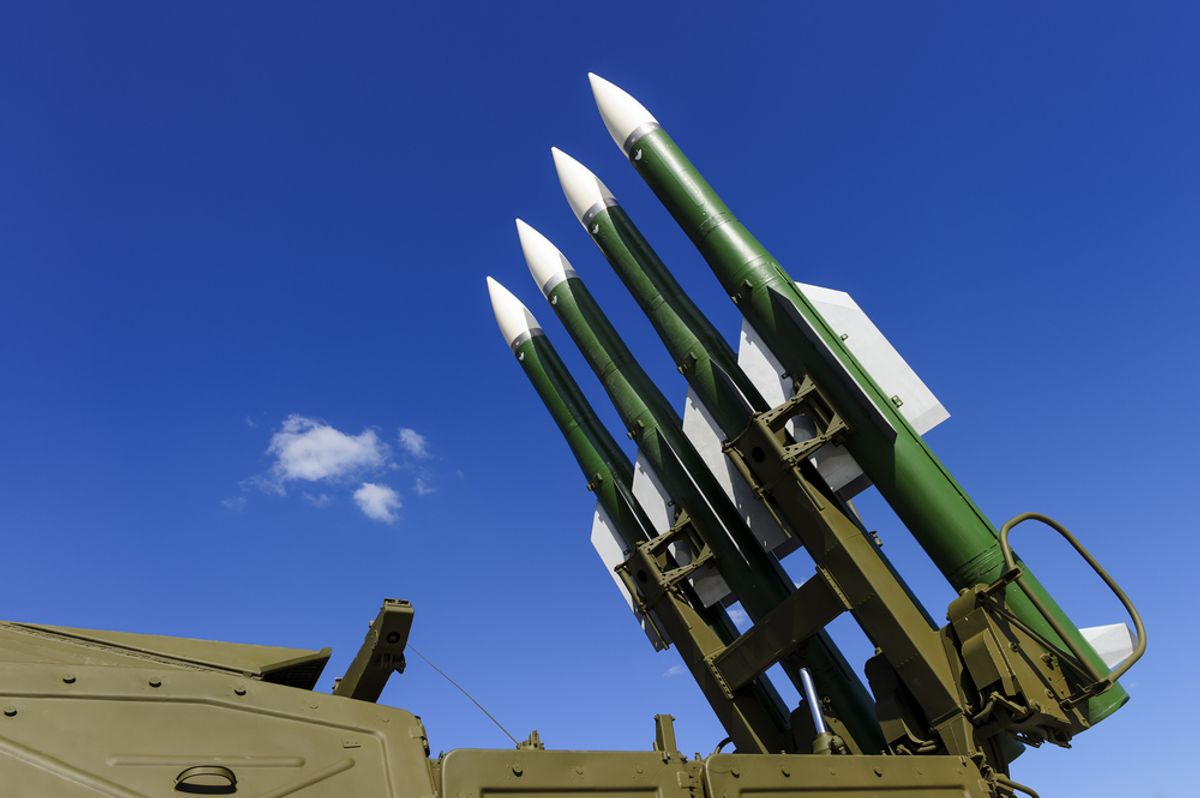 Republican candidates for president have all sang out in less-than-beautiful harmony about cutting taxes for the very rich and miraculously balancing the budget at the same time. They have also sworn they will increase military spending. Many of them are urging a full-scale war on ISIS and Donald Trump is even ready to commit war crimes in order to defeat them. Carly Fiorina has been banging the drum as hard or harder than most. “We need the strongest military on the face of the planet, and everyone has to know it,” she said at the Republican presidential debate in September: “More ships, more brigades, more nukes, more battalions.” Not a peep about how much her proposals would cost ($500 billion or so). Cuts in the safety net and closing loopholes will, they claim, make up for the gaping budget hole their bellicose plans would create.

The proposed recipient of all that GOP chickenhawk largesse, the Defense Department, is already busy spending billions and billions on projects that even some Republicans think are the equivalent of flushing cash down a gold-plated toilet (the 2014 Defense budget, including money for the various wars we are waging in the Middle East and Asia, was more than half a trillion dollars). And what do we get for all that dough? In part, ongoing military projects that have long been designated as pipe dreams, yet continue to suck money down a black hole. These projects have been referred to as “zombie” defense projects because of their refusal to die. Meanwhile, a fraction of that money would undoubtedly save and improve the lives of many Americans.

“Every gun that is made, every warship launched, every rocket fired signifies, in the final sense, a theft from those who hunger and are not fed, those who are cold and are not clothed,” Dwight D. Eisenhower said in 1953, sounding suspiciously like Bernie Sanders today.

Produced by Lockheed Martin, which began designing the jet in the 1990s, the F-35 is scheduled to replace practically all of the tactical jets in the Air Force, the Marines and some of the Navy. The jet is composed of thousands of parts, and those parts are produced separately in 46 different states (come on, Republicans, call it what it is: a national jobs program). Several of these jets have already been delivered. Meanwhile, the software has malfunctioned, jets have caught fire on the runway and in June 2014, the entire fleet was grounded. Since 2007, the F-35 fleet has been grounded 13 times. The design of the plane may have become overly complex, as all the military branches demanded more and more features on the basic design. Serious structural flaws may be the result.

The F-35 “is a dog …overweight and underpowered,” said Winslow Wheeler, director of the Straus Military Reform Project at the Project on Government Oversight in Washington. According to a 2008 Rand Corporation analysis, the F-35, “can’t turn, can’t climb, can’t run.” Defense analyst Richard Aboulafia told the publication Intelligent Aerospace, “The F-35 is coming to eat us all alive, there’s no way to sugar-coat it.” Despite all these early reviews, the F-35 refuses to die, and is on track to become the military’s standard warplane. The Pentagon expects to order nearly 2,500 of them in the coming decades at a cost of over $400 million. Lockheed-Martin has been accused of conspiring with the Defense Department to jack up the cost of the plane, leading Sen. John McCain to observe, “It is the kind of cronyism that should make us all vigilant against… the military-industrial complex."

In February 2012, Army Chief of Staff General Raymond Odierno told Congress that the U.S. had plenty of M-1 Abrams tanks. “Our tank fleet is in good shape and we don't need to [make repairs] because of the great support that we have gotten over the last two years.” Six months later, in August 2012, Ohio Sen. Sherrod Brown said the M-1 was, “vital to our country’s national security and military readiness, but is critically important to the economy of Lima and Allen County.” You can’t get more direct than that. The Army says it doesn’t need the tanks, which are built in Ohio using parts from all over the country. The Ohio senator, with support from senators where the parts are made, says, That's nice, let's build more of them. And so a couple thousand tanks are parked in the desert and over half a trillion dollars has been spent since 1994 to build these vehicles.

To make it worse, the tanks are outmoded. General Odierno says, “We don’t believe we will ever see a straight conventional conflict again in the future.” Instead he envisions conflicts like Iraq, where the use of weapons like IEDs make the M-1 vulnerable. General Dynamics, which produces the tank in Ohio, has, unsurprisingly, contributed a great deal of money to many members of the Senate Armed Services Committee (over $5 million through its PAC). Taxpayers forked over almost $200 million in 2014 for the M-1. In 2015, only $120 million. This zombie may die eventually, but not anytime soon.

Almost $3 billion has so far been spent developing a cruise missile/drone/low-flying airplane defense system for the U.S. called Joint Land Attack Cruise Missile Defense Elevated Netted Sensor System, or JLENS. Defense contractor Raytheon has been building blimps that are supposed to alert us when low-flying threats are on the way. In April this year, just such a potential threat happened when a low-flying airplane flew right into the heart of Washington, D.C. and landed on the Capitol lawn. (Its actual aim was to protest campaign finance reform.) JLENS never saw it—unfortunately, it was “not operational” that day.

Despite being in development for 17 years now, JLENS has been inconsistent in tracking objects, has “low system reliability” (according to a Pentagon report), is plagued with software glitches, doesn’t like bad weather, and is a sitting duck if targeted by enemy attack (“JLENS did not demonstrate the ability to survive in its intended operational environment.”). Oh, and even if all that wasn’t the case, it would cost too much to deploy enough blimps to actually protect the nation's borders and coasts.

The Army actually tried to kill this zombie five years ago, but Raytheon lobbyists went to work on Marine Corps General James Cartwright, who was vice-chairman of the Joint Chiefs of Staff. Money miraculously was found to continue funding JLENS, and Cartwright retired soon after and went to work for…Raytheon. This month the Pentagon suspended the JLENS program “indefinitely” after one of the blimps inexplicably broke from its mooring and went floating off over Maryland and Pennsylvania. Democrats on the Armed Services Committee want this zombie dead. Republicans continue to argue for it.

Not every zombie costs half a trillion dollars. Some cost quite a bit less, but they are zombies nevertheless. The Pennsylvania coal boondoggle, which has been going on since the 1960s, is a case in point. Every year the Pentagon spends around $17 million to heat its Kaiserslautern, Germany military bases. Around $1.5 million of that goes toward several thousand tons of coal from Pennsylvania that is shipped to Rotterdam, loaded on rail cars and moved to Germany. That’s because, by congressional fiat, the local German utility is required to burn expensive Pennsylvania anthracite coal instead of local coal.

After WWII, as the Pennsylvania coal industry was dying, lawmakers decided a little pork might pep the industry up. Congress made the Pentagon use the more expensive anthracite coal to heat its overseas bases. The waste reached its peak between 1962 and 1988, with taxpayers spending over a billion more than they had to in order to heat the German bases with foreign coal. Efforts were made to use less expensive coal from other sources, but Pennsylvania representatives John Murtha and Daniel Flood stymied the efforts. Flood and Murtha are long gone, yet the program continues lumbering on, thanks to coal lobbyists. Current Pennsylvania Rep. Matt Cartwright, while admitting the program’s folly (both fiscal and environmental), nevertheless told NPR, “It’s one of those things in Washington that if you want to dislodge it, you have to well up a force of steam to get that done. I’m not aware of any great groundswell of support to get rid of it at this point.” No knives to this zombie’s head.

In the 1980s, President Ronald Reagan proposed his controversial “Star Wars” missile defense system, a futuristic program that would shoot down Soviet ICBMs headed toward the U.S. before the nukes could destroy their targets. Never mind that the technology wasn’t there, the Missile Defense Agency was born, charged with developing a workable system, and continues to this day. So far the agency has spent over $10 billion and counting unsuccessfully developing missile defense systems. There were the lasers built into 747s that were going to shoot down missiles but would have to fly so close to enemy borders that they were sitting ducks for opponent anti-aircraft fire. Cost: over $5 billion. There were the $1.7 billion rocket interceptors that were to be fired from naval ships, except that they were too long and would have necessitated retrofitting the ships at a cost of multiple billions of dollars. There was the Multiple Kill Vehicle, a sort of Gatling gun that would fire small interceptors to destroy ICBMs. Cost: $700 million, and it never even got to the test stage. There was Sea-Based X-Band Radar (SBX), which was going to detect any incoming missiles and not be faked out by decoy missiles, except that it was prone to corrosion at sea, cost millions of dollars to fuel for short periods of times, and, oh yeah, it was faked out by decoy missiles. Cost: $2.2 billion.

Missile Defense Agency director Vice Admiral James D. Syring told the Los Angeles Times in a written statement, “We are very confident of our ability… and we will continue to conduct extensive research, development and testing of new technologies to ensure we keep pace with the threat.” Be afraid. The zombies live.