Always brash, "South Park" gets brave: From kids with guns to the P.C. principal, this was their most compelling — and self-aware — season

This season was more socially conscious than ever, but what does that mean for a show that trades in poop jokes? 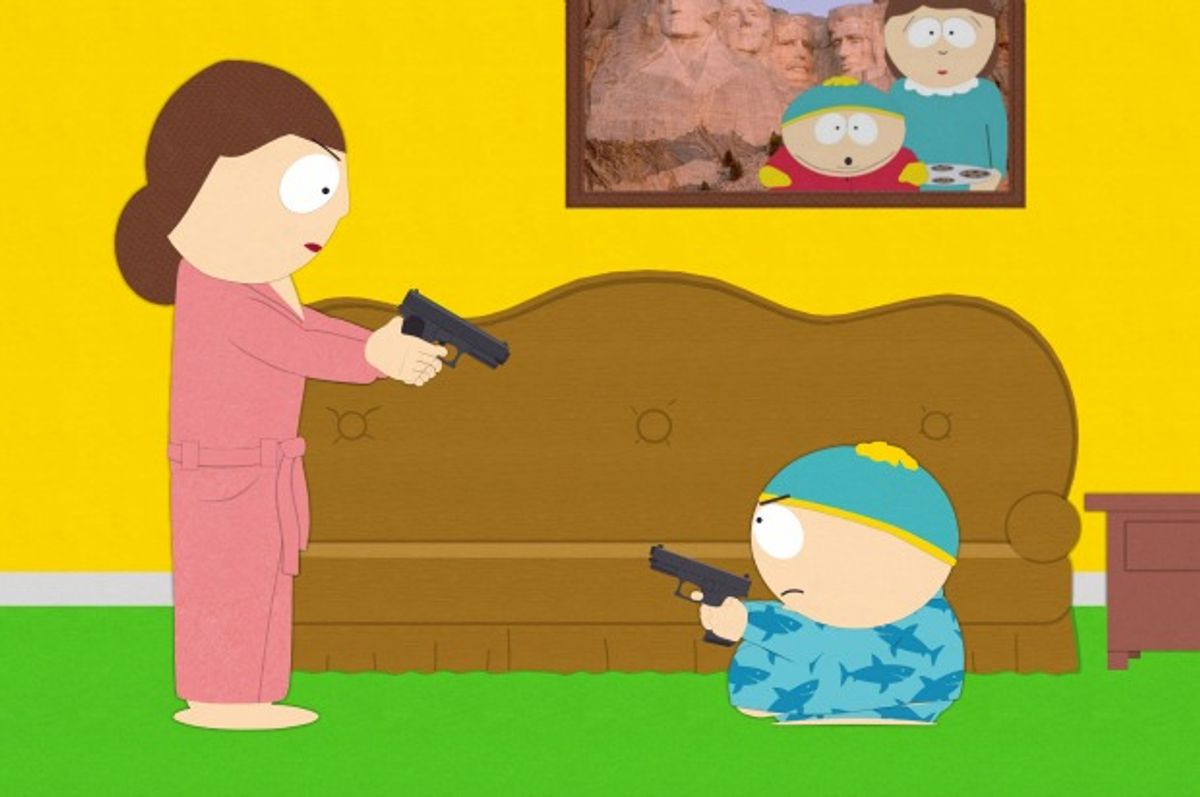 In terms of the lifespan of the show, the most revolutionary aspect of “South Park”’s 19th season, which ended last night, is that it told just one story. “South Park,” the long-running adult cartoon on Comedy Central, is not typically a show that goes for serialization, but this past season has fit together in one long arc, albeit a rather embellished one. The show, currently helmed by co-creator Trey Parker, is infamous for its short turnaround time; episodes are often finished just days before air, theoretically so that the show can be as relevant as possible. Season 19 showcases a combination of approaches. An arc was planned in advance for the whole season; then certain topical subjects were threaded into individual episodes. In “Naughty Ninjas,” the kids unwittingly scare off homeless squatters by adopting costume and behavior that makes them look like ISIS; later, protestors that use the rhetoric of Black Lives Matter protestors, but are a collection of bougie white people, rally against police misconduct. (They all fail to recognize that the problem might be that a SWAT team was called in to deal with a fourth-grader talking too much during assembly.) In the season premiere, Cartman and Butters somehow find a bunch of Syrian refugee children and deploy them at their rivals; later, in “Safe Space,” a cavalcade of South Park residents (and… Demi Lovato?) wander through a destitute camp of starving children, leveraging the scene’s tragedy for their own selfish reasons.

Last night’s episode, “PC Principal,” is likely the most horrifically topical of the season, and it could have been written a year ago: Everyone in South Park gets a gun, from the kids in elementary school to the gray-haired city officials. It’s not even really part of the story, which is about Kyle’s plotting against this season’s PC Principal, a bro who loudly and aggressively pushes tolerance and compassion. “We have to get guns,” Kyle says to his friends, in the boys’ bathroom. “It’s the only way for us to be safe.” “Kyle,” Cartman responds, “even if we thought they could help protect us, how are we all going to get guns?” Cut to Kenny, Butters, Cartman, and Kyle each holding a firearm. Kenny’s got not just one, but two handguns; Butters is carrying something more shotgun in appearance. “Cool,” Cartman says, checking his sights. “We got guns.” “I already feel a lot safer,” Butters squeaks.

Because they are all under the age of 10, these deadly weapons do not immediately get used for their coup against oppressive bureaucracy. Instead, Cartman pulls a handgun on his mom when she tells him to go to bed. She’s hurt (emotionally), scolding him both for having a gun and for aiming one at her. But then from the pocket of her robe she pulls out her own firearm. Both parties, engaged in a stalemate, shout that they love each other and hastily retreat. Minutes later, when the kids are searching for the safest place in town, they immediately decide on the gun show; after all, when more people are armed, we’re all safer. The gun show turns out to be a gun version of the Westminster Kennel Club’s dog show. Instead of trotting around hounds and Labradors, the participants prance about with their “shotgun-rifle mix” or their “playful and lovely Australian semiautomatic,” tossing treats, submitting to examination from the judges, and bowing to polite golf claps.

But for every moment of brilliance that “South Park” demonstrates, it offers one of indefensible grossness, whether that’s the perplexing visual depiction of Caitlyn Jenner throughout this season (in stark contrast to the textual depiction of her, which is a lot smarter) or the minutes-long song at the end of “You’re Not Yelping” that shows in vivid detail restaurant workers smearing snot, feces, and semen on the food of disliked customers. The moments of zany genius the show accesses are weighed down almost immediately by the grotesque.

It is a combination that has made Trey Parker and co-creator Matt Stone millions and millions of dollars—the Hollywood Reporter notes that sales of “South Park” t-shirts alone made $30 million in the ‘90s. Even at its least incisive, “South Park” is perennially relevant, because of the enormous pull it still has with its largely young and male audience. (There is a kind of everlasting youth for dick jokes.) And the main reason “South Park” plays so well with that segment of the population is because “South Park” never, ever, gives any fucks. The one black student at the elementary school is dubbed “Token,” the female characters are either children, moms, or wearing thongs, and Parker and Stone have ridiculed Scientologists and depicted the Prophet Muhammad, among numerous other well-documented controversies. James Poniewozik at the New York Times called “South Park” a kind of Charlie Hebdo for American animation, and that’s a great way of framing the ethos of the show—privileged men who loudly claim to be equal-opportunity offenders and obviously aren’t anything of the kind. “South Park” is smart, but it has the ethos of the asshole.

Whether or not Parker and Stone are motivated by self-loathing or self-congratulation seems to be in the eye of the beholder; certainly, the wall of text that immediately precedes the show’s opening credits declares that “due to its content it should not be viewed by anyone.” But in this 19th season, the self-loathing—and maybe something on the other side of that, like self-awareness—are more palpable than ever. In addition to opting for serialization, “South Park” this season has appeared to ask more questions of itself than ever before—and though those questions are asked in characteristically loopy, vulgar, and inconclusive ways, the questions are still there, hanging in the air, brought up by the show itself. The season-long arc follows the hiring of a new principal for South Park Elementary—the aforementioned PC Principal—who brings with him a wave of change. The residents of South Park learn about social justice, sort of.

So, from the season 19 premiere onward, political correctness is positioned in the show in some surprising ways. I’ve read a couple of critics—specifically at TV Guide and the A.V. Club—argue that “South Park”’s intended goal with this politically correct bro scene is to offer a thinly veiled middle finger to the notion the “PC police.” I don’t agree; it reads as genuinely more fraught to my eyes. The primary destabilizing element is that the PC principal—and his fraternity of PC bros, which has to turn an omega on its side to look like a “c,” because there is no “c” in Greek—is technically, macho-ly, kind of cool. Not quite as devil-may-care as the show’s guiding force of trolling nihilism, sure. But not easily dismissed, either. The aesthetic of the show privileges the violent and outsize, both visually and sonically, with its color-blocked animation style and purposefully tinny voices. Which is to say, it privileges the masculine. In the mouths of any other characters, feminism would be a joke before it evaporated from the air. Here, in the mouths of these charming and somewhat doofy bros, it’s both a commentary on co-optation and on masculinity, with the added comedic benefit of a bunch of tough guys being really aggressively nice, because machismo.

Indeed, it’s one of the season’s great comedic coups, that 99 percent of the people who argue for sensitivity, safe spaces, and respect for underprivileged and marginalized experiences are almost exclusively fratty white bros, who put political correctness, working out, and “pussy-crushing” on about the same level of enjoyment. Similarly, one of the season’s bizarre moments of brilliance is that regulars Kyle and Cartman seem to occasionally get the limitations of their worldview. “We’re two privileged straight white boys who have their laughs about things we never had to deal with,” Cartman says at one point. It’s almost as if Parker and Stone are making some belated explanations for their own behavior.

The PC Principal’s appointment sparks a wave of liberal-ish change in South Park, including a heated discussion over illegal immigration—of Canadians, natch—and changing aspirations for the average citizen of the small Colorado town. Regular character Randy, among others, becomes obsessed with the idea of validating their hipness with the ultimate in bourgeois accessories: a Whole Foods. The campaign for the Whole Foods leads to a spate of urban gentrification, including one revitalized neighborhood now called Shi Tpa Town. The Whole Foods-centric comedy is reliably great throughout the season, and carries through to the final episode, when Whole Foods turns out to be an act of alien aggression against the survival of humanity (which, sure).

And again, though the season is dogged with frustrations that are not funny so much as cruel—of the four non-kid, non-mom women in the show, three are depicted exclusively in bondage-wear or lingerie, and the fourth is a grotesquely caricatured Caitlyn Jenner—there is a glimmer of something beyond purely despising human frailty. Whether it is the kids dressing as ninjas and inadvertently looking like ISIS, or advertisements preying on the Whole Foods-addled minds of the South Park residents to lull them into a false state of corporate security, the common thread of this season of “South Park” is less a fear of ideology and more a fear of the oversimplification, misunderstanding, and co-optation of ideology. The show has always prided itself on skewering idiocy and individuals, not groups and identities. This might be the first time that I actually believe that argument. After all, the season’s uber-villain turned out to be that bratty little girl who talked through PC Principal’s awareness assemblies. This, after Butters is nearly killed by the sheer volume of hate speech he has to wade through on the Internet.

I’m not sure, though; it’s entirely possible that this season 19 was just a weird experiment, and season 20 (which has already been greenlit by Comedy Central) will be a return to grosser form. “South Park” despises easy answers, and that in itself makes it a show that people come back to, nearly two decades after its debut. Still, I found myself surprisingly moved by the last lines of the finale. As the aliens take back their Whole Foods, Randy yells, “We built a better town. We didn’t need you to do that. And we’ll keep trying to make it better!” And as PC Principal declares a war against the aliens, but also, against hate speech—“we are at war, but the only way to win this war is to be as understanding, non-biased, and politically correct as possible”—Stan looks left and right at Kenny, Cartman, Butters, and Kyle. “This is going to be really hard.”