Donald Trump is the GOP now: Sorry, Bob Dole, and even Dick Cheney. This is your party

The Republican Party cannot disavow Trump as "anathema" to the GOP — for too many voters, he is the GOP 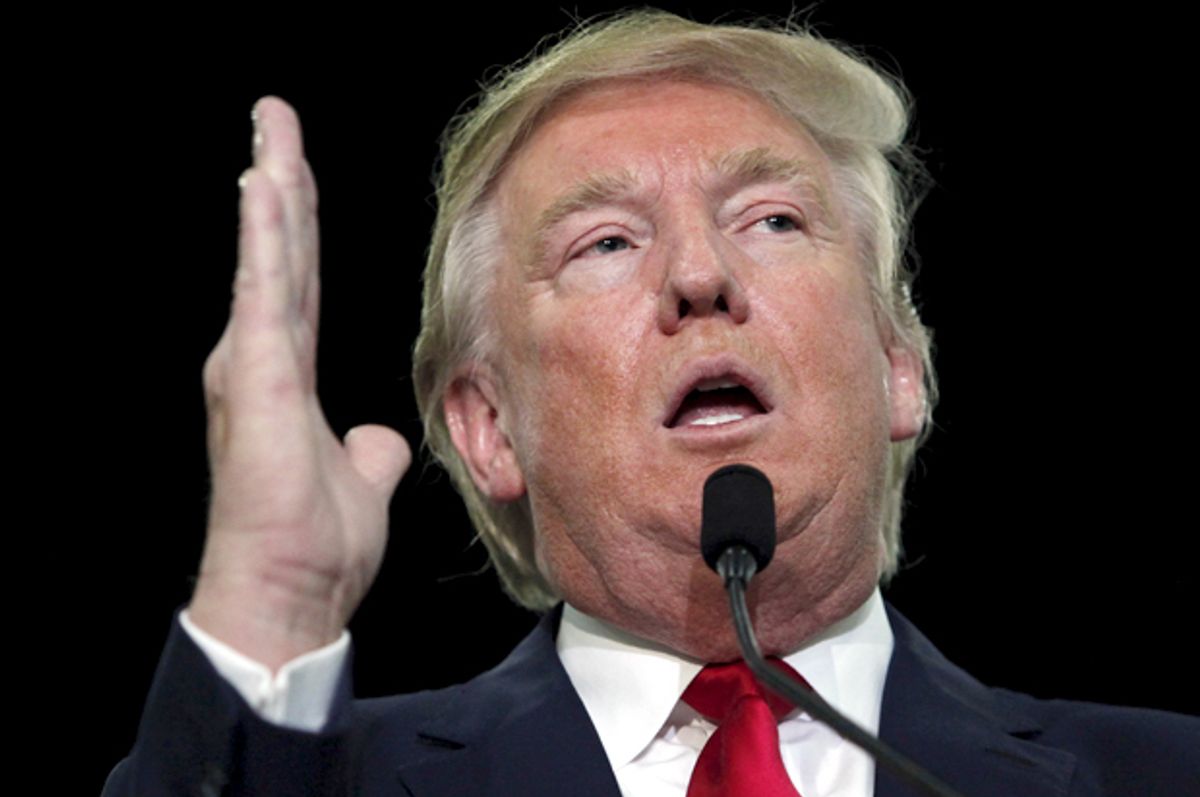 The latest round of widespread public outrage over presidential candidate Donald Trump’s abhorrent worldview reminds me quite vividly of the very first round of public outrage at the Trump ethos. At this point it feels like a frayed memory of a simpler, quainter time, but we were all once quite upset with Mr. Trump for stating in his announcement speech that immigrants coming into the U.S. from Mexico are criminals, drug traffickers and rapists. Well, most of us were, at any rate.

The conservative reaction to Trump’s “rapist” remarks was hugely fragmented, with some rallying unreservedly behind him and others arguing that he probably went a bit too far but was nonetheless kinda right. The latter response was best conveyed by National Review editor Rich Lowry, who wrote a Politico Op-Ed headlined “Sorry, but Donald Trump Has a Point.” Trump didn’t actually have a point, but Lowry’s column was instructive in that it showed the dilemma Trump posed for Republicans and conservatives: His rhetoric and extremism are abhorrent, but they’re not too far removed from what Republican politicians and their conservative backers believe and say.

Here we are a few months later, and Trump is drawing even more widespread condemnation for his proposal to ban all Muslims from entering the U.S. It’s only the latest in a string of reprehensible Trumpisms, but this one was apparently the final straw for the Washington Post editorial board, which called for other Republican officials to denounce Trump and expel him from their ranks:

As Mr. Trump’s fellow Republican candidates now acknowledge, there is a real-world cost to a campaign that gains traction by spewing hatred, bigotry and rage. Criticizing Mr. Trump is no longer sufficient. It is time to say clearly he is anathema to the Republican Party, and to the nation.

This is both a misstatement of the GOP’s Trump problem and a misdiagnosis of how to handle it. The Post is correct that most of Trump’s fellow Republican candidates have been reticent to directly challenge him or declare in unambiguous terms that Trump is not representative of their party. But that’s because Trump is most certainly not “anathema to the Republican Party.” That should be glaringly obvious by this point. His lead among GOP voters nationally and in early primary states has been largely unassailable. His policy positions shock the sensibilities of people outside the Republican base, but they’ve done nothing to drive down his support. Trump is not an aberration; he’s the end product of a years-long Republican political strategy that exploited white resentment and nurtured xenophobia. That’s why you see candidates like Ted Cruz shadowing Trump’s policy positions and pointedly refusing to criticize him – Cruz wants Trump’s votes, and he understands that his best chance for winning the primary is to be acceptable to the large pro-Trump bloc of the Republican Party.

It’s also silly to think that condemnation from party elites will, at this point, be sufficient to neutralize the Trump threat. Even if they weren’t wary of alienating his base of support, Trump feeds off of the antagonism of the Republican establishment. When he signed the RNC’s loyalty pledge promising that he would support whomever becomes the GOP nominee, Trump made clear that he did so because the party pledged to treat him with “fairness.” If they turn on him now, Trump can just make himself the victim, arguing that he’s been betrayed for doing nothing more than speaking to the concerns of Republican voters.

And when it comes to banning Muslims, Trump is indeed speaking for a large chunk of the GOP electorate. Bloomberg conducted a snap poll that found close to two-thirds of Republican primary voters “favor Donald Trump's call to temporarily ban Muslims from entering the U.S., while more than a third say it makes them more likely to vote for him.”

That’s why, just as with the immigration fracas, you have conservative bigwigs either defending Trump or rationalizing his bigotry when he calls for banning Muslims from the country. Erick Erickson praised it as “brilliant” politics even if it was flagrantly unconstitutional. National Review’s Andrew McCarthy said that Trump, his “rhetorical excesses aside,” has touched off a “badly needed discussion” about Muslim immigration. Rush Limbaugh warned Republican politicians that “you can condemn Trump all you want, but it is not going to buy you any love or respect or admiration from the Drive-By Media and the Democrats.” It also won’t help them with the GOP electorate, which, after years of encouragement from those same Republican politicians, sees itself in xenophobic demagogue Donald Trump.