The truth about Dick Cheney vs. Donald Trump: Why the former dark lord of the GOP still can't be trusted

Cheney has taken exception to Trump's overt xenophobia, but his response speaks volumes about the state of the GOP 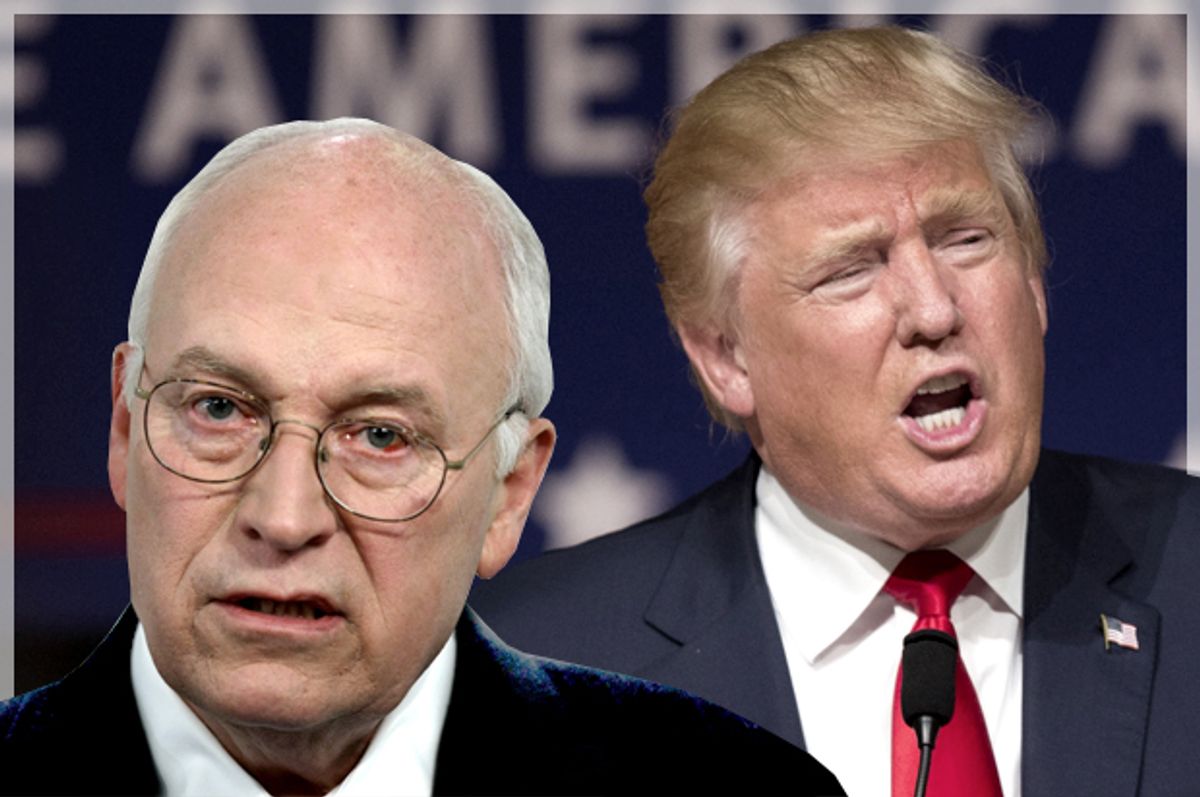 Dick Cheney, fresh off the unveiling of a bust celebrating his legacy in Emancipation Hall in the Senate, is getting a lot of credit for criticizing Donald Trump's latest racist call to exclude Muslims from the country. "I think this whole notion that somehow we can just say no more Muslims, just ban a whole religion, goes against everything we stand for and believe in," the former vice president said in a radio interview with Hugh Hewitt. "I mean, religious freedom has been a very important part of our history and where we came from."

That's the part of the interview that has been interpreted as an attempt to moderate the boiling racism that Trump has used -- for months, really -- to remain atop the GOP presidential primary race.

But Cheney didn't stop there. He then emphasized that one of his ancestors arrived as a religious refugee, a Puritan. "A lot of people, my ancestors got here, because they were Puritans." Cheney suggested, then, that the place was empty when William Cheney arrived in the 17th century. "There wasn't anybody here, then, when they came."

There has been little recognition that, in speaking out against the ban on all Muslims, Cheney either unintentionally or intentionally propagated another racist myth, that there "wasn't anybody here" when the Puritans came.

It's unclear whether Cheney meant there was no formal state to exclude the Puritan refugees, or whether he really meant -- which is what it sounds like -- that the continent was empty in the 17th century.

But it seems like a very subtle dog whistle, the kind Republicans used to limit themselves to, suggesting that it is OK for white men to colonize a previously occupied space, even while espousing a kind of tolerance for what we would recognize as religion. By claiming "there wasn't anybody here" when colonists first came to America, Cheney normalizes conquest, the same kind of conquest he demanded in the Middle East a decade ago, which has so badly exacerbated extremism and continued to make us insecure.

Cheney may be trying to get Trump to tone things down. But there is a real continuum between Cheney's subtle dog whistle and Trump's inciting racism that ultimately, across the entire continuum, suggests "we" (meaning white America and whatever brown people endorse the myths of white America, as well as white America's oligarch partners overseas) have the right to conquest. Cheney would never do anything to discredit the underlying belief in American exceptionalism that has fostered the sense of resentment that feeds Trump. On the contrary, Cheney thinks we need more of that kind of exceptionalism, that President Obama doesn't do enough of it. Cheney just rolled out an entire book arguing America has to reassert its "strong" militaristic leadership around the world.

Cheney thinks, just as Donald Trump thinks, the U.S. should be able to dictate policy to the rest of the world. He likely just recognizes that doing so is easier to do if the white Americans suffering from the emphasis on such things rather than on investment in America aren't quite as riled up as Trump has gotten them.