"We will not be silent": American Jews hit the streets during Hanukkah to fight Islamophobia and racism 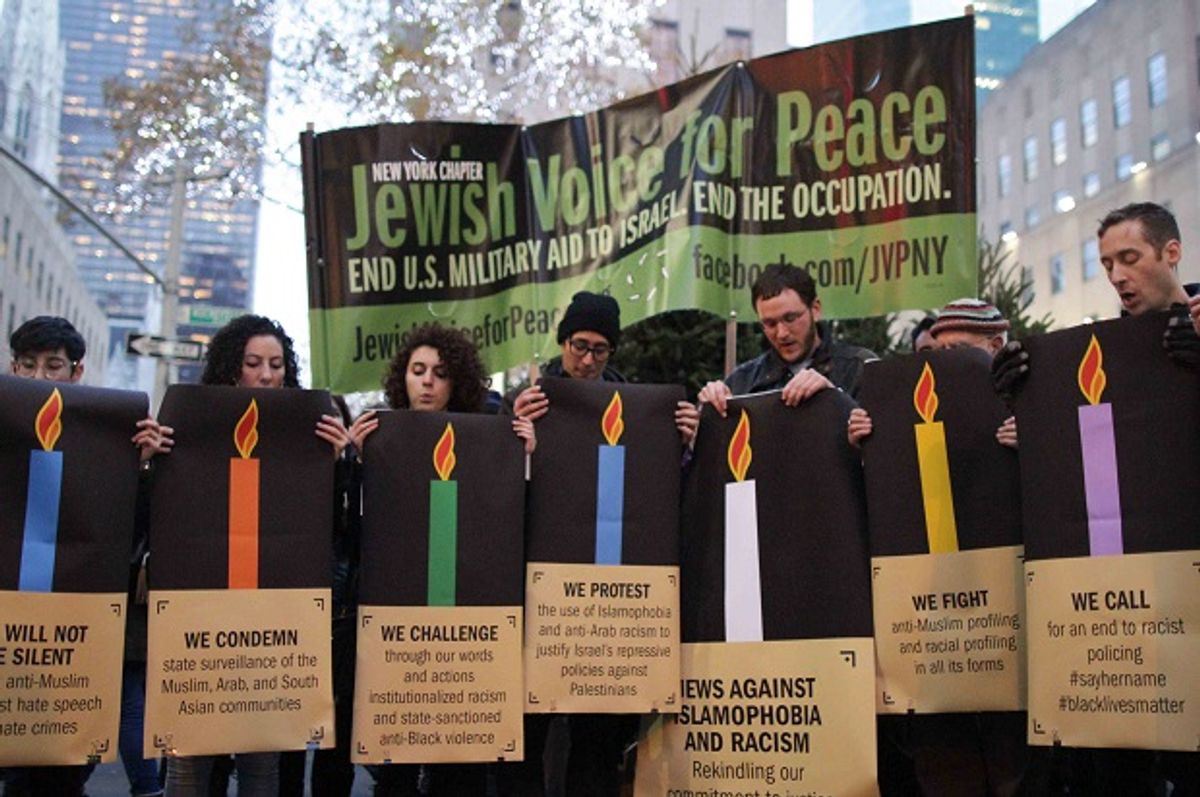 This Hanukkah, Jews across the U.S. are taking to the street to rally against the Islamophobia and racism rampant in their communities.

On each night in the eight-day-long religious holiday, Jewish activists are participating in protests against various forms of injustice in a campaign initiated by the Network Against Islamophobia, a project called for by national peace organization Jewish Voice for Peace (JVP) to challenge anti-Muslim bigotry, along with Jews Against Islamophobia, a coalition of JVP-New York and the activist group Jews Say No!

The demonstrations are being held in 15 cities throughout the country, including Chicago, Boston, Miami, Seattle, Atlanta. The first demonstration was held at New York City's Rockefeller Center on Sunday, Dec. 6, the first night of Hanukkah.

Activists are conveying their commitments through signs in the shape of eight candles, which together comprise a symbolic menorah. A ninth sign, modeled after the shamash, or "helper" candle, reads "Jews against Islamophobia and racism — rekindling our commitment to justice." The eight pledges listed on the other candles are:

"Our goal in creating this action during Hanukkah and in creating the eight statements — which mark a rekindling of our commitments to justice — was to make visible the extent and multiple manifestations of Islamophobia and racism and to re-commit ourselves fully to this work," JVP activist Donna Nevel told Salon. "Intersections and connections are being made, not to create sameness but to strengthen the distinct, yet overlapping struggles for justice."

"I believe that our role as members of the Jewish community is to continue to speak out as Jews opposed to Islamophobia; to continue in our work to expose the underlying issues and links related to Islamophobia and the politics of both Israel and the U.S.; to meaningfully engage with those who are living and experiencing racism and Islamophobia; and to be principled, consistent partners in this work," Nevel added.

The nationwide protests vary in type. At the more traditional New York demonstration, there were readings from the rabbinical council and other statements, along with candle-lighting and singing. In Milwaukee, activists protested right-wing Wisconsin Gov. Scott Walker, who was invited by the Milwaukee Jewish Federation to be honored by lighting the menorah. Rachel Buff, co-coordinator of Milwaukee JVP, told Salon that she and fellow members of the groups Jews for Refugee Relief thought his participation at the event was "wrong" and "ironic."

"Gov. Walker has been among state governors opposing the resettlement of refugees from the Middle East in the United States," Buff said. "Grounded in a vicious Islamophobia, this anti-­refugee sentiment fosters oppression and tyranny, the very things routed by the Maccabees in the Hanukkah story." Buff joined several other activists in bringing signs to the Milwaukee Jewish Federation Hanukkah celebration. Fellow Milwaukee JVP Co-Coordinator Jodi Melamed held a sign that read, "Anne Frank's visa application was turned down by the U.S. government," referring to the German-Jewish young girl who was killed, along with her family, in the Holocaust.

"If [Frank] had been accepted she could have been a 77-year-old woman living in Boston today," Melamed's sign read. "Remember that when you hear all this anti-refugee rhetoric."

Another Milwaukee JVP activist held a sign reading "Walker is a schmuck."

In Miami, protesters gathered in front of the Torch of Friendship, in the downtown area. In Chicago, JVP activists will be protesting outside of the Jewish United Fund (JUF) on Dec. 10, condemning the organization for its partnership with the Chicago Police Department and the Israeli military, which are working together in counter-terrorism training programs that are frequently tied to increasingly violent clampdown on peaceful protests and the militarization of the streets.

"As Jews, we are appalled that the JUF has enabled police militarism in Chicago by sponsoring trips to Israel for police leaders to 'share best practices and learn about Israel’s cutting-edge policing strategies and technologies' and 'bring the lessons home,'" JVP-Chicago said in a statement.

"We cannot stand idly by as the JUF promotes these 'worst practices' of militarism and racism," JVP-Chicago continued. "The JUF, an institution that funds Jewish social service agencies in our city, is accountable to the community it purports to represent. As Black activist groups throughout Chicago have issued a call for an end to 'business as usual,' we believe it is our responsibility to stand with them."

Salon reached out to the JUF, asking if it would like to respond to JVP's criticisms. Vice President Aaron Cohen said he was "appalled" at JVP's comments, which he called "spurious rationale." "This is nothing but a cynical maneuver intended to advance an anti-Israel and anti-Jewish federation agenda on the back of a relationship that has absolutely nothing to do with racism or criminal behavior in the Chicago Police Department," Cohen stated.

"JUF and our local Jewish agencies, just like other ethnic and faith-based organizations, including Muslim ones, maintain strong ties with law enforcement at every level. The relationship centers on our role in enhancing security for synagogues, schools, JCCs, and other community institutions," Cohen added. "Our Muslim counterparts maintain the same sorts of relationships for exactly the same reasons—to keep communal institutions secure. Visits to the Israel police have been instructive parts of our relationship, and it is fair to say that lessons learned in Israel are also applied to help keep both mosques and synagogues safe in Chicago. By accusing a Jewish communal institution of complicity in criminal police behavior, JVP actually is endangering Jews."

JVP National says its hopes, with the week of Hanukkah actions, to "challenge state-sanctioned Islamophobia and racism and to call for the United States to welcome refugees."