We just might have to wait until he's out of office 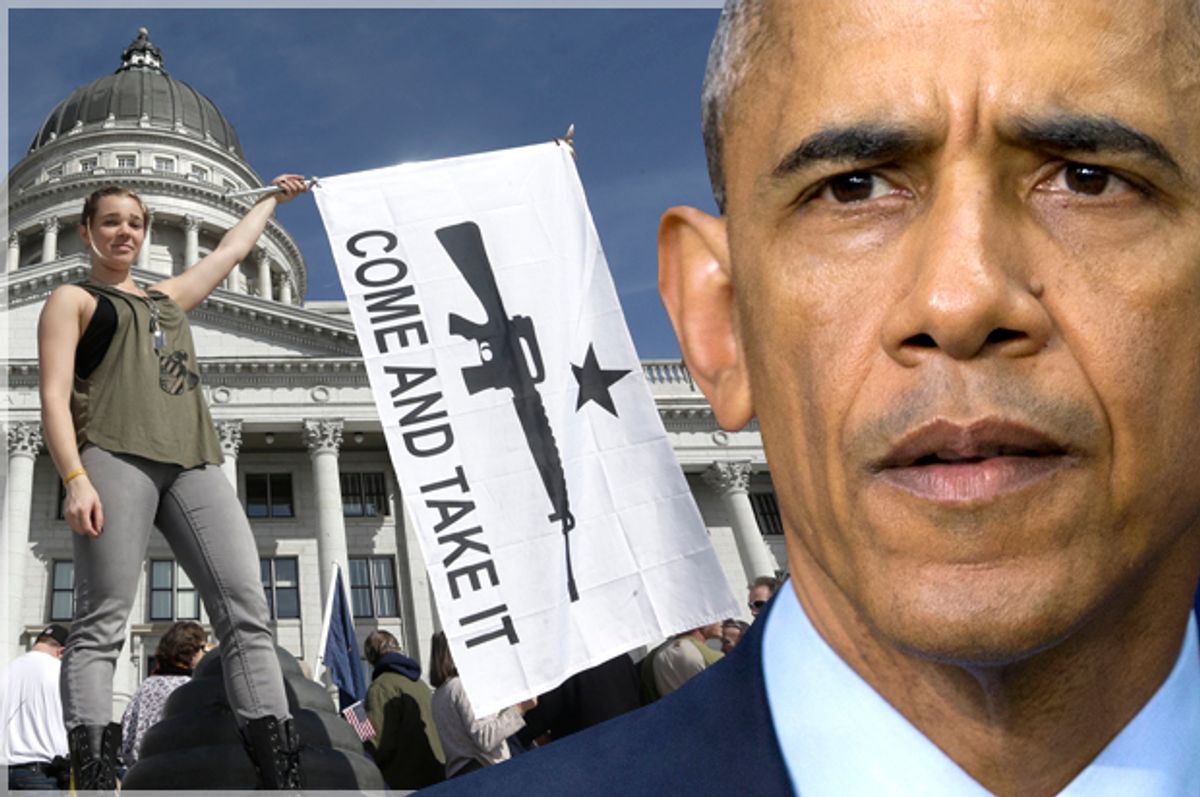 Last Wednesday’s massacre in San Bernardino was made all the more painful by the frustrating reminder that Congress and state legislatures around the country will once again do nothing, because these legislators are fearful of the wrath of the massive and unrelenting gun lobby that would come down if they offered anything more constructive than thoughts and prayers. The NRA has so completely dominated the political conversation surrounding guns in the United States that it’s not worth even trying anymore; even if Democrats controlled Congress, federal legislation would be a long shot. As the British writer Dan Hodges said earlier this year, “In retrospect Sandy Hook marked the end of the U.S. gun control debate. Once America decided killing children was bearable, it was over.”

If there’s one person who might be able to change that, though, it’s Barack Obama — he’ll just have to wait until he leaves the White House to do it.

Another emerging group pushing gun control legislation, Americans for Responsible Solutions, said in June of last year that it expected to raise more than $20 million in 2014; at the end of the cycle, it had spent just $7.6 million. The NRA lapped both of them, spending nearly $28 million. Last year, four gun rights groups including the NRA spent more than $1 million on federal lobbying efforts; on the gun control side, only Everytown, at $1.2 million spent on lobbying, eclipsed $100,000. You read that right — only one gun control group spent over a hundred thousand dollars on federal lobbying efforts last year.

It’s paid off; with the exception of the resounding victory of Washington’s universal background check ballot initiative last November, gun control advocates have been hard-pressed to find a win. The two major pieces of gun control legislation proposed following Sandy Hook died in the Senate, and after a rare win in Colorado, two Democratic state senators were deposed by NRA-backed recall efforts and Gov. John Hickenlooper actually apologized for the legislation. (When pressed further by a rural pro-gun sheriff on his support of the bill, he responded jokingly, “What the fuck? I apologized!” How whimsical.)

Money and this aura of invincibility aren’t the only reasons the NRA is winning, though. No one seems to be able to pinpoint exactly how many members the NRA has, but former NRA lobbyist Richard Felman told BuzzFeed in 2013 that the NRA has a massive database storing the information of “tens of millions of people,” which, if true, rivals that of the major parties.

That’s where Obama comes in.

The president has grown increasingly frustrated with every press conference given following a mass shooting. Sandy Hook broke him; Roseburg and San Bernardino just pissed him off. Obama takes these mass shootings and the failure of Congress to do anything that might rectify them personally, and at various points in his presidency, he’s used and thought about using executive authority to reduce gun violence. Gun violence hits close to home, too; back in 2013, Obama referred to gun crime against children in his adopted hometown of Chicago as “a Newtown every four months.”

But the president only has so much political capital, and it became obvious that the political climate wasn’t conducive to reasonable gun reform when even the ridiculously mild Manchin-Toomey amendment failed four months after the Sandy Hook shooting. Since then, the Senate flipped to the Republicans, so even if Obama wanted to spend every waking second between now and the 2017 inauguration on making our gun laws resemble something more reasonable than a drunk teenager playing "Grand Theft Auto," it’d all be for nothing.

What Obama does have, however, is the most effective political organization the United States has ever seen. Obama raised a combined $1.4 billion between his 2008 and 2012 campaigns, and giving his voter email list to the Democratic National Committee “more than doubled” the party’s contact list.

The Democrats’ problem has never been that they’re outnumbered, but rather that they’re not able to turn out voters like Republicans; even in 2014, when they got walloped and lost the Senate, a Pew study found that Democrats had a national advantage of 48 percent to 39 percent over the Republicans. Recently, Obama’s two campaigns have been the exception, because he’s one of the most skilled politicians the country has ever seen.

He’ll only be 55 by the time his presidency is over, and it’s a fact that even bad presidents become more popular after they’ve been out of office for a while. With that in mind, it makes sense that he would pursue the one issue that’s stumped him most during his entire presidency.

Obama’s reach and ability to turn out the vote, combined with Bloomberg’s money, effectively levels the playing field with the NRA on any potential gun legislation. From outside of the White House, Obama can push gun control way more effectively than he has in the past six years. He won’t have to compromise with the Republicans anymore, or keep the Democratic caucus happy and electable.

If Hillary Clinton or Bernie Sanders is elected in 2016, they’re going to immediately become mired in political battles with Republicans, who are definitely going to keep the House of Representatives and may keep the Senate even if another Democrat is elected president. Sanders has made no secret that his major focus is income inequality and campaign finance reform, and while Clinton has been more vocally pro-gun control than her democratic socialist challenger, she won’t have the votes to get anything done in Congress on something as polarizing as that until the Democrats regain a majority in the House and Senate.

Of course, it’s entirely feasible that someone who was just president for eight years would never want to talk about politics again, as was the case with George W. Bush, who has remained virtually silent on politics since leaving office until he popped up a couple months ago to remind everyone that even Republicans don’t like Ted Cruz. Obama could focus his post-presidency on uncontroversial issues that everyone can (theoretically) rally behind; he could go back to teaching; he could make a ton of money giving speeches like Bill Clinton. And take it from Bush; staying quiet might help him rebuild his reputation with both soft supporters and people who currently loathe him.

But when the Obama Foundation (the entity behind the future Obama Presidential Library) was introduced in an email to supporters back in May, David Plouffe wrote, “This Foundation will not only celebrate the progress we've already made together but also continue to drive transformative change.” If Obama wants to truly drive transformative change, this is where he can do it: By providing a powerful counterweight to the gun lobby’s influence, and finally getting the win over them he wanted for nearly his entire presidency.