Are they serious? Donald Trump is nothing like Jimmy Carter: Here's why the right-wing meme about the Muslim ban is complete lunacy 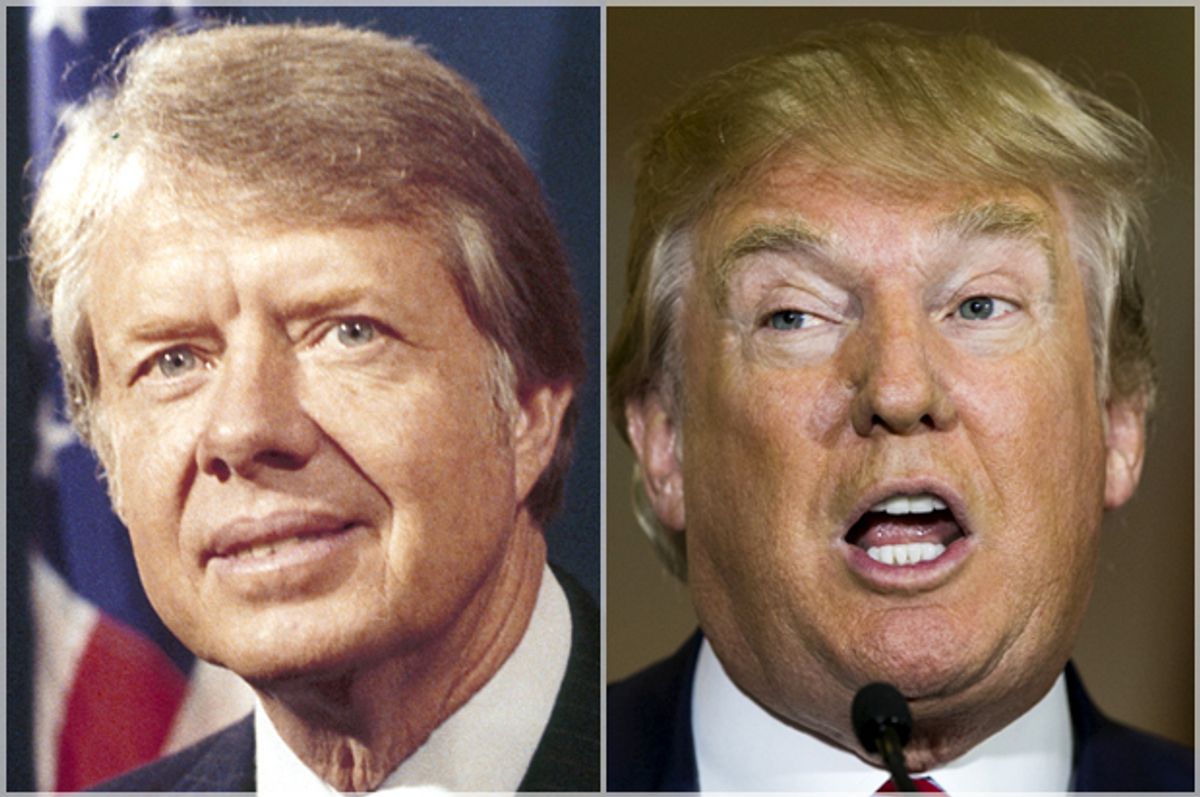 There’s a right-wing meme making the rounds on social media comparing President Jimmy Carter’s restrictions on Iranian visas during the hostage crisis to Donald Trump’s proposal to ban all Muslims from entering the United States. The point, it seems, is that there’s a precedent (a liberal precedent in particular) for Trump’s sweeping ban.

The meme reads as follows:

“How many are aware that President Carter banned Iranians from coming to the US, with the exception of those with a major medical emergency or threat of political persecution? Additionally, between November 1979 and April 1980, 14,768 Iranians (2,204 were students) were removed from the country. It all happened under executive orders #12172 and 12206).”

The conservative website, Frontpage Mag, expanded the meme into an explicit comparison:

“Trump is a monster, a madman and a vile racist. He’s just like Hitler. Or Jimmy Carter…During the Iranian hostage crisis, Carter issued a number of orders to put pressure on Iran. Among these, Iranians were banned from entering the United States unless they oppose the Shiite Islamist regime or had a medical emergency…Apparently barring people from a terrorist country is not against ‘our values’ after all. It may even be ‘who we are.’ Either that or Carter was a racist monster just like Trump.”

For those looking to put a happy face on Trump’s discriminatory proposal, this argument was a welcomed lifeline. Naturally, Rush Limbaugh was eager to draw a false equivalency: “Everybody in the establishment in the political class, Republican, Democrat, media, you name it, is all claiming that what Trump said is dumb, stupid, reckless, dangerous, unconstitutional, while it is the law of the land. And it was utilized by Jimmy Carter, no less, in 1979 to keep Iranians out of the United States.”

Even Ann Coulter jumped on the train, writing on Twitter: “On Dec. 27 1979, DC Ct of Appeals upheld Carter’s deportation program: Iranian students could be singled out b/c Iran violated international law.” She followed that up with another Tweet noting that Carter ordered immigration services to check “the student visas of more than 50K Iranians allegedly studying in the U.S.”

Despite some broad resemblances, however, Carter’s actions and what Trump has proposed are fundamentally different. To begin with, Carter’s ban was not a security measure; it was one aspect of a much broader sanctions package designed to resolve a crisis. Sanctions are an essential tool in conflict resolution: The aim is to force a state to curb its behavior without the use of military force. Carter was applying political and economic pressure on the Iranian regime with the explicit goal of freeing the American hostages. A blanket ban on Muslims is a kneejerk reaction to a much different problem – in this case, a mass shooting – than what Carter faced.

The most significant difference is that Carter was targeting citizens of a specific country in the midst of a protracted conflict. Trump, on the other hand, wants to ban all Muslims, irrespective of nationality. There is a vast difference, both legally and logistically, between banning citizens of a sovereign nation, which are easily identifiable, and members of a religious group or ideological sect.

Of course, there’s also the problem of international law and the American constitution, neither of which supports religious discrimination on this scale. But’s another argument altogether. The larger point is that Carter and Trump are operating in very different contexts, and Carter’s actions, whatever you think of them, aren’t analogous to what Trump has suggested.

Don't expect the Carter-Trump meme to die anytime soon, though.