Jesse Watters attempts to mock patrons of the arts, accidentally reveals how irrational his party's anti-refugee fear-mongering is

No refugees allowed, he argued, even if there's only a 1 in 11.5 million chance of one being a terrorist 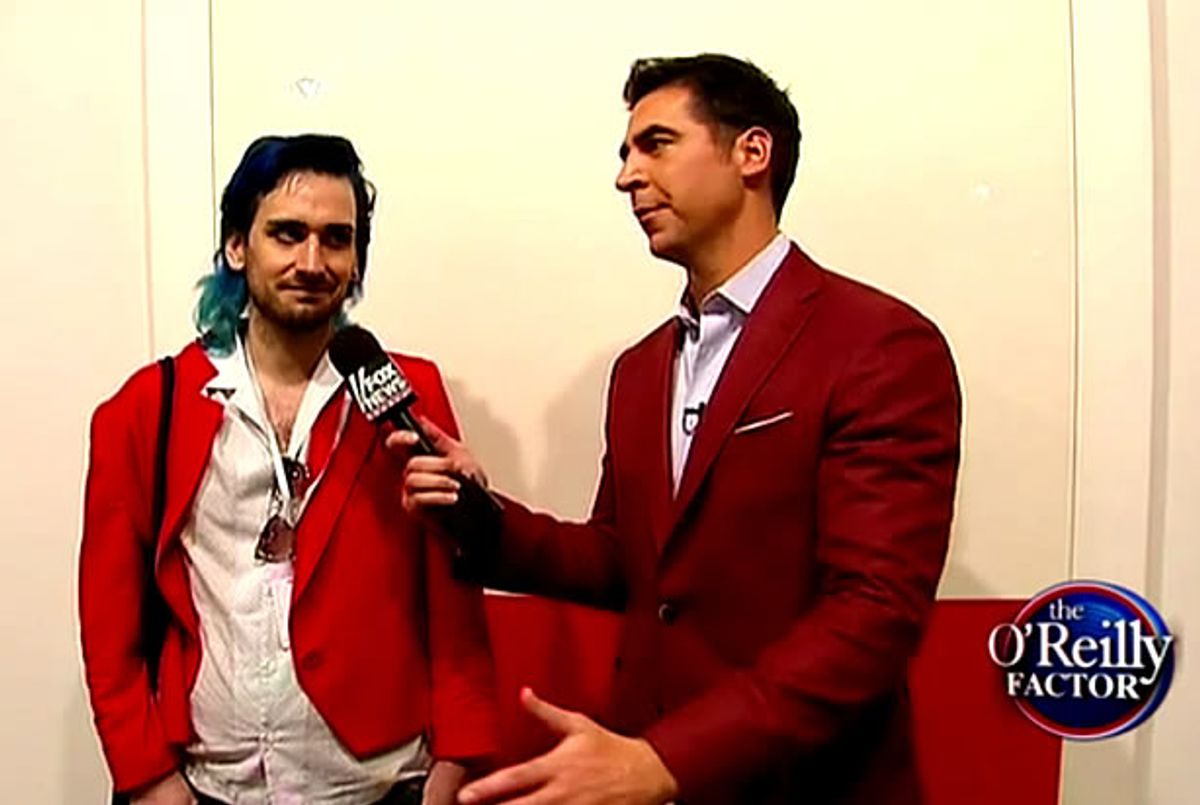 On "The O'Reilly Factor" Thursday evening, Jesse Watters took aim at the only wealthy people to whom Fox News doesn't kowtow -- patrons of the arts.

They're an easy target, what with all their purchasing of expensive items whose meaning is beyond the likes of Watters and O'Reilly, as they freely admit at the end of the segment. The only person in attendance to whom the pair granted the benefit of the doubt was Sylvester Stallone, who purchased over $2 million worth of pieces at the event.

"Do you think they'd welcome O'Reilly down here?" Watters asked the "Rocky" star. "Why not, he's a work of art," Stallone replied.

The majority of the segment, however, consisted of Watters asking artists how much their work is selling for, then feigning being gobsmacked by their replies -- well, that and occasionally ask if he can touch the artwork.

He asked some of the artists why they "lean to the left politically," and the responses he received -- because "they love the truth" and "they are grounded in critical thinking" -- are clearly meant to be the punchlines for what passes for jokes among conservatives, like "If the left is so good at critical thinking, why have they made such a mess of the economy?" If that's not a promising premise, what is?

Watters did, albeit unwittingly, reveal just how much of the Republican agenda is based on unfounded, irrational fear. He asked one attendee about Syrian refugees, and that man replied, "I think any perceived threat of Syrian refugees is like worrying about sharks in the ocean."

"What if you get bit by a shark?" Watters replied, apparently unaware that the odds of being bitten by a shark are approximately 1 in 11.5 million, meaning you're more likely to win an Academy Award or Nobel Prize than be bitten by a shark.

And, of course, because this is Watters, he couldn't help but tap-dance on the line between inappropriate behavior and sexual harassment, telling a woman standing in front of statue-head, "Pretty nice bust."

UPDATE: Michael Anthony Farley, pictured above, wrote what is, to the best of his recollection, his account of his encounter with Jesse Watters. Needless to say, the distinction between Farley's memory and Watters' segment doesn't leave the latter covered in glory.