On International Human Rights Day, activists in NYC rally to welcome Syrian and Iraqi refugees to the U.S. 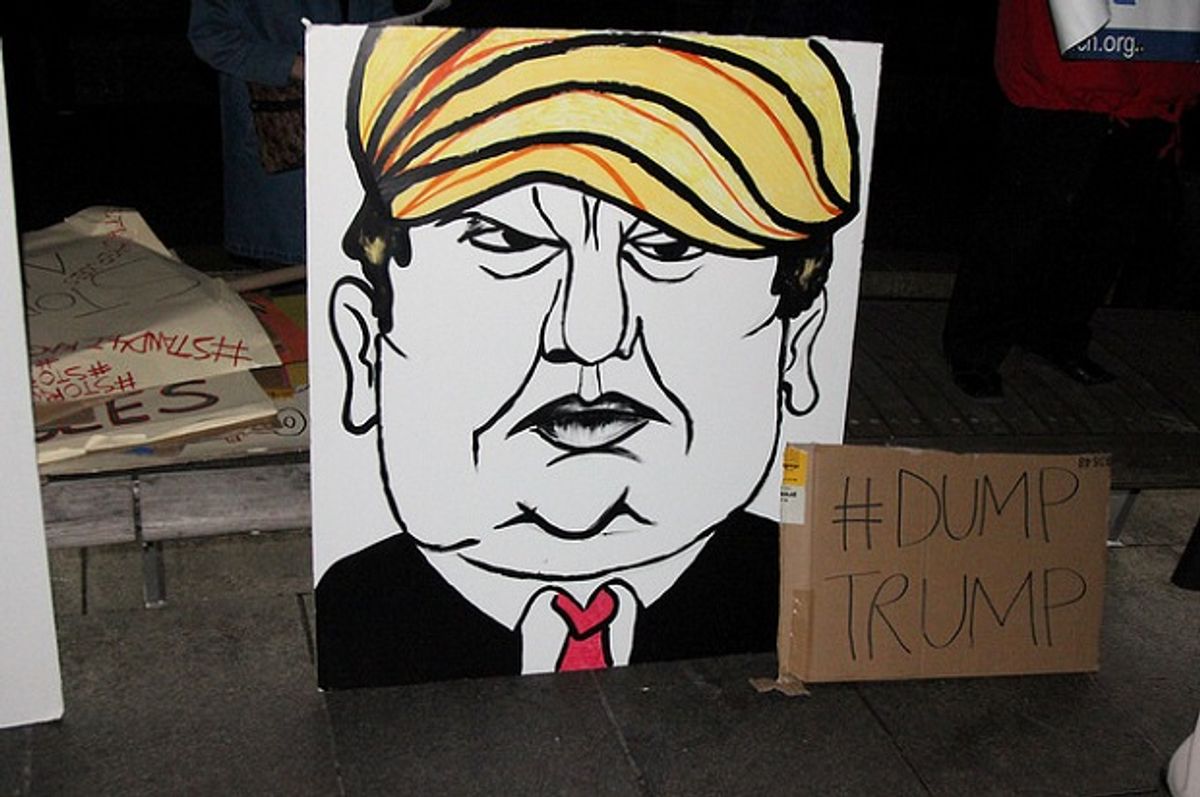 Hundreds of activists gathered outside of the Trump International Hotel and Tower in New York City's Columbus Circle on Thursday evening for a demonstration in solidarity with Syrian and Iraqi refugees. The protest was organized to coincide with International Human Rights Day.

The organizers of the rally said protesters were there "to say no to the harmful racism, Islamophobia, Arabphobia, and xenophobia towards the refugee community." An enormous coalition of groups endorsed the demonstration, including civil rights, migrant rights, leftist, anti-war, LGBTQ, Latina/Latino, Black, Jewish, Palestinian, Iranian, Desi, Filipino, and Greek organizations.

"Hate is not going to divide us," Linda Sarsour, executive director of the Arab American Association of New York, which co-sponsored the rally, told Salon. "People need to be held accountable for this hate speech. These are not just words; they are words that are inspiring actual violence against innocent people who have nothing to do with these terrorist attacks happening."

Sarsour stressed that, in the past few weeks, as presidential candidates like Donald Trump and Ben Carson have ramped up their Islamophobic rhetoric and proposed explicitly anti-Muslim policies, there has been a rapid increase in the number of attacks and threats against Muslim Americans.

Just in New York City in the past few weeks, there have been several hate crimes in recent weeks. A Muslim woman at a Brooklyn restaurant was assaulted by a customer who shouted "Muslim motherfu**er!" In another incident, a man in a Manhattan eatery screamed out hateful anti-Muslim rhetoric, hit a Muslim worker, and smashed two glass partitions at the food counter. In late November, a Muslim sixth-grader in the Bronx was attacked by her classmates, who called her "ISIS" and tore at her headscarf.

Similar attacks have been reported throughout the country. In one of the most extreme, on Thanksgiving in Pittsburgh, a man ranting about ISIS shot a Muslim cab driver with a rifle.

"This is not the first time people have done this in this country, and this is what scares American Muslims," Sarsour told Salon. "We've had the Chinese Exclusion Act; we've had Japanese internment camps. Tell that to young people in our community, who think that someone is going to come round us up. It's very traumatic."

"But I'm happy to be in a place right now, in Columbus Circle, with people who say 'Nope, not our watch,'" she added. At the rally, New Yorkers from a wide array of backgrounds made a conscious attempt to connect their various struggles to those of Syrian and Iraqi refugees.

One man had a sign reading, "Grandson of Jewish refugees says: Never again is now!"

One woman held a sign that read "'Welcome the stranger' -Basically the whole Bible. #RefugeesWelcome."

Activists from Jewish Voice for Peace (JVP), which is holding a week of protests against Islamophobia and racism during Hanukkah, lit a menorah at the demonstration, to commemorate the fifth night of the religious holiday.

"Love has no borders," "Racism is a crime against humanity," "Can you hear the beating heart of every refugee?", and "They become refugees because we bomb their home" read other signs. On Nov. 19, the House of Representatives passed the American Security Against Foreign Enemies (SAFE) Act. Although President Obama has promised to veto the bill, if it passes the Senate with enough votes, it will make it even more difficult for refugees to enter the U.S.

Numerous leading human rights organizations have said they are "deeply disturbed" at the "scapegoating of refugees" happening in the U.S. and Europe.

"At present, the U.S. government has agreed to accept 10,000 Syrian refugees. This is not enough," the organizers of the protest said in a statement. " We demand that the U.S. government accept more refugees from Syria and Iraq without intense background checks and to provide adequate resources and social services to these newly resettled refugees."

Many of the protesters emphasized that U.S. foreign policy has fueled the refugee crisis, and insisted the U.S. has not just a moral obligation to help the refugees, but also a political one that stems from its policies.

"The Syrian and Iraqi refugee crisis is directly tied to our service overseas," Andrew Johnson, a member of Iraq Veterans Against the War, an anti-war veterans group that co-sponsored the demonstration, told Salon. "We invaded, destabilized, and set off a sectarian in civil war in Iraq, from our invasion in 2003. And led to the foundation of ISIS."

Johnson said that, as a veteran deployed to Iraq in 2005 and 2006, he felt particularly "disgusted" by the anti-refugee and xenophobia rhetoric employed by politicians. "I feel like a lot of it is just hateful pandering," Johnson said. "The fact that this is working is really disheartening."

In a statement, the organizers of the demonstration said, "Further, we demand that the U.S. and all other governments cease their interventions in the Middle East and North Africa and their support of human rights abuses by repressive regimes."

"We also recognize that the Assad dictatorship is responsible for the vast majority of civilian deaths in Syria, and is engaged in documented torture and imprisonment of tens of thousands of its citizens," the organizers added. "We stand in solidarity with the popular movements which rise up against any repressive government."

"We absolutely have to take responsibility for" the refugee crisis, Sarsour told Salon. "Our flawed foreign policy in the Middle East has created the fertile ground for groups like ISIS and al-Qaeda. We can't act like we have nothing to do with that."

"We have helped to create the worst refugee crisis, but now we're saying, 'Nope, not in our country, we don't want you here,'" she added. "It's absolutely unfair, irresponsible, and unacceptable."