What else does this statement mean? “I don’t know if sand can glow in the dark, but we’re going to find out” 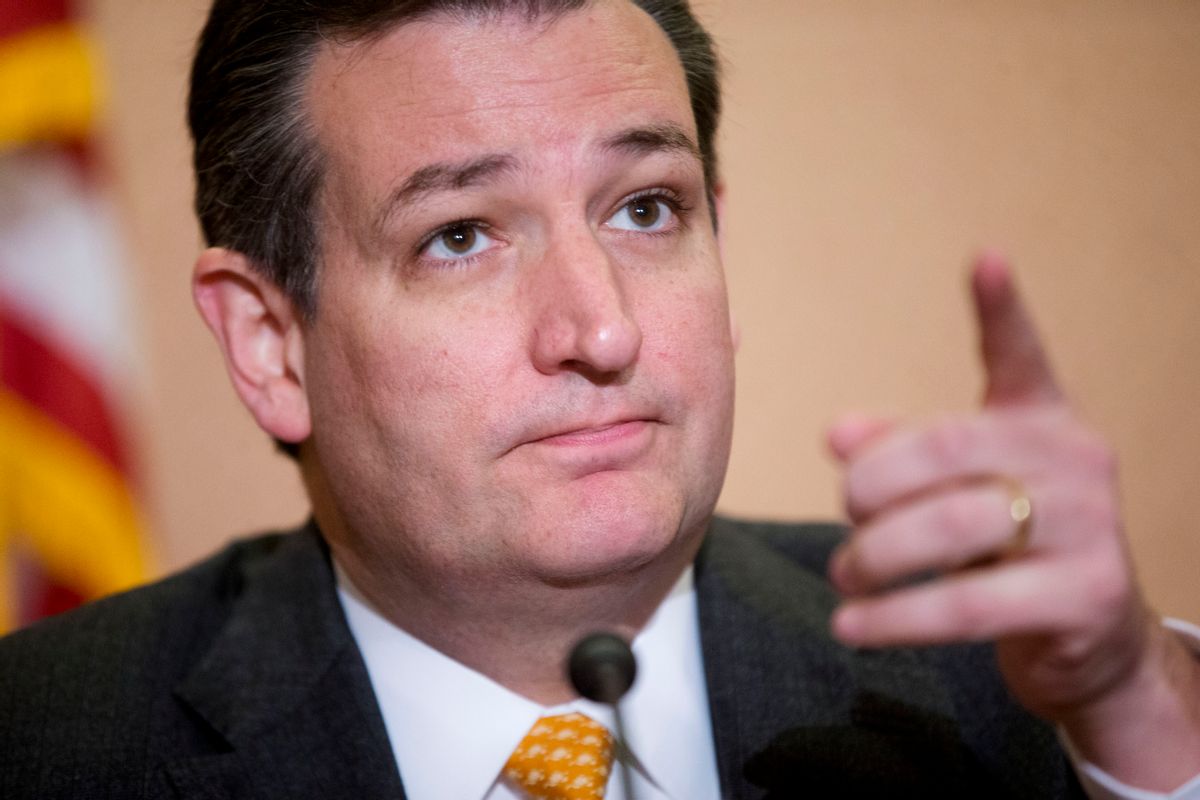 All of a sudden, Ted Cruz is a tough guy. The Texas senator and Republican presidential candidate has been in a fight with fellow 2016 hopeful Marco Rubio over national security, with the almost impossibly hawkish Rubio lashing out at Cruz for “weakening” domestic surveillance programs. Cruz has given as good as he’s got, throwing Rubio’s support for the disastrous Libya intervention back in his face, but it seems clear that Cruz is a bit rattled by the attacks and is trying to come off as more of a stereotypically bellicose Republican.

This shift has found expression primarily in how Cruz talks about the Islamic State. His new favorite bit of chest-thumping is his boast that he will “utterly destroy” the terrorist group. “We will carpet-bomb them into oblivion,” he says. “I don’t know if sand can glow in the dark, but we’re going to find out.” There are a couple of ways to interpret this, neither of which is particularly flattering. Sand “glowing in the dark” could be taken to mean that Cruz is suggesting the use of nuclear weapons, which would be the worst idea anyone has ever proposed. You could be charitable and say Cruz isn’t so crazy that he’d consider starting a nuclear war against a terrorist group, but I don’t know what else to make of the “glowing” remark.

But let’s be charitable and say that Cruz merely wants to use conventional weapons to “carpet-bomb” ISIS until they cease to exist. That’s also a bad and dumb idea. First of all, ISIS is not holed up in the desert sands – they’re comingled with huge civilian populations in major cities in Iraq and Syria. They do this precisely because the prospect of massive civilian casualties takes “carpet bombing” off the table as an option. Cruz knows this, but he also knows that “carpet bomb” sounds super-tough and macho, so he ends up saying things that make no sense. “I want to carpet-bomb ISIS,” he told NPR this week. “Now when you say ‘carpet-bomb cities,’ look, no – no reasonable military endeavor targets civilians.”

The air power component of Cruz’s anti-ISIS strategy has always been there. But he’s long been skeptical about the use of ground forces. “There are some politicians who like to support boots on the ground in every conflict across the globe in an effort to lean forward and show how tough they are,” he told CNN in November. “I don’t believe the answer is sending boots on the ground to Syria,” he said last month, arguing that we had no role in the civil war there. But now he’s coming around to a more receptive position on the use of ground troops. In a speech to the Heritage Foundation yesterday, Cruz signaled he was now open to the idea of sending American soldiers into Syria to fight the Islamic State. “You need a commander-in-chief who sets an objective of destroying ISIS, and then we need to rely on the expert military judgment as to the tools necessary to carry out that objective, including overwhelming military power, including arming the Kurds, and including using whatever ground troops are necessary to kill the terrorists and then come home.” (Cruz’s people are apparently trying to argue that intervening against ISIS in Syria does not count as intervening in the civil war, which does not make sense, given that ISIS is a key component of that war.)

It’s a lot of swagger and bluster from a candidate who often speaks derisively of other politicians who constantly seek to prove their “machismo” through bellicose rhetoric. But for Cruz, a more hawkish edge makes some political sense. Again, he’s under sustained attack from uber-hawk Marco Rubio on national security and clearly sees a need to blunt some of those criticisms. And he has a good reason for wanting to head off the “weak on national security” stigma – he doesn’t want to be the next Rand Paul.

Paul’s campaign – with its curious mix of conservative economic dogma and libertarian-ish foreign policy positions – was poised to be something of a crossover threat until the Islamic State’s rampaging began dominating headlines and focusing Republican primary voters on national security. The party swerved hard back to its neoconservative comfort zone, which was a crippling blow for a candidate who’d been highly critical of foreign interventions and bloated defense budgets. The “isolationist” label dogs Paul wherever he goes, and his efforts to shift rightward on foreign policy have succeeded only in alienating the libertarians who were supposed to be his base of support.

Cruz isn’t as vulnerable to these criticisms as Paul, but he still has to be mindful of them, given Rubio’s ability to set the terms of the Republican debate on foreign policy. And so he’s blustering about “carpet bombing” and warming to the idea of a ground war in the Middle East to keep the neocons from outflanking him on the right.