Welcome to Trumpland, Maine: What this small city tells us about the new politics of fear 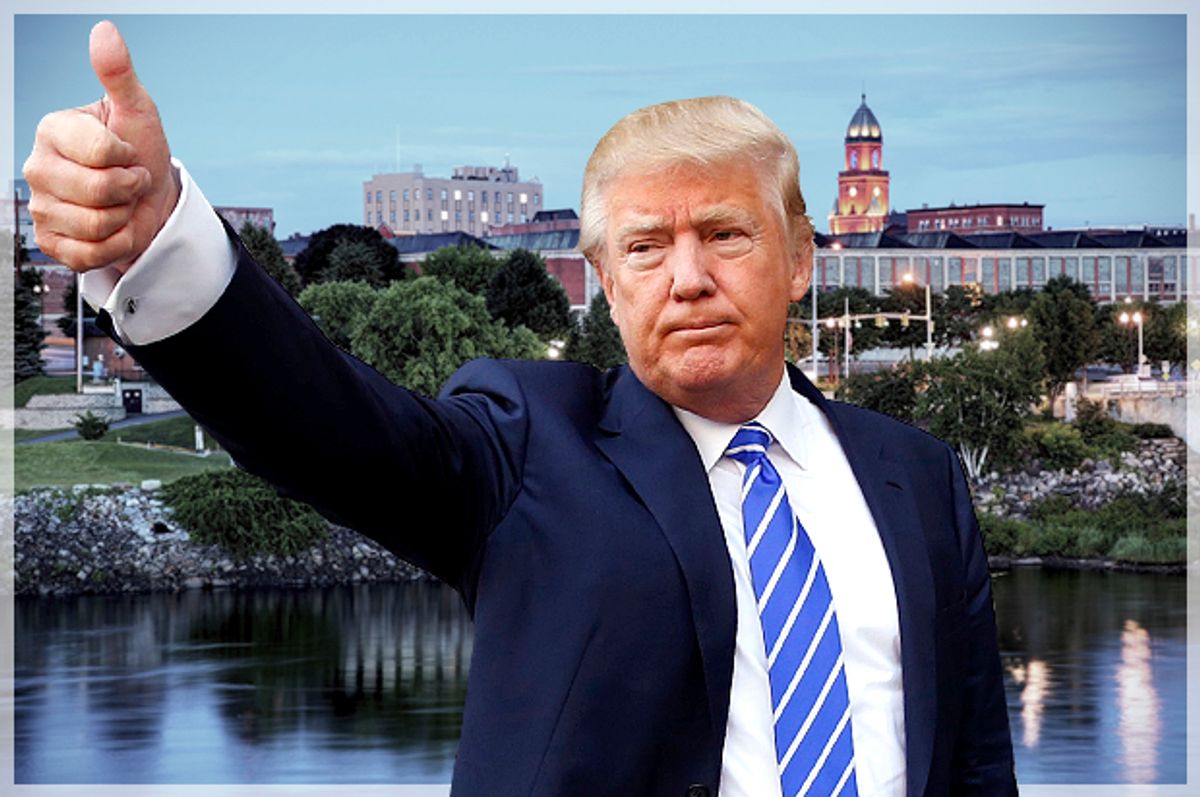 On Tuesday, one of the guests on Howie Carr’s Boston-based, syndicated talk radio show was the mayor of Lewiston, Maine, Robert Macdonald, facing a runoff special election against Democrat Ben Chin. Macdonald was his usual taciturn self, barely willing to respond to encouraging questions from Carr, a staunch conservative who happens to be from the state of Maine. Carr gave the Republican incumbent every chance to work the airwaves at the very moment that Lewiston voters were heading to the polls. Yet despite the fact that Macdonald “barely campaigned” for reelection, he beat Chin by a comfortable margin.

Lewiston is a fleck on the globe, a bleak Franco-American mill town struggling to accommodate a growing population of Somali and Somali Bantu refugees—now up to 7,000 by some counts, out of a total population of about 36,000. The New York Times covered Lewiston’s runoff for mayor because it was understood to be a proxy war between the Democratic and Republican parties. In short strokes, the race was a battle for America’s political soul. Tuesday night in Lewiston, the authoritarian position won, and a 60-ish white man who sticks to short declarative sentences strode to victory against a smart and talented community leader who’d worked out feasible plans to revitalize the community. The vote split along generational and racial lines.

Even on the local level, the outcome of this election was understood to be a harbinger of the 2016 presidential election. The comments celebrating Macdonald’s victory boil down to these sentiments: “We’re taking back our country,” and “Make way for President Trump!” Regarding Macdonald’s victory, one supporter commented: “Outspent by 15 to 1. Vilified in a coordinated smear campaign as a bigot, a racist, a homophobe, and a xenophobe. And still he wins. Please, please, please, at least until next November, permit leftists to remain blind to their delusion about representing ordinary Mainers.” To be sure, it’s a commonplace of the virtual sandlot for the victors to lord it over the losers. The crucial bit is that Trump has been repeatedly subject to the same criticisms as Macdonald, yet each time he vilifies the people of Mexico or calls for a registry for Muslims, he not only becomes more beloved by his supporters, he gains new ones.

This turn to the right is not a fluke. It’s the new politics of scarcity, a mind-set fearful of change in the face of global instability, devoted to keeping what’s mine and not sharing, now go away. This week in Lewiston, the city had a choice, and it chose a defensive position based on fear. Even as the city of Lewiston has, for the past 15 years, been a laboratory of social experimentation regarding the challenges of welcoming a full community of Muslim refugees inside a harsh economic climate, it is now illustrating the real-world consequences of inflammatory political rhetoric combined with no small amount of resentment aimed at the national political leadership-- those Washington insiders and Obama, the “outsider.” The Manchurian candidate. The Muslim. And even if it’s tempting to dismiss the xenophobic paranoia as a symptom of laughable ignorance, similar fears have abruptly flung the far-right party in France, the National Front, to a position of dominance in the country’s regional elections.

The National Front’s hard line against immigration and resurgent nationalism was decades in the making. The public’s attitude toward this formerly fringe party began to change in 1995, when the Plan Vigipirate was activated in Paris following the métro and RER train bombings. With each passing year, the fear and suspicion in the air intensified, and I watched with the eyes of a helpless American in Paris as Muslims in my neighborhood were harassed, and my Moroccan friends prevented from reentering the country to complete their graduate studies. Twenty years later, France’s far right now dominates the regional elections, and the daughter of a Holocaust denier, Marine Le Pen, is now a serious contender for the presidency.

To liberal progressives, Trump sounds like a dangerous idiot. But to large swaths of rural conservatives, he’s reinforcing their beliefs by speaking their language. Rural culture is oral and televised, not print and digital. On the television, Trump is everywhere—and the more outrageous his statements, the more airtime he gets. All the well-reasoned, gracefully written Op-Eds in the world will not change conservative minds convinced that Trump speaks Truth. Not as long as he keeps dominating radio talk and the TV. As summed up by conservative radio talk show host Rush Limbaugh, as quoted in the Washington Post: Trump “knows that a lot of Americans agree, to a certain extent, with things that he says,” Limbaugh said on his show Tuesday. “He also knows he’s the only one reaching those people.” By radio. Through Rush’s own show.

Consider the latest supposed gaffe by the Donald. In addition to doubling down on his calls to keep Muslims from entering the country, he also stated a plan to “close up” the Internet to prevent children from accessing it. The People of the Internet responded with derision and mockery, surely convinced that an online pile-on would shame him. To no effect. Because large swaths of rural Americans barely use the internet; they won’t answer the phone unless they recognize the number and will often ignore it anyway; they will not talk to big city reporters or to a college student holding a clipboard; and they don’t show up on political surveys. These are the people who hear their concerns being strongly validated by Trump, and all they need to do is to turn on the radio or the TV to hear him. So if Trump plans to close up that cesspool called the Internet? Good for him. Who needs it?

The disconnect between the urbanized imagination and rural realities is profound. Discouragingly, our worldview bubbles have hardened into boxes threatening to become prisons for the most vulnerable among us. Last night, 53 percent of voters in a Franco-American city reelected a conservative mayor in the name of “taking America back.” Who could have predicted that the land of freedom fries would be taking its cues from France, and the Republicans would be leading that charge?