We're destroying a generation of students: The disastrous effects of our student-debt blame game

After the financial crisis, we were more than willing to bail out banks. Why is the same not true of our students? 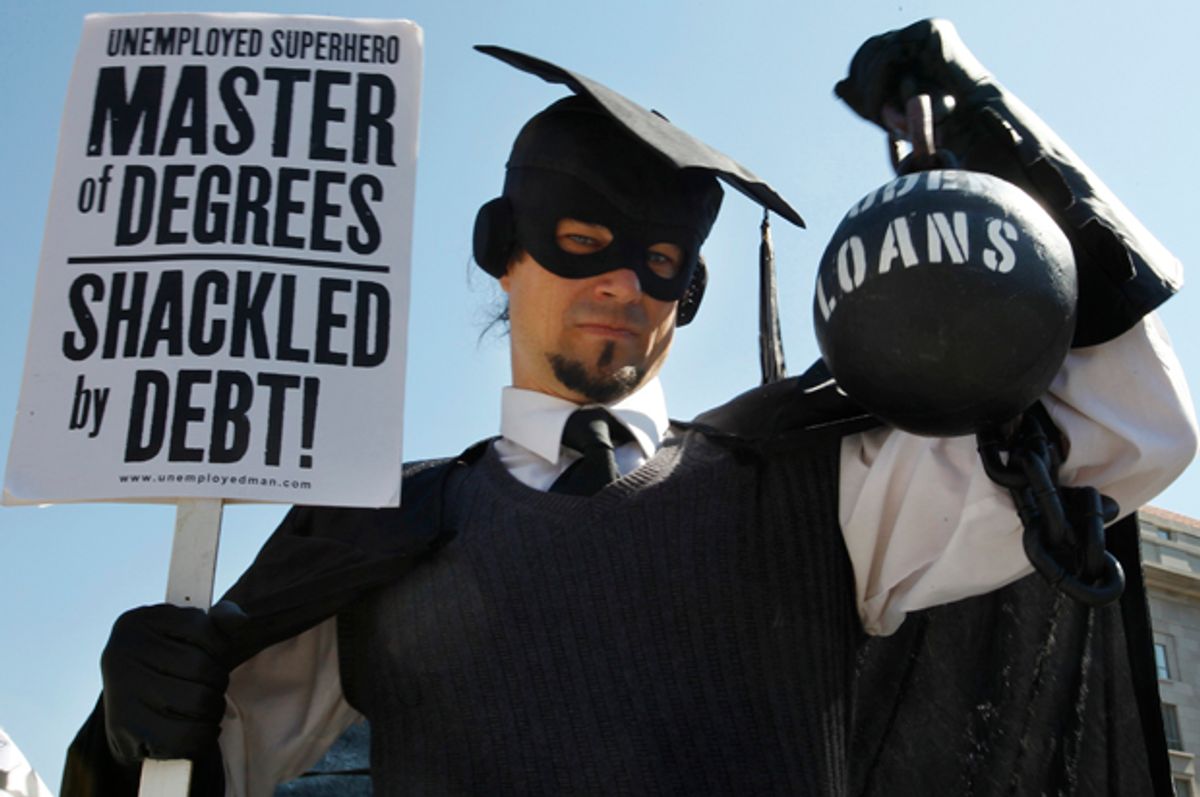 After three years of law school, I have $150,000 in student debt, compounding at an interest rate of 7 percent. I don’t regret a penny of it and am in the fortunate position of being able to pay my loans as they come due. But not everyone has been so lucky. Many of my fellow borrowers have gotten piled on, first with debt and now with blame.

Most recently, the debate about how best to manage the $1.2 trillion in national student debt has taken a disappointing turn—toward creating student eligibility standards for federal aid when we still lack basic institutional ones. In tone and character, this finger pointing resembles the blame heaped on mortgage borrowers at the start of the 2008 financial crisis. We would do well to remember what we learned during that period: not to blame hopeful homeowners but rather to question the banks who relinquished their lending oversight responsibilities while encouraging trading on speculative mortgage-backed securities. Similarly, instead of erecting hurdles for students deemed unfit to borrow, the government should aim its regulatory efforts at the predatory for-profit colleges that reap taxpayer dollars and hand out substandard degrees.

Yet experts have recently begun dishing out proposals ranging from disbursing loans based on credit scores, high-school grades and test scores to, more disturbingly, predicating loans on the earnings potential of certain majors. At best, this approach is duplicative of efforts already being made by legitimate, nonprofit institutions that select students using admissions criteria presumably designed to ascertain who will succeed under their degree programs. At worst, it inappropriately puts the government in the position of admissions czar, threatens to systematically disadvantage students with high ambitions but bad credit, and rations the immeasurable benefits of a quality liberal arts education to only those who can prove their ability to finance the risk.

Like encouraging homeownership, promoting education is more than a pragmatic national goal—our policies in this realm are weighted with symbolic significance about who is permitted to pursue the American Dream. Countless studies have shown not only that an educated population is the key to economic growth and national prosperity but also that education is the path out of poverty and that educational choice is critical to self-determination. Both our short- and long-term solutions to the current student loan crisis should be crafted with an awareness of these stakes.

The short-term solution is to focus squarely on suffering students and bail out those who most need help. This is a solution we readily provided to big banks but are oddly reluctant to offer students hoodwinked by predatory for-profit “schools” on our watch. The Obama administration’s recent decision to forgive $28 million in loans for 1,312 former Corinthian Colleges students exploited by the now-defunct for-profit chain is a laudable start, but more must be done. Specifically, while federal loans offer employed graduates options like forbearance and income-based repayment, there is little sympathy or flexibility for those who, despite their best efforts, are unemployed. That must change.

In the long term, we must zoom out on the problem, defunding—and punishing—institutions that promise students nothing but a future of debt. The best current proposal for financial oversight of non-profit educational institutions is the Students Before Profits Act of 2015, spearheaded by my state's senator, Chris Murphy, D-Conn., with the support of Senators Elizabeth Warren, D-Mass., and Richard Blumenthal, D. Conn., among others.

The good news: The bill aims to regulate non-profit institutions that act against student and taxpayer interests by holding institutions and their executives liable for misrepresentation, preventing institutions from persuading students to go into forbearance and artificially lowering their default rates, and cutting out repeat offenders by banning poor leaders from taking the helm at other institutions.

The bad news: The bill is currently pending before the Senate Committee on Health, Education, Labor and Pensions—chaired by Lamar Alexander, R-Ten., an outspoken supporter of the for-profit schools owned by his biggest campaign donors.

Bill or no bill, the most effective solution is the one not on the table: cutting off the steady stream of federal aid flowing into the pockets of for-profit colleges that reap 90 percent of their revenues from taxpayers. For-profit educational institutions are a quintessential example of the moral hazard problem: They take on federal-backed risk with the knowledge that students and taxpayers will be the ones to suffer while their own bottom lines swell. It’s time to accept that institutions that spend more on student recruiting than on student education and whose graduates overwhelmingly make less than high school dropouts are “schools” only in name, and that their loan-shark business model is inherently at odds with the goals of government educational subsidies.

On a last note, irrespective of an institution’s for-profit or non-profit status, withholding or misrepresenting information that students need in order to make informed decisions should translate into enhanced civil penalties, for the institutions themselves as well as their handsomely compensated executives. By this measure, non-profit colleges and community colleges are among those failing on the job. One obvious way to increase their accountability is to extend to them oversight mechanisms of the kind enumerated in Senator Murphy’s bill. All institutions of higher learning should be required to provide students accurate information about their retention, graduation and student default rates, and full transparency about employment prospects.

Correcting and deflating the student loan bubble is not the complex puzzle experts have made it out to be. To remediate our failed regime of educational oversight, we must focus on the defective products themselves and pull the plug on the for-profit fat cats peddling them. Anything less—in particular, blaming borrowers and brainstorming methods for disqualifying individual federal aid recipients—is a distraction masquerading as a solution.

Joseph Pomianowski is a recent graduate of Yale Law School.