Why we love to hate Coldplay: Admit it — the thing you hate most about this band is how much you really like them 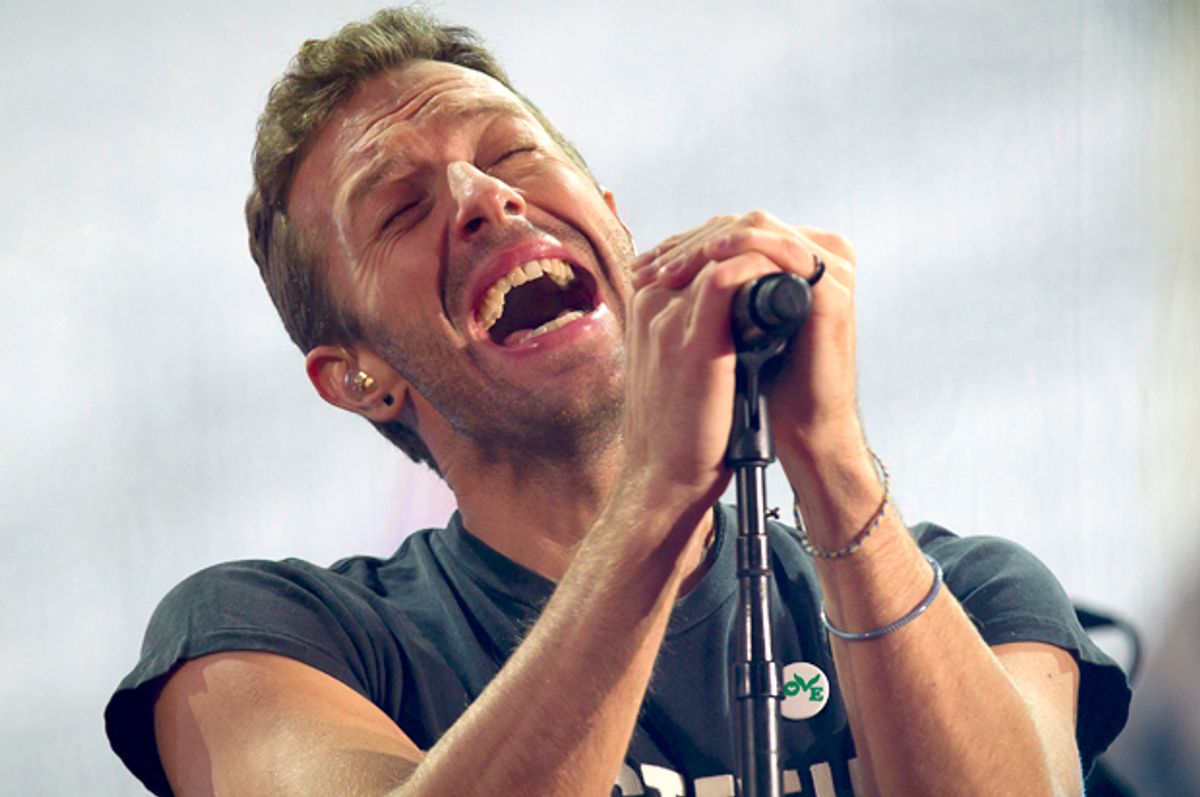 You are a person of refined tastes. You drink Scotch and enjoy the sounds of Deafheaven and Courtney Barnett. You surely are not the “type of person” who likes Coldplay.

If Fox News’ Jesse Waters once coined the term “Beyoncé voters” to describe single women, Coldplay's perceived fans might be best described as “Martin O’Malley voters”—middle-aged dads who think Starbucks lattes are cool and shop at L.L.Bean. They drive used Volvos and describe themselves as “environmentally conscious—I guess.” They like Radiohead and the Police; they’re not so unhip that they’d attend a Celine Dion concert, but they probably think Father John Misty is a wise Appalachian preacher with great stories.

If Coldplay is thought to be the musical equivalent of “dad bod,” this did not escape the notice of Twitter following the recent announcement that the British foursome would be playing this year’s Super Bowl halftime show. The jokes were so inevitable that they’re not worth repeating, but what’s notable about the adverse reaction to Coldplay is how reflexive it is. When I initially heard that the band was releasing a new album—with the incredibly on-brand title "Head Full of Dreams"—I loudly groaned: “Ugh, why?”

That was actually a very good question: Why did I hate them when—after I thought about it—I actually didn’t? I really enjoyed two Coldplay albums (“A Rush of Blood to the Head,” “Viva La Vida”), had warm-to-positive feelings about two more (“Parachutes,” “Xylo Myloto”), and only actually disliked two (“X&Y,” “Ghost Stories”). And even their worst albums have their high moments: If “X&Y” is a U2 tribute by way of self-parody (with “Speed of Sound” marking the band’s worst single to date), the record is not without its high moments. “Fix You” marked Coldplay’s most overt embrace of arena rock yet—grandiose emotions designed for stadium-sized consumption—but for all of its treacly lyrics, the song is genuinely touching.

Chris Martin and his band appear to have what BuzzFeed’s Anne Helen Petersen called Anne Hathaway Syndrome—aka “when you do everything right and society hates you for it.” The comparison is apt: Like Hathaway, Coldplay really, really cares what you think. The "Les Miserables" actress famously apologized for her 2013 Oscar dress—which showed clearly visible nipplage—while Martin acknowledged that he’s not the best writer: “We know our lyrics are a bit shit.” Anne Hathaway likes to self-deprecate on Twitter, calling herself “Annie” while reminding followers she’s just like you. And in a 2011 Billboard interview, Chris Martin compared his band’s music to a “good sandwich.”

We like that down-to-earth lack of pretension when it comes from Adele or Taylor Swift, whose brand is built on reminding you that she’s not the biggest star on the planet but your best friend, but we apparently do not like it in our rock stars. Coldplay’s critics especially do not like it when it comes from a handsome 38-year-old millionaire who is friends with Jay Z and Beyoncé and was married to an A-list movie star for more than a decade. What does Chris Martin have to be so sad about all the time?

But even more than the Hathaway parallel, the band’s play for mass appeal over critical applause is reminiscent of Nickelback. In a famous dig at the band, Thom Yorke once described Coldplay as “lifestyle music,” and he’s right—but not in the way he means. With the death of Nickelback, Coldplay is the closest thing rock music has left to a “statement band.” Disliking Nickelback doesn’t demonstrate your learn’d knowledge of the Chad Kroeger discography, and most people who hate them wouldn’t be able to name a single one of their albums. As in the case of the O’Malley voter, it’s a declaration of one’s values in opposition to a perceived “Other.” This time, it’s people with Confederate flag tattoos and shotguns in the back of their pickup trucks.

What separates the two acts is that, like it or not, Coldplay was a critics’ band—following the smashing success of 2002’s "A Rush of Blood to the Head." The group had its detractors (notably Pitchfork and New York magazine), but it earned raves on both sides of the Atlantic—from NME, Entertainment Weekly, Billboard and the Onion A.V. Club. It was voted one of the best albums of the decade by Rolling Stone (at #21), and even “X&Y” was better received than you might think: Blender called it the band’s “masterpiece,” while Q magazine felt it was Coldplay’s finest record yet.

Until the current EP, every single one of the band’s records received positive reviews upon release—with “Ghost Stories” reaching a relative low point in the band’s critical and popular acclaim; their sixth album notched just a 61 on Metacritic, while their first four records all scored above 70. Three of Coldplay’s records have been shortlisted for Britain’s prestigious Mercury Prize, while 2008’s “Viva La Vida” became the biggest album in the entire world, selling 10 million copies. They’re the rare band that can open Glastonbury, star in an iTunes commercial and get covered by Willie Nelson in a Chipotle ad.

But what bothers the Independent’s Andy Gill is that—despite the band’s success in just about every way we define success—he genuinely has no idea who Coldplay’s followers are. “Who are those masses politely arrayed in their thousands at stadiums when Coldplay play?” he asks. “Is it some secret society, an Opus Dei of dreary anthemic music?” While Gill insists that the band’s fans are no one he knows, he seems to know the answer to his own question: The most irritating thing about Coldplay isn’t Chris Martin’s much-criticized falsetto or their embrace of lyrical Velveeta, but that they appeal to everyone while seeming to appeal to no one.

In a must-read breakdown of the band’s discography, the Onion A.V. Club’s Sonia Saraiya—now Salon's TV critic—argues that “Coldplay is the closest thing to a musical monoculture that exists anymore.” This is not an accident. Many bands use massive success to get weirder and more insular: After winning Grammys, Arcade Fire decided to ditch their signature sound and make an LCD Soundsystem record, while M.I.A.’s underrated "Maya" was all but a middle finger to fans who were looking for another “Paper Planes.” But according to Saraiya, Coldplay became “a group of men in the business of making Coldplay continue to sound like Coldplay.”

Like U2 before them, Coldplay has always stressed universality, a kind of open space in their music that allows the listener to project their own fears and desires into the lyrics. On “Talk,” the third single from “X&Y,” Martin asks: “Are you lost or incomplete? Do you feel like a puzzle, you can't find your missing piece?” These sentiments are nondescript enough that anyone can identify with them, and following “X&Y,” the band’s sound began to follow the same template—incorporating Afropop, Japanese and R&B influences for a distinctly global sound. Of all people, John Mayer described it best in a 2004 Spin interview: “They’ve found a way, identity-wise, to be from everywhere.”

That’s precisely why Coldplay makes such an oddly perfect choice for the Super Bowl: The NFL’s championship game is the most-watched night of television of the year. It’s the one evening when all of America is huddled around TV screens--and in an era where the NFL is pushing to expand its appeal abroad, it may be soon be the event the entire world is watching. Coldplay doesn’t just bring together Japan, Europe and the U.S., it forces Lynyrd Skynyrd fans, Volvo drivers and single ladies to admit that they have more in common than they might like to think they do.

When you and your grandmother are both nodding your head to “Yellow” on Super Bowl Sunday, you’ll be forced to admit that the thing you hate most about Coldplay is that you actually really like them.