Follow Bill Maher's lead, not Donald Trump: There's a way to critique ideology behind religion without resorting to hate

The First Amendment protects speech and religion. It can and must be used to critique all religions, without fear 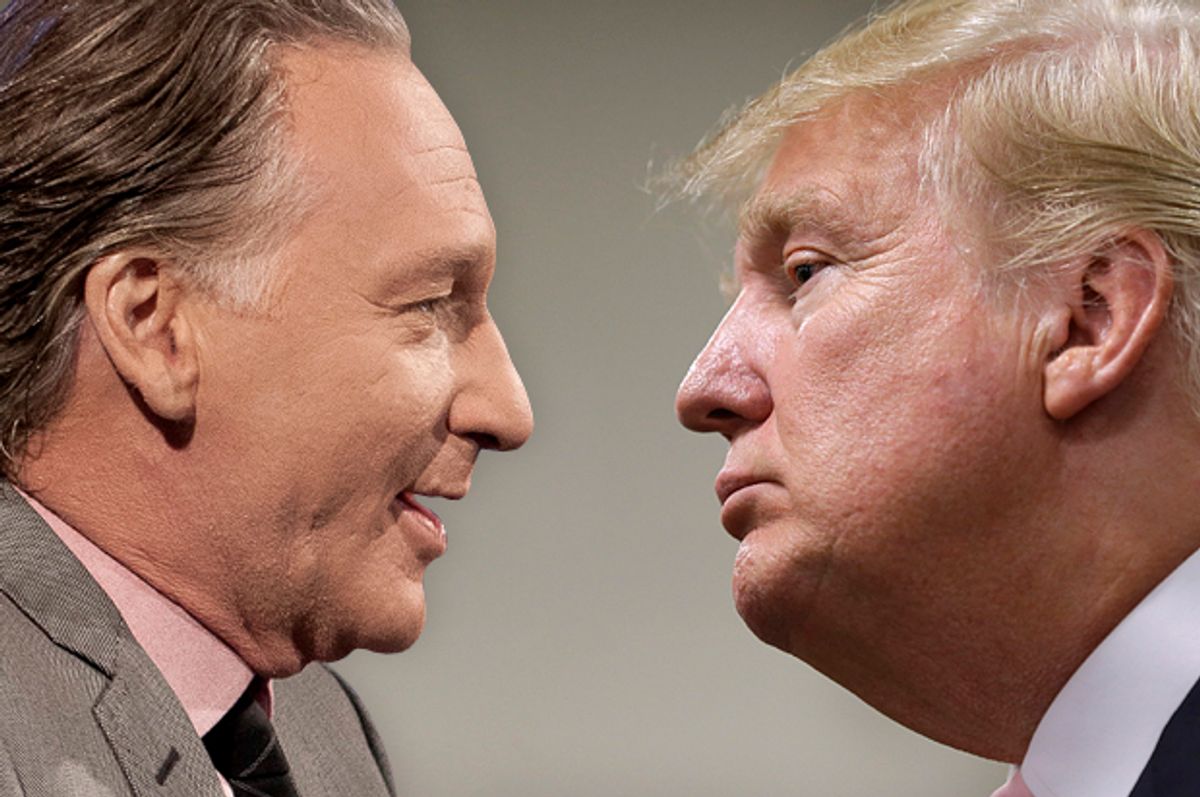 After the Islamist terrorist attack in San Bernardino, with more like it probably in the making, and with Donald Trump issuing wildly inflammatory exhortations to enact a "total and complete" ban on Muslims entering the United States, we need clarity about Islam, and fast. Now more than ever, lives are at stake.

Yet Islam has long provoked little but confused, misleading commentary from well-meaning journalists, especially those eager to side with the oppressed and show solidarity with the downtrodden.  In the West, the 1,400-year-old faith serves as a guiding light for its predominantly (nonwhite) adherents, who come from lands with histories of colonialism and often suffer discrimination from the various, mostly white European and North American societies in which they dwell.  Not surprisingly, as a result, Islam has secured a place in the identity politics of our time.  Criticize Islam, and you are perceived as attacking a minority community, which leaves you open to charges of racism.

More specifically, the charge is usually of "Islamophobia," which feebleminded thinkers equate with racism, though Islam is neither a race nor an ethnicity, but a religion with devotees of all skin pigments on every continent.  Criticize Islam -- its doctrines of jihad and martyrdom, its accordance of second-class status to women, for instance -- and you really are attacking an ideology.  Yet our reigning state of politicized hysteria and linguistic decadence ensure the word, which is nothing but a shoddy semantic ruse inimical to free speech, lasting currency and even a sort of vogue. True freedom of speech, however, means being able to criticize the most contentious subject of all -- religion. There is, thus, nothing "phobic" about attacking Islam. We all are, or should be, perfectly free to attack Islam, or, conversely, to laud it.  It is just one religion -- that is, ideology -- among many, and all religions are fair game for critics.

Nota bene: The word is "Islamophobia," not "Muslimophobia." "Islamophobia" specifies as the object of fear the religion itself, not Muslims as people.  Journalists who level charges of Islamophobia may hope to denounce harassers of Muslims, but in fact they are serving as useful idiots for Islamists by helping squelch debate about Islam, as though Islam could not possibly arouse antipathy except among bigots and other backward folk.

This is decidedly not the case. Islam is a universalist religion envisioning global triumph, with all humanity called upon to submit to God (the meaning of "Islam" itself), Sharia, and a much-anticipated Judgment Day, when nonbelievers will find themselves roasting in hellfire.  Any liberal should find plenty therein to object to, to put it mildly. A religion that demands we all submit to it deserves to be critiqued by all -- and vigorously, no matter what identity politics and political correctness say, and no matter how loudly Trump fulminates against it.

Thus I now find myself obliged to examine a report in Vox by Max Fisher, "It's not just Trump: Islamophobia in America is spiraling out of control." Fisher's piece, published just before the San Bernardino attack, purports to examine the growing problem of anti-Muslim harassment in the United States, but it decries as "Islamophobes" all, including liberals, who dare raise a voice against Islam per se. Of the inherently divisive dogma that forms the basis of both "mainstream Islam" and the faith's radical, ISIS-type interpretations Fisher says not a word. Islam's critics, as he would have it, are just bigots and have to be exposed as such.

Fisher opens with a look at the recent disruptive scene in a community forum in Fredericksburg, Virginia, that ensued when an outraged local shouted down a Muslim resident hoping to discuss a zoning permit for a new Islamic center, calling Islam an "evil cult" and all Muslims "terrorists."  Fisher then brings in Donald Trump and his plans for a Muslim database, noting that Trump was "merely indulging a sentiment that was already widespread." Fisher offers us the confused, deceptive definition of "anti-Muslim hatred and fear, a form of bigotry known as Islamophobia," I have presented above, and warns that it is "rampaging out of control," with "very real and legitimately scary implications for the millions of Americans who follow Islam."

Fisher cites other instances of anti-Muslim harassment (intimidation, vandalizations of mosques, and assaults on Muslims), but then describes the February 2015 Chapel Hill murders as "a sign of the growing hatred toward Muslims in this country." For Fisher, the "climate [of Islamophobia] had allowed the murders to happen . . . and let them go initially ignored." Yet to date prosecutors have not labeled this a hate crime. As far as we know, the unhinged North Carolina atheist killed three young Muslims in his apartment complex over a parking space, not because of their religion. The Chapel Hill tragedy still appears to be what it looked like at the time: a massacre carried out by an unbalanced person for trivial reasons, in a country awash with firearms. It cannot be adduced as proof of "Islamophobia," in other words.

Fisher then piles on statistics about Republican belief in Obama's alleged Muslim faith, the widespread fear of Islam and Sharia among Republicans, and more, including a poll showing that "56 percent of Americans see Islam as at odds with American values."  All this, he says, is evidence of a "concerted and deliberate campaign to promote anti-Muslim fear and hatred," and one that, after the Paris attacks, has resulted in a reluctance to admit Syrian refugees to the United States.

Animosity toward Islam, for Fisher, is little more than witless prejudice. Never mind that Americans, for a decade and a half, have heard constantly of the atrocities committed in Islam's name the world over: the slaughter in Paris, the bombing of a Russian jet in Egypt. The methodical execution of sunbathing tourists and the assault against museum-goers in Tunisia. ISIS beheadings of American journalists and countless others.  Boko Haram's lethal raids and its kidnapping of hundreds of schoolgirls in Nigeria. Shootings in Fort Hood and Chattanooga. Bomb blasts in Madrid, London and Bali. The thwarted attempt to blow up airliners using liquids smuggled aboard, the "underwear bomber" and the "shoe bomber."  Sept. 11, 2001.

By no means is this list complete.  Islam is, say the data, the main motivator of terrorism globally.

Fear of terrorism carried out by jihadis springs from this tragic roster of blood and grief and enhances prejudices some Americans have against those who profess a faith alien to them, who may dress differently, and who may be nonwhite. How can Fisher fail to see or acknowledge such a self-evident truth? That President Obama cannot bring himself to name Islamist ideology as the wellspring of all this bloodshed only worsens matters, and surely convinces many that he is being less than forthright. Even in his post-San Bernardino Oval Office address, he avoided calling out jihadism, but instead spoke of "the dark path of radicalization" and a "perverted interpretation of Islam that calls for war against America and the West" and assured us that "ISIL" -- ISIS -- "does not speak for Islam."

Well, ISIS disagrees, and there exists no supreme Muslim clerical authority to decree otherwise. If jihadis do not speak for all Muslims, jihad, including violent jihad, is nonetheless Islamic, as is martyrdom. The United States is at war with jihadi, fundamentalist Islam is what President Obama should have said. Fisher's Islamophobia piece never addresses this, and it is the crux of the issue.

Fisher then casts as bigots those who object to the manifold illiberalities associated with Islam (think the treatment of women, gays, and apostates, for starters). He reviews a number of highly publicized clashes between Islam's critics and Islamist apologists (instances I've been writing of in this column for the past year), and concludes that "America's resurgent Islamophobia is in many ways a media story" that leads us to believe "the rise of ISIS in the Middle East . . . is an indictment of Islam itself, a sign that Muslims are less human and somehow more violent."

Well, once we dispense with the preposterous claim that ISIS is not Islamic (read this, if you have doubts) and identify Islamist ideology as the problem, we do not need to address crude generalizations about Muslims being "less human and somehow more violent." We discern the dilemma facing us -- that Islamist ideology is Islamic, but not espoused by all Muslims, so we have to counter Islamism, not all Islam, without alienating all Muslims. The "Islamophobia" debate is only a distraction from this, the real issue at hand.

Fisher tendentiously summarizes contentious CNN interviews (including one with Reza Aslan, who called female genital mutilation an "African problem" -- wrong, the barbaric practice persists in at least 29 countries of the Muslim world) and chides journalists for doing their job, for asking frank questions about the relation between Islamic doctrine and violence. He also calls Bill Maher's poll-supported assertion that most Muslims "have too much in common with ISIS" a "rant." No matter that the stats bear Maher out.

Again, the debate is not about that, as I've just stated. In any case, we know that the believers of today can wise up and become the atheists of tomorrow, as the Ex-Muslims of North America can attest.  We can and should object to the various retrograde Islamic doctrines noted above, without, obviously, harassing Islam's followers.

Those assaulting Muslims are engaging in criminal acts and should be prosecuted; those who express bigotry against Muslims as people deserve opprobrium.  But those critiquing, however vociferously and irreverently, the illiberal doctrines of Islam and the bloodshed carried out in its name stand well within their First Amendment rights and merit no name-calling, the leveling of no spurious charges of "Islamophobia."