My NYC parenting nightmare: It's either hell or Larry David

When I decided to have kids, nobody warned me about innermost circles of New York hell: subways and other people 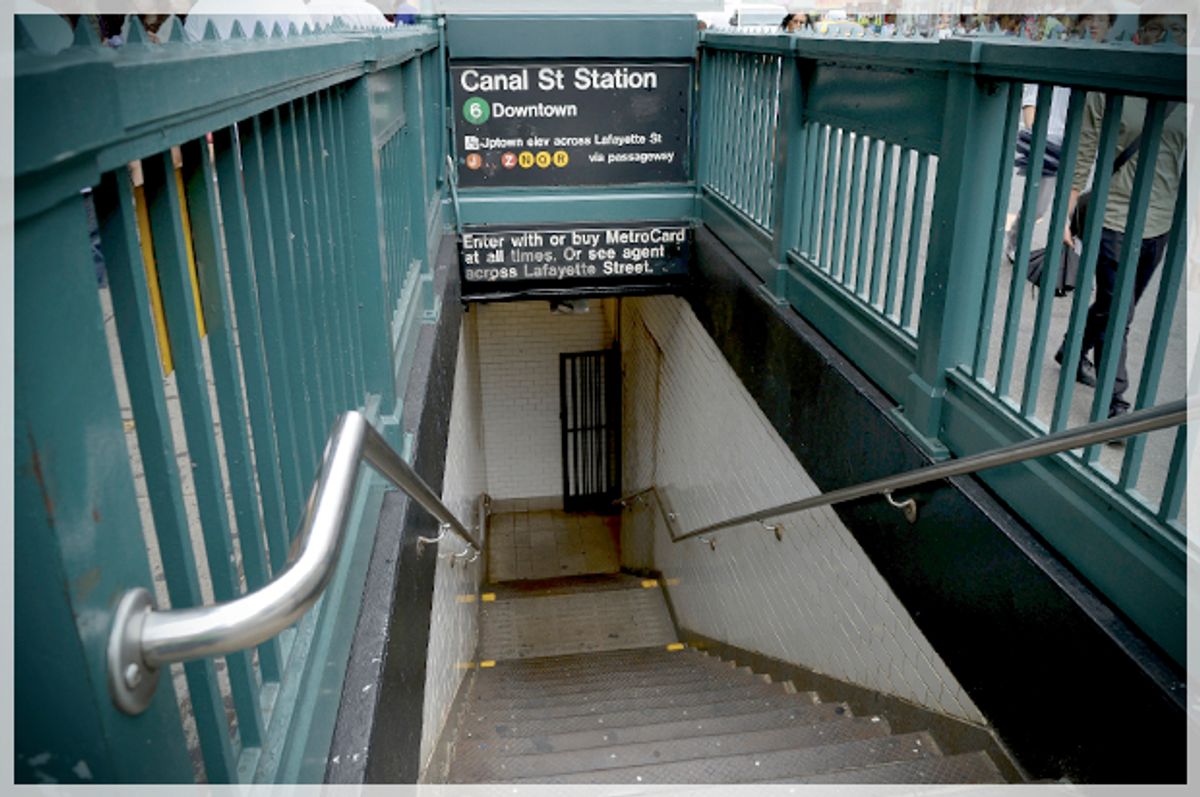 Several months ago I climbed into an ascending slow-motion urine oven, otherwise known as an MTA subway elevator. I had just pushed my 2-year-old’s stroller onboard when a rather angry-looking male little person followed us on. As the broiling metal cage began its snail-like rise, the standard stench threatened to close my throat, and I noticed the man inching closer to my child – a menacing scowl on his face.

Trapped in a small space, unsure of what to do, I nervously began chattering to my toddler, and found myself saying, as I do 800 times a day to my son: “Hello little man! Who’s the little man? Where’s my little man?”

As I felt the man’s eyes glare a hole into my idiot skull, I prayed that when the doors slid open we’d all just be attacked by coyotes so as to end the agony of the moment. And yet, as mortifying as that Larry Davidian experience was, I would willingly live through it again and again, every day if need be. If only so as to avoid the grueling process of heaving my 40-pound child and stroller up the subway stairs.

There are many things I have noticed in my years of riding the subway. I have noticed the wonderful way it allows me to live without an automobile. I have marveled at the magic of walking into a hole in the ground in Brooklyn, and then 20 minutes later emerging out of another hole, straight into the bustle of the East Village. I have noticed the Job-like patience of the subway workers, as they daily face the questions and screams of tourists and lunatics alike.

I have also noticed other things. Like the way a breakdancer’s heel flies inches from my nose when it is “show time.” I have noticed rats racing on rails, and of course reams upon reams of ads. (After more than a decade of riding the train, I feel certain Dr. Zizmor is one of the five people you meet in heaven.) And I once noticed a woman using a train window as a mirror, so as to painstakingly apply lipstick, seeming to pay no heed to the fact that, while her full crimson pout was lovely, she had very clearly wet her pants.

In short, the New York City subway is nothing if not Poetry in Motion.

But something I had never really noticed before becoming a mother was the state of subway elevators. Before I had a child, I merely allowed myself to be shoved up a flight of stairs in a roiling sea of humanity like everyone else. It wasn’t until I had a kid that I realized what a soul/spinal column destroying pursuit it is to navigate the train with a child and stroller.

I had been warned about so many aspects of parenting. When people winked and said, “Say goodbye to sleep!” I smiled and nodded. Of course, I didn’t realize I’d be so exhausted and delirious that upon hearing my baby’s cries one night, I would rise from my sheets, stumble to my closet, and rake all of my clothes to the floor, convinced I had put my infant to bed on the sweater shelf.

When you’re about to become a parent you’re deluged with tips and advice on how much it will change your world. But no one ever really mentions how much it will change the way you move through the world. No one ever said, “Enjoy that Delta flight where you get into a shouting match with a stranger regarding the best use of floor space in the bulkhead.” No one said, “Have fun in the café when your son pulls the entire Valentine display to the floor, leaving a pile of red porcelain shards -- literal broken hearts -- shattered at the cashier’s feet.”

Before I had a child, I never really gave much though to how one navigates places with a wee one in tow. Occasionally I would notice it, like when I was trapped on a narrow sidewalk behind a double stroller that was moving like it was helmed by an underwater zombie. Or when I was in a restaurant and someone’s toddler threw their eggs to the floor in disgusted horror, like they’d just been served Santa’s carved off nose on toast.  Back then I was all smug irritation, quite certain I would never bring about such annoyance to my fellow man. And lo, now watch me go, as I accidentally roll my City Mini’s wheels over a gasping woman’s toes, battling my way off a packed N train…

The MTA subway system has about 88 elevators. Which actually doesn’t sound that bad, until you consider that there are 469 stations. And of the elevators that do exist, about half appear to be “under repair” on any given day. Want to weep openly in public at 10 a.m.? Take your kid on the F to Lexington Avenue and be greeted with an “Out of Service” notice on the elevator. The stairs out of that station are but a Sisyphean incline leading to Everest. Godspeed.

I quickly learned that to navigate the subway with a small child is to rely completely upon the kindness of strangers. Which, to be frank, is a roll of the dice. I have certainly encountered loads of gallant men and women who have rushed to help me heave my son and stroller up or down stairs. These people give me faith in humankind, and if I could send them all wine and the phone number for my chiropractor, I would. I am especially touched by the offers of help from petite women in heels who probably have the same upper body strength as my toddler, and who could probably ride comfortably in my stroller themselves.

But for all of these generous souls, there are an equal number of people who will stand at the bottom of the steps and watch me perilously teeter -- small human in my clutches -- as I perform a delicate dance with gravity. These folks will just stare, like I am a mildly amusing, overly sweaty act from Big Apple Circus.

I realize there will be many who will tell me to shut my yap; the subway wasn’t built for crying babies and clunky strollers, and my son and I should just enjoy the patch of blue sky we can see outside our square of apartment window and call it a day. We can see the Natural History Museum when he’s in college. My stroller isn’t their problem!

This isn’t something one only experiences in the city, of course. Guiding a small child through the world is both wonderful and terrible no matter where you’re doing it, be it Home Depot or Grand Central Station. On the wonderful side, your little one shows the world to you anew, and the mundane can become miraculous. Behold the excitement and wonder of the escalator! Moving stairs! That disappear in the ground!

On the terrible side, it is now your job to keep your child’s squirmy fingers and toes from being sucked into said escalator, or keep them from any sudden movements that might send the person behind you crashing to their death. Because that person behind you is frowning. Like a lot of people you encounter. In airport security lines, grocery lines, basically any kind of line -- there will be downturned mouths conveying their displeasure. Because you are slow, and weighed down like a mule, and your child may or may not be emitting a yowl that makes everyone, yourself included, want to do a shot of bourbon.

But along with these frowns, you also get loads of smiles, and offers of help. There are people who pat your son’s head and ask him his name. Sweet old men in bodegas who offer him age-inappropriate candies, which you accept and then later eat yourself.  Strangers who offer to hold his little hand while you scramble to put on your shoes and grab your carry-on. There are people who remember that all of us, at one point in this life, were curious and covered in crumbs and trying to pull a pyramid of plantains to the floor.

That said, I do not expect people to assist me. I don’t assume someone will be delighted to heave my stroller. I chose to procreate in a city without owning a car, and that is my choice. However, as the MTA appears to have fare hikes with more frequency than I wash my own hair, I’m merely wondering if they could perhaps spring for a few more large metal boxes that move up and down? Or maybe just fix the ones that already exist? Could they maybe pull together enough scratch so that the physically challenged and children can more easily take in the many pleasures of our fair city? Or at the very minimum, make a trip to the allergist without it feeling like a highwire act Philippe Petit would cower from?

I couldn't care less about the state of the elevators. I will happily stand in mysterious liquids and inhale unnamable fumes that make my eyes tear. I have no problem teaching my child to push what I privately refer to as the “Ebola buttons” with his elbow. And I don’t care if the mechanism itself is so slow that my son has already moved into a new developmental phase by the time we reach the mezzanine.

I will eagerly pile in with 14 other people, and stand with my nose buried in someone’s bangs. I’ll even share the space with those clearly able-bodied people who sprint like gazelles to squeeze in, rather than using their gazelle strength to spirit themselves down the stairs. While I will quietly wish for anvils to fall upon the heads of these people, I will still politely make room for them.

We are all stumbling around on this dirty, beautiful, floating rock together: the quick and the strong. Little children. The elderly. The physically challenged. The texting. And most of us are rushed, and in need of a muffin, and just hopeful there’s a couch in the near future. Sometimes when I think about it, it’s amazing we do as well as we do, and people aren’t just sashaying into traffic or body-checking each other at Target.

As I guide my little boy through the world, I try to remember to be patient, not just with others, but with my own bungling self. Because I really believe that no matter where we are -- city or suburbs -- most of us truly want to be respectful of others’ space. We want to share our little stretch of planet with other humans. And we’re all doing the best we can. (Except for that guy in Barnes & Noble clipping his nails in the memoir aisle. I’m pretty sure he doesn’t give a fuck).