With an increasingly diverse demographic, demanding a more diverse faculty is reasonable 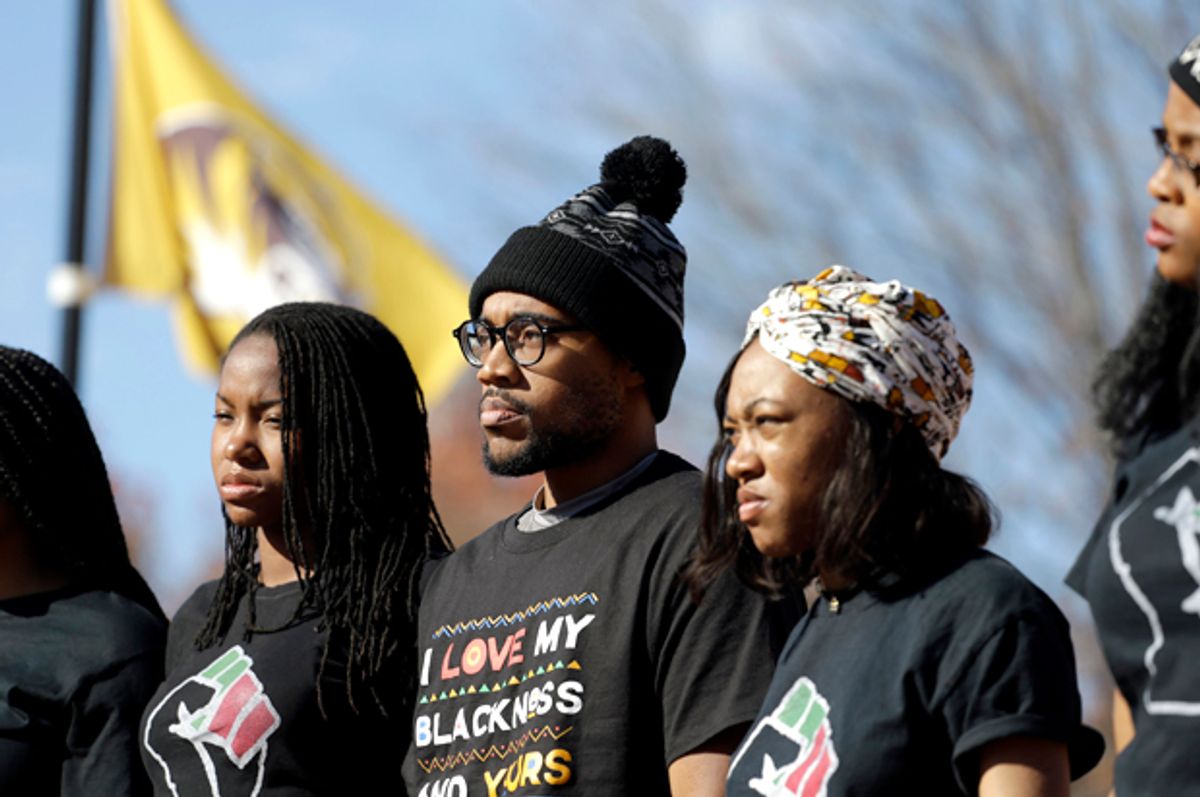 Today students who dare to voice complaints about racism on campus are more often than not slapped with a number of easy-to-use, prefabricated labels that take the place of actually seriously addressing the issues being raised. They are called “coddled,” “politically correct,” "spoiled," and at the same time “terrifying” to “even” liberal professors. Students are collectively stigmatized with these labels and also considered whiney narcissists.

Now a new study by FiveThirtyEightPolitics, “Here Are the Demands From Students Protesting Racism at 51 Colleges,” has sorted through the list of issues collected on the website “The Demands.”  It found that at the top of the list of the 13 most common demands were:

Thus, instead of students censoring, chastising, silencing those whose pronouncements they find “threatening their safety,” we find a set of proposals to bring the university more into line with an increasingly diverse demographic. It’s worth noting as well that many faculty and some administrators are in favor of these top two demands, and in fact what students are asking for in many cases are simply enhancements to already existing programs. And contrary to the now common depiction of students as driven solely by passion and emotion, another major request was for better data collection. So where is the problem? Why are these demands unreasonable? If the issue of censorship has been grossly inflated, what is so troubling about the real core of the demands?

One of the most laudable functions of higher education is to facilitate upward mobility and increase inclusion of underrepresented minority populations — to, indeed, democratize society. Lamentably, this function has been mostly ignored, downplayed or deferred when it comes to race.

In his book “Creating a Class: College Admissions and the Education of Elites,” professor of education and sociology Mitchell Stevens explains how colleges and universities have been sites of what he calls “social reproduction,” that is, the perpetuation of privilege. To understand this phenomenon he studied college admissions. What he discovered was a place of “privileged families and the impressive organizational machinery they have developed to pass their comfortable social positions on to their children.” Consider that in the case before the Supreme Court, Fisher v. University of Texas at Austin, one of Fisher’s key complaints is not that she was not admitted to the University of Texas, but that she was not admitted to its most prestigious campus, where she would be part of a much more useful and powerful social network. The issue, then, is access not just to education, but also, and maybe more importantly, to power. What students are demanding now is an education that will be both more aligned with our contemporary, increasingly diverse world, and an education that will distribute more evenly the power education allots. To some this is discomfiting.

As I have written before, when minority students are admitted to college, finally making some headway into this formerly sealed space of middle-class white privilege, it is often for the positive goal of “diversity,” precisely the linchpin of affirmative action. The Supreme Court’s defense of affirmative action has attested that diversity enhances the educational experience of all students. Yet when students of color are on campus they discover that the experiences they contribute to the classroom are often not only ignored, they are also sometimes dismissed or criticized. And this criticism is usually not rational or serious, but rather preemptive.

That's why it is not surprising that students are asking for a more diverse faculty, and for faculty in general to become more aware of the new demographics of their schools. It’s not about “sensitivity” training for the sake of protecting students from “the real world.” It is about honoring a reciprocal relationship wherein all parties can have equal access to and be full participants in an educational community. One can look at it also in terms of sheer pragmatics: Listening seriously to these demands is a necessary step toward creating what I have called “the new effective classroom.” Diversity can and should benefit all.

We expect the right wing to have a field day when the mainstream media insists on publishing and foregrounding clickbait articles that report the most egregious and outlandish cases of censorship and shouting down. But what’s curious is the way liberal types are making themselves allies of the right on this issue. The liberal will say, “Yes, we have to do something about racism on campus,” but then say that the reasonable demands we find on the top of this list are not feasible, too difficult, hard to get consensus on, or simply presented in an antagonistic and uncivil manner and therefore out of bounds.

Colleges and universities are essential places where one learns and teaches about the world, and today’s world is increasingly showing the stress and tensions that come with racism. The violence we see all around us makes it a moral imperative to discuss race in a real way. The lessons we learn in the classroom and elsewhere on campus will often be rough and difficult, but we shy away from them at our own peril. Students are simply asking for the resources we all need to make these conversations both honest and meaningful.