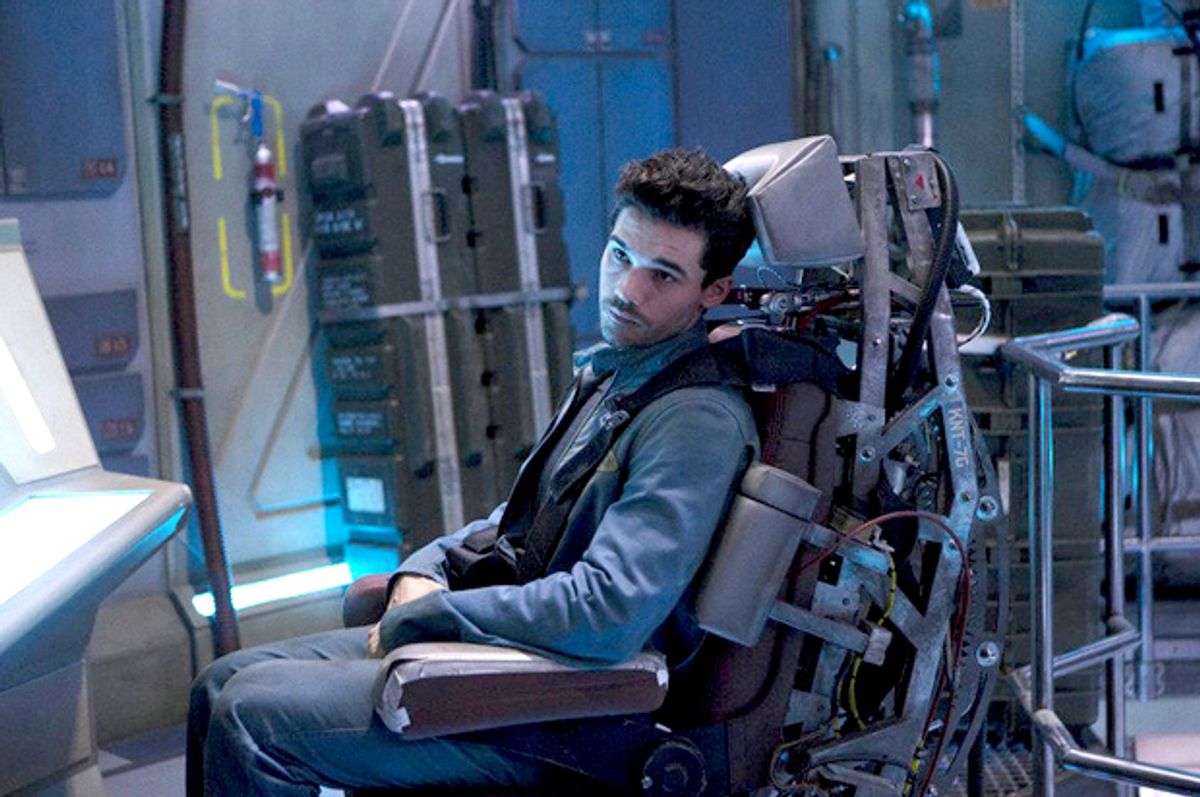 Steven Strait in "The Expanse" (Syfy)
--

The first thing that is immediately striking about “The Expanse” is its visuals. The title sequence for the first episode is an exercise in computer generated imagery that is characterized by restraint and artistry—think the award-winning opening credits to “Manhattan,” not Jar Jar Binks. The second is the series’ ambition. The opening title crawl introduces us to the 23rd century with a few quick broad strokes—Earth, Mars, asteroid belt, water in short supply—and then we’re off, careening through the solar system as if we are floating in zero-gravity ourselves. We’re introduced to an array of characters who are mostly isolated from each other—a few on a spaceship near Saturn, a few in a colony on the asteroid Ceres, and one or two on Earth, where the United Nations reigns supreme.

It is not easy, at first, to parse the dense information dump of the pilot. I had to watch the first episode of “The Expanse” twice, pausing at times to rewind and replay, paying close attention to even interstitial establishing shots. The world of the show has been invested in, right from the start—the look and feel of a seedy bar on Ceres; the physical deformities suffered by the “belters,” the working-class grunts who were born and raised in zero-gravity and mine resources for the inner planets; the current wave of dating apps, with suitors that wink and point at the user. This is a universe striated into classes and economies, with the tells buried in the details of each frame. It makes for a veritable thicket of a viewing experience, and that’s the type of thing that either reels you in, as a viewer, or encourages you to devote your time elsewhere.

Personally, I fell for the attention to detail in “The Expanse.” The first four episodes held my attention like little else has in this era of peak television, and a great deal of that is because the subject matter and treatment are right up my alley—a gritty science fiction epic that combines the Earth-centric politics and space-travel details of “Star Trek” with the wonder and romance of “Star Wars.” “The Expanse” is perpetually in a state of awe with the grand scale and changing rules of space, and has imagined whole ecosystems of minor industries, necessary inventions, and human adaptations to make live beyond the atmosphere feel plausible and lived-in. That’s not an easy thing to do. “The Expanse” does it across multiple episodes.

It requires, at least at first, a little bit of careful viewing. There are a lot of characters introduced very quickly, and in a sense, they are all sort of in their own separate TV shows. On Ceres, the asteroid, we’re following a Belt-born detective (Thomas Jane) hunting for a missing girl—and running into the water rationing riots that are beginning to convulse the tiny colony. A ship called the Canterbury, mining ice near Saturn, receives a distress call. And at a UN black site on Earth, the deputy undersecretary (Shohreh Aghdashloo) is overseeing the brutal questioning of a suspected separatist. Aghdashloo is Oscar-nominated for her performance in the film “House of Sand and Fog”; Jane used to have his own TV show on HBO. The rest of the performances, despite being lesser known, carry their own weight. This is a cast with previously overlooked or sidelined talent, finding an outlet for good work with rich material.

In that sense, it is a lot like Syfy’s biggest hit, “Battlestar Galactica,” which brought in Hollywood veterans like Mary McDonnell and Edward James Olmos to star in a sci-fi space opera about the near-extinction of humanity. But where “Battlestar Galactica’s" story engine ran almost entirely on mystery, “The Expanse” is a little more like “Game of Thrones,” with its intensely detailed and ever-broadening world inhabited by very recognizable characters.

It’s early yet to say if “The Expanse” will be as reliably good as either of those shows. But those are two good referents to draw from, when making a new genre drama. Ceres, in particular, is quite a coup for the show’s art direction team—the science-fictional third world, complete with dingy apartment complexes and squabbles over basic resources. An undernourished sex worker gives language lessons in exchange for little potted succulents that she can brighten up her room with. The asteroid’s subway system is a series of concentric circles. And the missing girl’s super high-tech future phone has a crack through the screen, but it still works well enough to keep using. Technology changes, “The Expanse” suggests, but people, with their foibles and flaws, stay the same.